Post a pic of the first guitar you ever made

I built this in a building class at Texas Toast Guitars in May. My first guitar was a 1962 Strat sunburst (yep, I am an old guy!). I played it until 1972 when I needed money to stay in college. Years went by and I decided to build an upgraded version of my first Strat. This one has a Strat neck, with a hand built body. I got a lot of help from the guys at StewMac when I was finishing the body.

I used Wilkinson pickups, added push-pull tone controls (dual range tone), rewired the 5-way switch to be a "7-way" (the small white switch) so there is tone control on the bridge pickup. Also, I installed an Artec compressor-expander (black knob) with a Fishman rechargeable battery pack. Once it settled down, it plays like a dream with light strings (Slinkies or D'Addario).

The double bound sunburst was my first partial build (binding/finishing) in 2010 and in 2012 I took on the Thinline build from scratch, body and neck......stole the rolling dice idea from someone online. I thought it looked so cool. Here is my latest build. This Strat has a Fender maple neck, and a hand-built body. I put on a Floyd-Rose (took a lot of reinforcing of the cutout at the top of the bridge hole). I added the 7-way switch (green switch) for tone on the bridge pickup. I put in the Artec compressor-expander, and the Fishman battery pack on the back. The Wilkinson H pickups are split, with two switches on the bottom horn. I routed the body to route the extra wiring under the pick guard. Installing the Floyd-Rose took some busy work to get the clearances without taking out too much of the body wood- added a piece of steel to reinforce the corner of the bridge hole. The tone controls are push-pull dual range, but I might change to push-push type of controls.

Sorry, before the Thinline, my first scratch build was a Walnut (George Harrison) build. Recalcitrant said:
Her groaty majesty. From 1999. I cut out the body with a saber saw.
Click to expand...

Here is my one and only guitar build. Many thanks to all the help I got on this forum.

bullfrogblues said:
not many pics but a bit of a story.
Not long after building this guitar, a friend of our son's came over and was somewhat distraught. He said his band had a gig but he had to sell his guitar to pay his rent. I brought out the guitar and asked how he liked it. He said wow, so I said it's yours! have a good gig.
this is Mason with it.
View attachment 1001429
About a year and a half later I heard that he sold the guitar but was too embarrassed to let me know. He sold it after a gig to the guitarist in a small touring band that ended up touring with Fugazi, even through Europe. So that guitar had some miles on it.
Fast forward to April of 2011, we went to our son's place in Gainesville, FL for my birthday. Somehow he had found that guitar, bought it back and gave it to my for my birthday!! What a son!! It shows some wear and I've done some work to it, but this is the condition in which I received it. Thank you for asking.
View attachment 1001430 View attachment 1001431 View attachment 1001433
Click to expand...

That's a great story! Thanks so much for sharing.
R MY 1st, all mahogany, good used squire neck, and an old set of Bill L pickups with 500k pots, 5 way switch, still is a killer in sound. This is my first guitar build, from 2000.
The top is solid (carved) redwood. Back is solid (carved) maple, with maple sides & maple/mahogany neck. Same dimensions as the 17” Gibson L5, but with an X braced top (D’Angelico style). Recalcitrant said:
Her groaty majesty. From 1999. I cut out the body with a saber saw.
Click to expand...

I built this Joe Strummer tribute Esquire in 2018. It’s ash with a semi hollowed out body (it’s heavy) and a used neck. I love it! 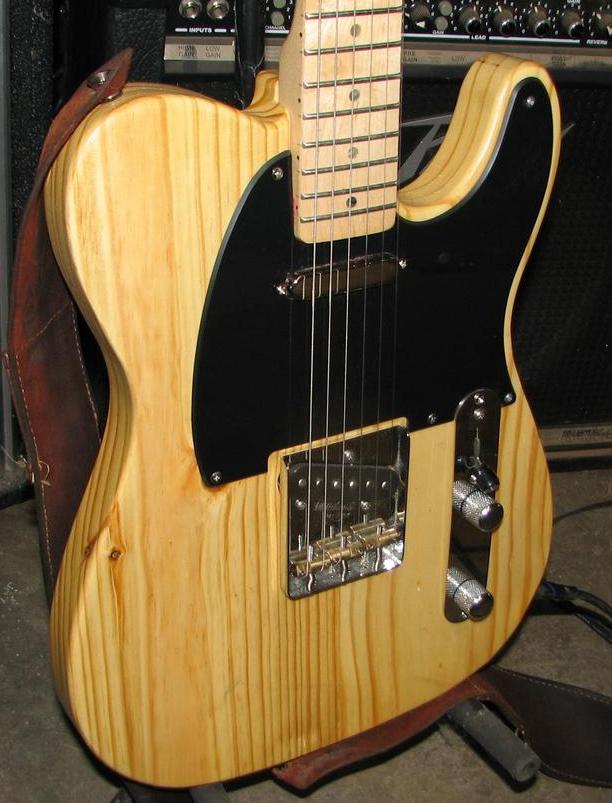 fabricator said:
This is my first guitar build, from 2000.
The top is solid (carved) redwood. Back is solid (carved) maple, with maple sides & maple/mahogany neck. Same dimensions as the 17” Gibson L5, but with an X braced top (D’Angelico style).

I hate you. If I built a thousand guitars I’d be grateful if I could build one half as nice as that.

Sweet! Is that a black stain or did you get that look with Shou Sugi Ban (torching)?

I like what you did with the neck plate/carve.

I went for a carve top LP, the neck is aftermarket. My first build was just the body. Dano style build using pine and mdf for top and back. I used an old neck that I had on hand and some wilkinson p-90's. It was terrible and I ended up throwing it out (the body that is). My second, and first full build from scratch is a double cut LP style with a set neck (24" scale) and a fender style head stock (no angle). A lot better then my first attempt, but not great. I loved the neck on it though. I built it entirely out of scraps that I pulled from the bin at my work, including the materials I used to make the truss rod. Bought cheap humbuckers off of Amazon for like $10. I'm not a fan of humbuckers and these didn't sound great to me... I keep making guitars that I don't really like, but I get better after each one... Made some new guitar stands.

New Radicals made only one album, but it was a good one