Please help me date my SG. Flowers and chocolates are no help.

Look what I found under my grandmothers bed. lol

I was hoping for some expertise in dating this good wood.

I've been trying to date a custom SG that I believe to be dated to '68 or '69. I know the walnut
finish first appeared in '69, with '68 being the last year of the alpine white SG customs. I have the
serial # and the pot #s and am hoping some expertise may nail the month and date of manufacture,
as well as the plant where it was made.

Some items to note would be that the i in Gibson is not dotted and the size of the pick guard.
The POT, according to dating figures has it dated to the 33rd week of '66.

I bought this in '72 from a young girl who bought it for her church band. Her words when selling it
to me were, "It's too much guitar". lol It was dead mint and she told me it had just been purchased new,
so I assumed that it was a '72 and for the next 40 years of playing her everywhere, I
had always said she's a '72.

It is possible that it was bought new, but new, old stock in '72. I don't know, but it was mint.
Lots of road scars are all my doing. Some savvy gents on the Les Paul forum told me years ago it
was possibly a '69 based on pick guard size and lack of the dotted "i" in Gibson. When I contacted
Gibson a dozen years ago, a rep told me records were a bit sketchy back then, especially for customs,
but he thought it may have been made at the tail end of '68 for the '69 release of the walnut finish.

I would still love to hear from any of the experts here
on its date of manufacture and plant. As well, what a ballpark
figure of its current value would be. The prices I've seen the last
few years have been all over the map.

Thanks in advance for any answers/comments you may have.
J 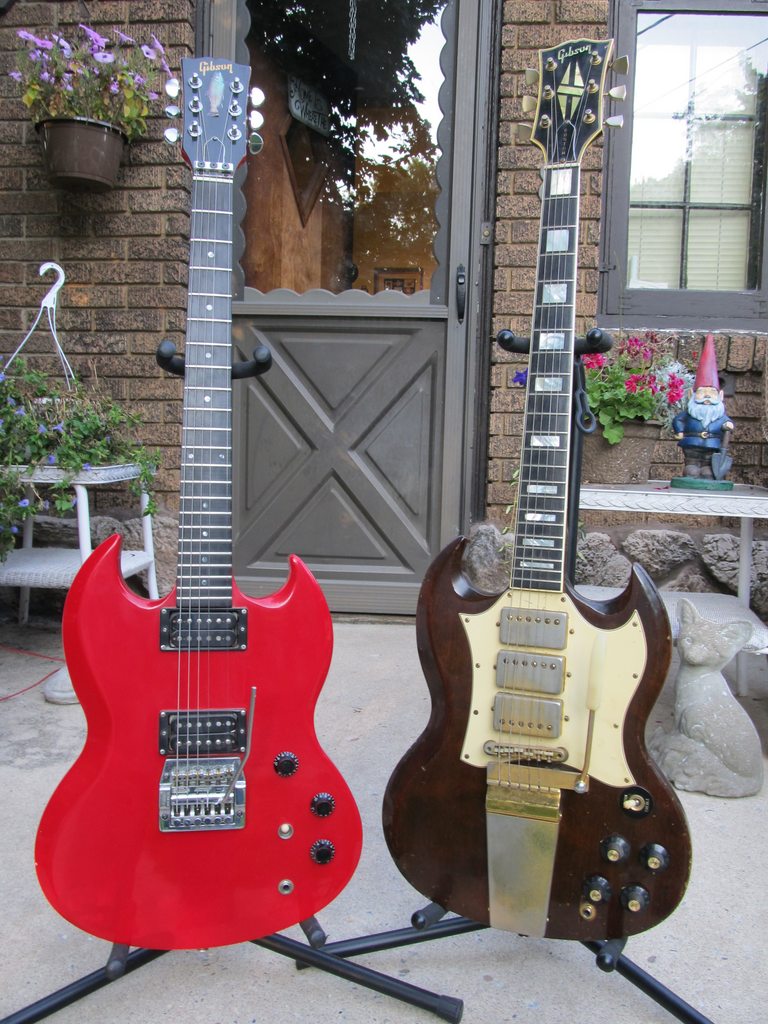 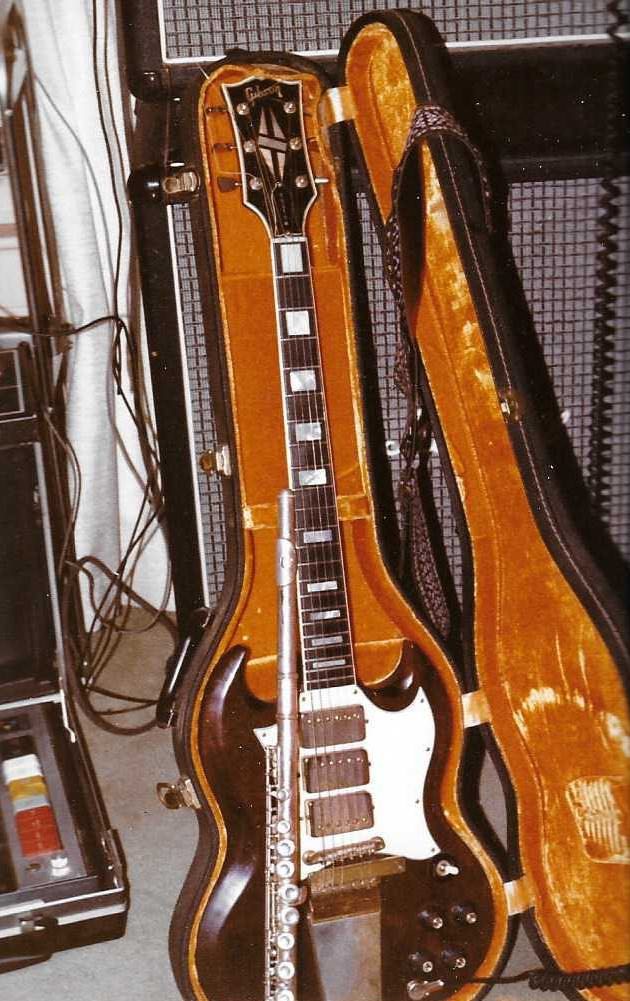 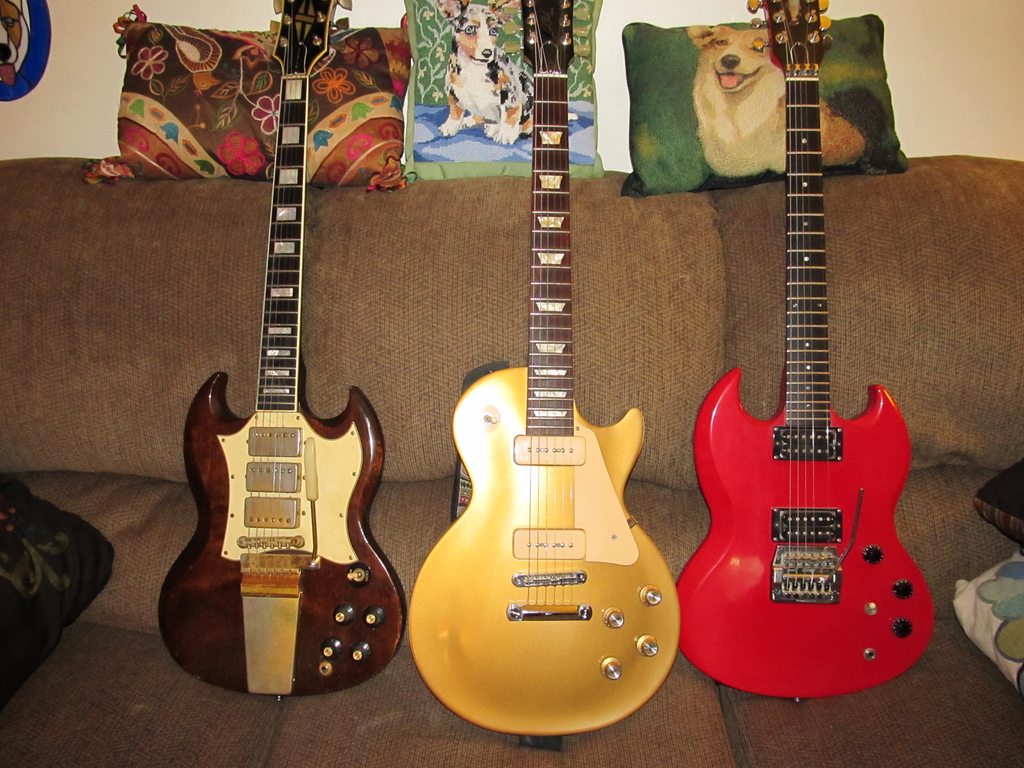 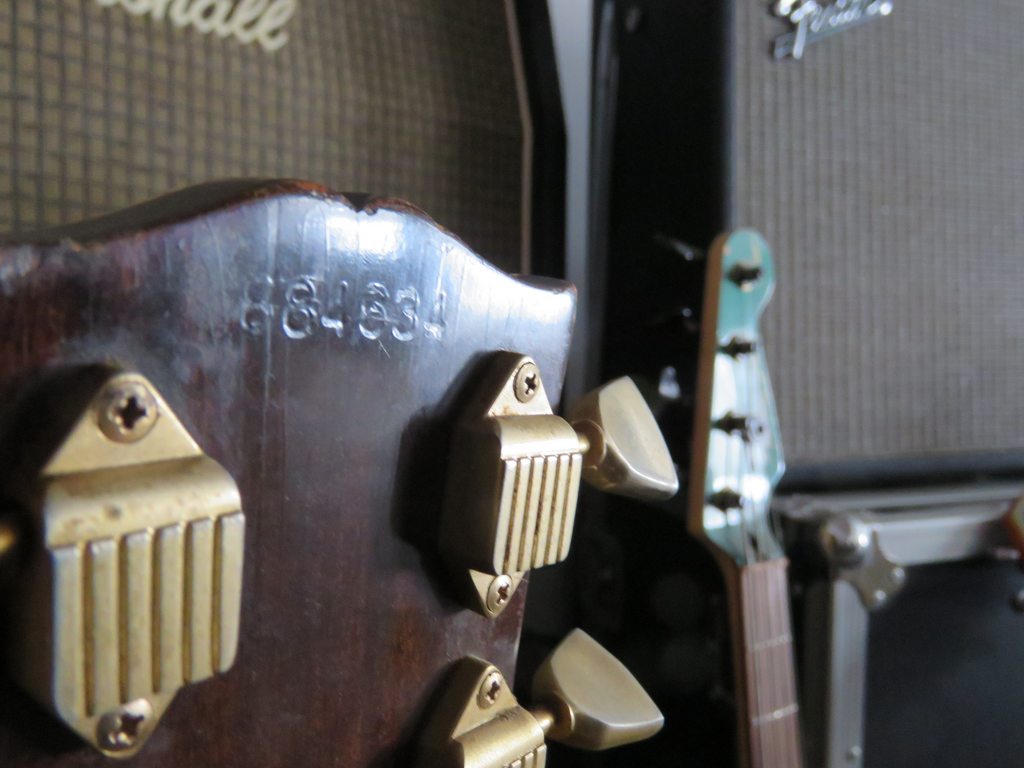 I'm going for an overall cleaning and string change. It's been a while since I've
had this one out of it's case. 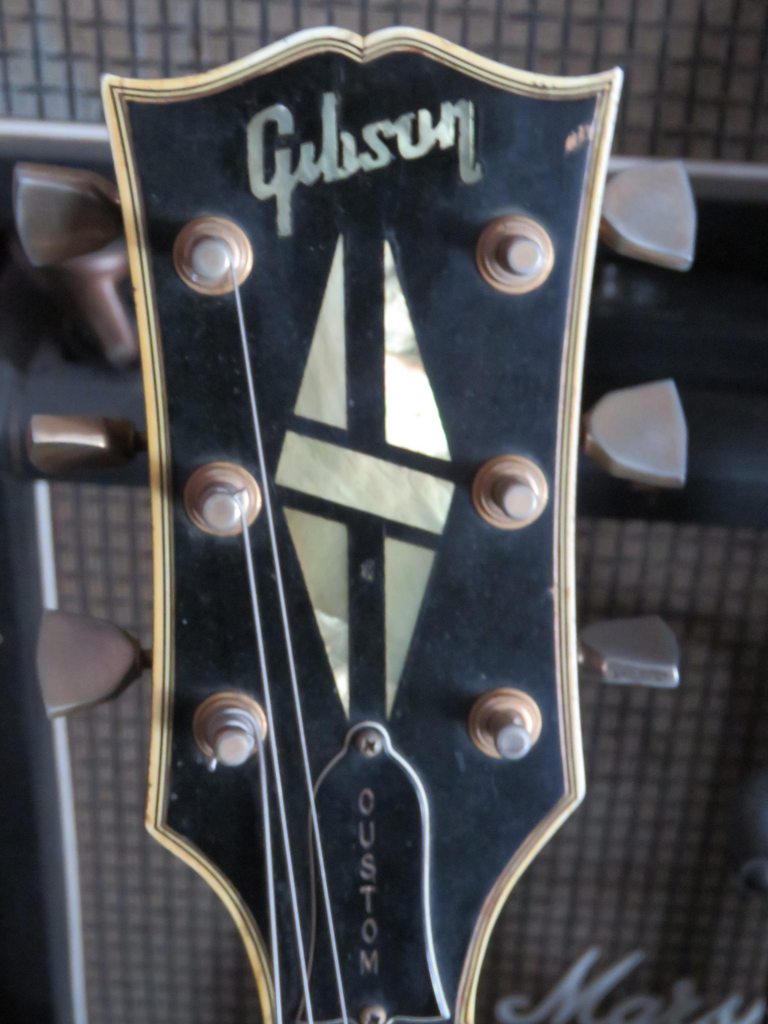 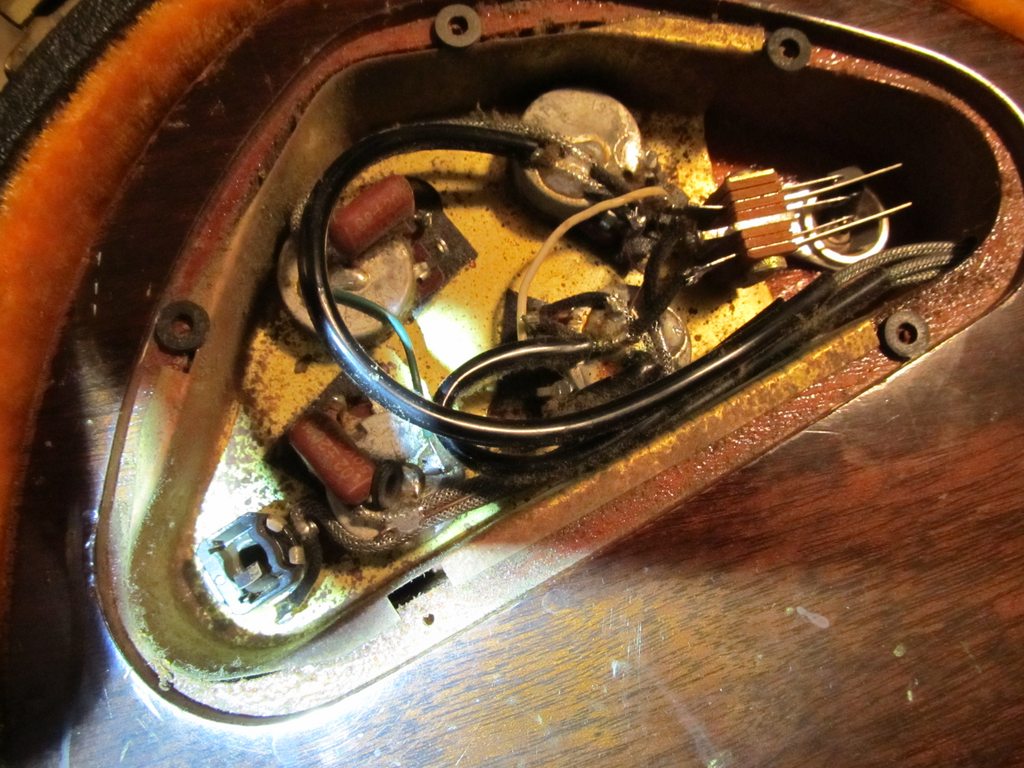 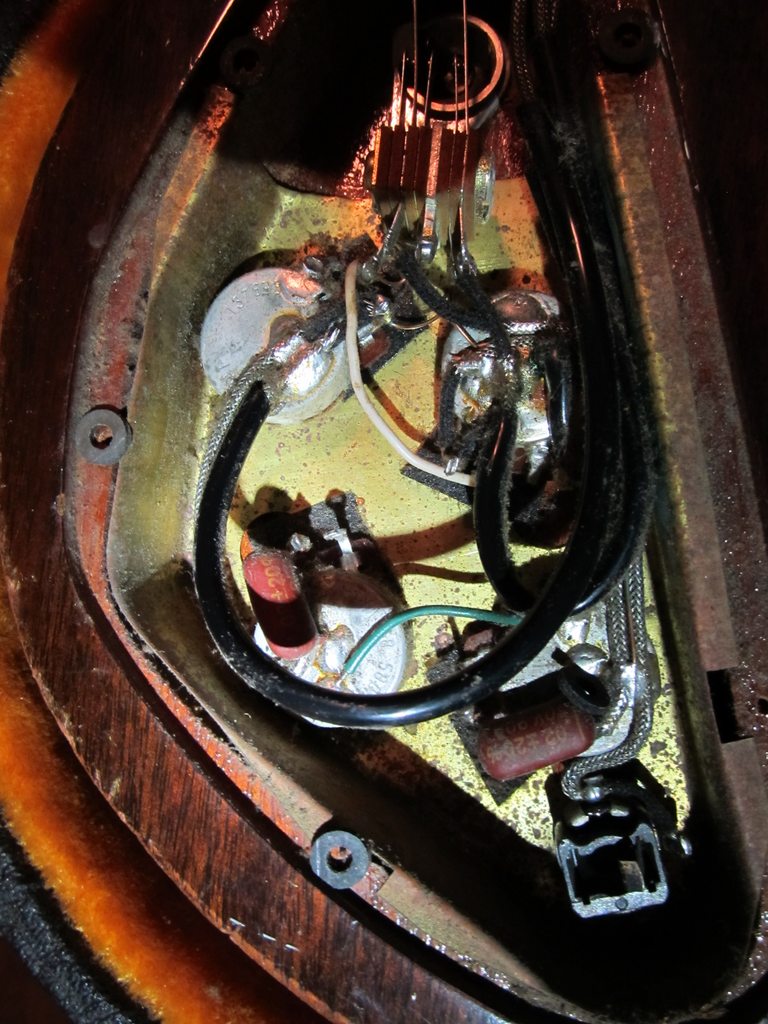 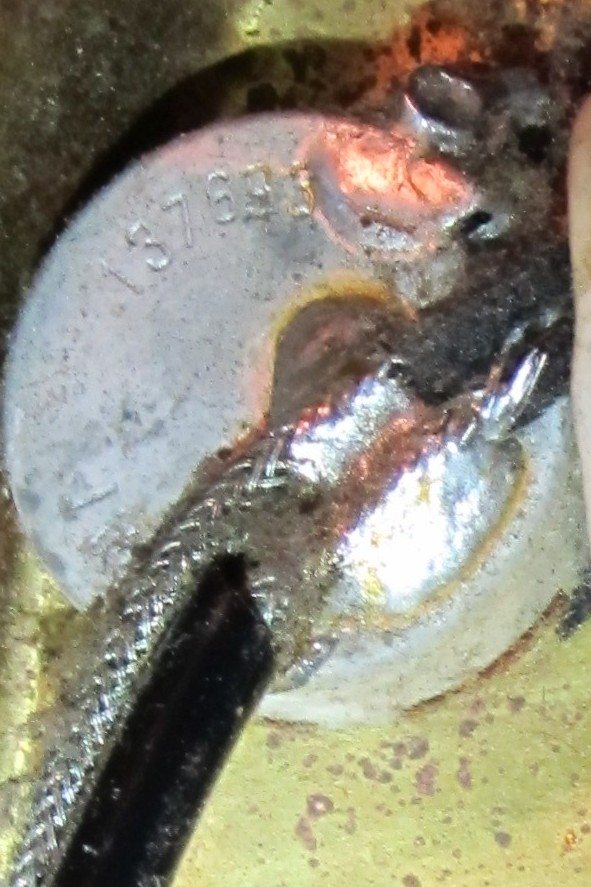 This picture of one of the pups was taken a few
years ago when I had the pickguard off. 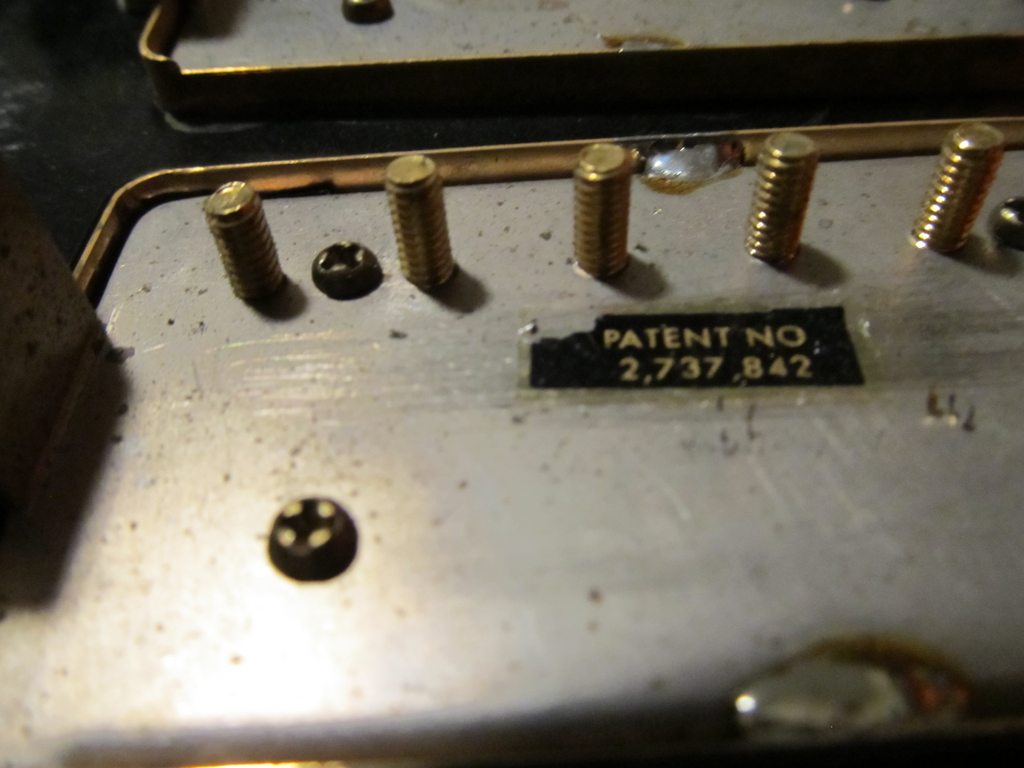 I'd date your SG.

Lots more photos would be helpful; back of headstock, close up of tuning machines, wiring under the hood, closeup of headstock, face of guitar with pick guard removed. those kinds of things.

I'd not only date that guitar, I'd make it breakfast every morning.

The date code on one of the pots looks like 137 693?, If that's correct it's a CTS made in the 30-39 week of 1969 depending on the number under the solder, I WOULD NOT REMOVE THE SOLDER just to find that last number. those pickups were made until 1975. my guess would be 69 or maybe 70 depending on how long Gibson kept their inventory of pots. Gibsons serial numbers are not always sequential and some were reused so those aren't a sure way of dating it.
P

The Red SG looks like a Fake, looks like it has 3 screw truss rod cover, hard to tell?

Have you tried asking it out for dinner and a movie?

What I have heard if the pickups have black wires from the bobbins to the plate they are 65 or before and white is 65 to 72ish. It's hard to clearly see the pot numbers with just photos if it looks like the 5th digit is a 3 and not a 9 then that dates it end of July to the end of September 1963. The large pickguard dates to after 1965. With the serial number it is likely a 1967 + or -.

Sorry I also can't help you on dating the SG Custom, but it is a very nice one!

To me the red SG looks like and SG Special from the mid-80s that came with the Kahler from the factory; I'll defer to @belleswell for model verification. I remember 2 SG Specials from back then - HH and an HSS version - both had Kahler Flyer tremolos.

This has been an unexpectedly funny thread, I have no idea or knowledge regarding SG's except that Angus Young plays one but am glad I stopped by anyway.
Beautiful guitar by the way.

Does your SG have a sister?

Is there a volute? Your photos don't show.

It's dangerous to play a guitar that old. Could be an electrical short.

Ship it to me and I'll see that it's properly disposed of.
You must log in or register to reply here.