Yonatan said:
Possibly I just need a better quality wood. I actually have various pieces of hardwood, but I wanted to do another pine build.
Click to expand...

maybe its the steel of the chisels?
Some don't sharpen that good.
i don't know how things like hardware stores, construction markets are in Israël and if they are well sorted in products.
do you have something like that nearby ore do you need to buy online?

Got the templates made (coping saw -> files/sandpaper) and started routing the cavities, stay tuned.

And, yes, this is my first Jazzmaster build, I now know all too well that the (deeper) control sections should have been routed before starting on the pickup cavities 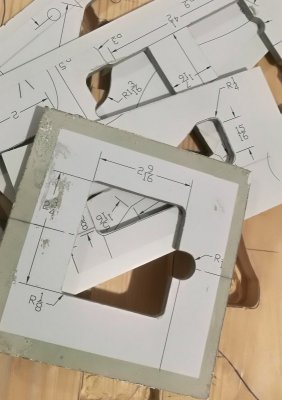 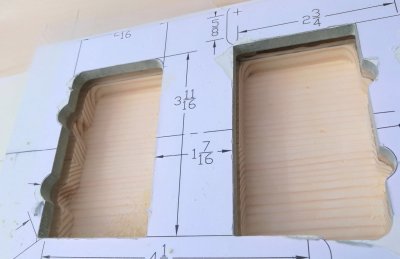 Got the cavities routed, next I'll finish the body shaping. It's starting to look like a JM! 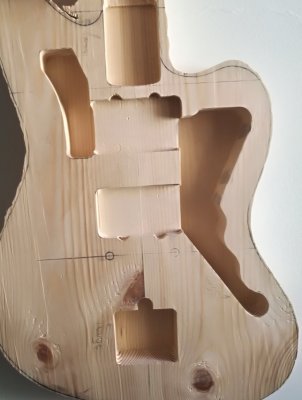 Yonatan said:
I now know all too well that the (deeper) control sections should have been routed before starting on the pickup cavities
Click to expand... 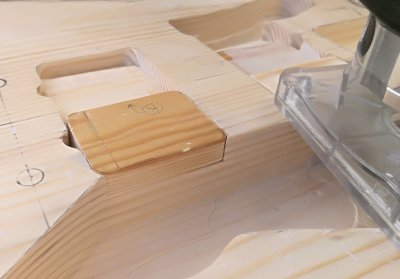 if you haven't already, get your pick guard and control plates, assemble the pots and switches.. so you can do a "dry fit".. not all of them are the same.. and subtle corrections in the routs will probably be needed.. it's nice to have them done NOW rather than on assembly day..

and mount and check the tremolo so there's full range of motion both up and down.... it's easy to mount it, checking the down action and forget the up.. IN that movement the internal mechanism can collide with the internal forward wall and prevent movement.. it's an easy fix with repositioning, but can be a horror if you unwisely waited, and drilled pilot holes in a nice new finish..

a JM is actually a rather easy guitar to build.. it's just there are a few little "bumps" one needs to be aware of...

Body contouring in progress (this is one of my favorites parts of the build):

I'm roughing out the roundover first with a rasp, before switching to the contoured sanding pad. I thought about drawing guide lines along the edges but decided to just skip the fuss 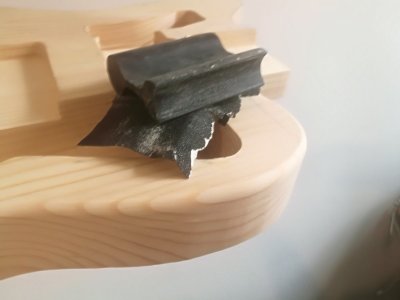 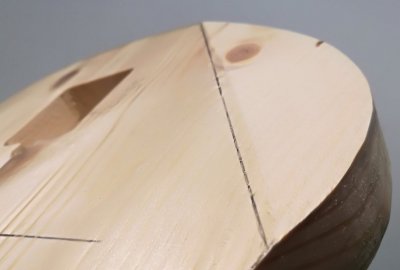 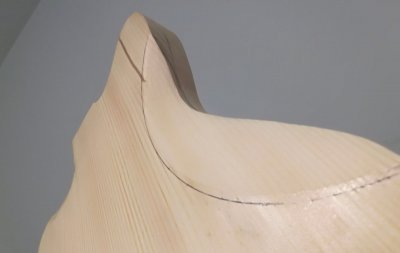 Still have a bit more contouring to go, but I know that I'm getting close because it's starting to become too slippery to even hold, like one of those Strat things! And we have one Jazzmaster body, that was fun! And now comes a Catch 22 which hopefully someone can help me solve:

I'd like to get the hardware holes drilled before putting a finish on, and what's left is the vibrato unit, but while the lateral placement is trivial (just center it), the vertical placement has a bit of room on either end i.e. it slides by just a bit in the cavity. The problem is that I need to make sure that the vibrato mechanism doesn't catch on either side of the cavity in its fullest range, but on the other hand, it would seem that I can't really test out the movement of the mechanism until I get it drilled down!

Edit: I observed the movement of the mechanism a bit (looked in from the side), it seems like I just need center it in the cavity vertically, and then nothing will catch on the walls. That is looking good!

The inside corners of your templates can be perfectly square if you are using the same radius for every corner. The reason is the cutter's bearing that follows the template will park in the corner and the cutter's radius will make a perfectly identical cut in each corner.

If a chisel is causing tearout, it could be due to one or two reasons. The edge is not sharp enough, and you're taking too big of a bite. And compared to harder woods, it's more difficult to get a nice clean slice in softer woods like pine because the fibers are more easily compressed.

Drilled holes cause the finish to build up around each hole and it makes for more work leveling the finish. It also presents a problem when wet-sanding because the goop gets into the holes as you work. If you use water, it can swell the wood around each hole. Some builders fill screw holes with beeswax to prevent this, and it works--but it's extra work. Some builders wet sand with mineral spirits (doesn't swell the wood), but then you have to clean the goop out of the holes.

I don't drill any holes until after I shoot finish, wet sand, and polish. And I use mineral spirits.

About drilling the holes now, you're making me reveal my true motivation which is that I want to try it out
(Not sure when I'll build a neck, for now I'll use an eBay Strat style neck that is sitting around not doing anything useful.)

Yes, I know, not a good idea to start using it before getting a finish on, but the finishing process for me tends to drag on for weeks and weeks, so I thought I'd try it out for a bit, never having owned (or even played) a Jazzmaster!

Yonatan said:
Yes, I know, not a good idea to start using it before getting a finish on
Click to expand...

About three years ago I made a Strat body from alder and left it unfinished. I installed some killer Rumpelstiltskin pickups and a Warmoth neck. This was an experiment to see if there was a marked difference in tone over a few other Strats I have with Rumpels in them. You know--the ol' "thinner finishes sound better" assertion. Rather that simply regurgitate the stuff I read on the innerwebz, I try to reach a conclusion based on fact and not confirmation bias.

No difference at all.

Peegoo said:
About three years ago I made a Strat body from alder and left it unfinished. I installed some killer Rumpelstiltskin pickups and a Warmoth neck. This was an experiment to see if there was a marked difference in tone over a few other Strats I have with Rumpels in them. You know--the ol' "thinner finishes sound better" assertion. Rather that simply regurgitate the stuff I read on the innerwebz, I try to reach a conclusion based on fact and not confirmation bias.

My concern wasn't about the sound changing, but about dinging it up while using it. Last time I put a guitar together before finishing it, it took me months to bring myself to take it apart again to do the finishing

So, it's been a while. I had installed the bridge, bolted on a neck, and threw a pickup in it to try it out. I mainly wanted to make sure that the vibrato system was working, as the unit I got has some strange click in its motion, but it turns out that when it's installed, the click does not happen at all.

Anyway, after getting a "teaser" of what it's like to have a Jazzmaster, I disassembled it and sealed it with shellac as the first step in the finishing.

But then I realized that I wasn't happy with the shaping:
1. It wasn't contoured enough
2. The roundover (which I'd done by hand) wasn't consistent, this became apparent looking from various angles

So the bits of color that you are seeing here are the remnants of the shellac, after further contouring and shaping. I think it's a good as it will get - I struggled with parts of the roundover due to the pine's early grain/late grain thing (i.e. see the part I circled), but at this point, I've decided to embrace it as a natural feature of the wood I think the only way to avoid it completely would be to fill along the edge with wood filler and then reshape, but I don't really see a reason for it.

Anyway, really glad I took the time to rollback the finishing process and get to a point where I'm satisfied with the results! are you going to color it again?
i think yo did a great job with the tools you have and the wood you used.

hopdybob said:
are you going to color it again?
i think yo did a great job with the tools you have and the wood you used.

because it is core wood i would advise you to close the whole guitar in some kind of protecting finish
also everything on the inside so no moisture can be soaked in when you have rainy days and high level of humidity
Click to expand...