I say Framptons a legitimate player, with a hell of a resume. The Herd, Humble Pie, George Harrison, David Bowie - Glass Spiders Tour and more. I'm actually reading his book now. He was a real guitarist who let management make a lot of bad decisions. Pretty good read about the business in the hay day. Didn't know it he was on the short list to replace Mick Taylor in the Stones. Probably not a good fit. Checkout his instrumental album Fingerprints
Last edited: Jan 17, 2022

Always had problems with the identity of the music of Humble Pie. Their albums would have 3 songs with
a country vibe, then 4 songs r/r then maybe old school jazz or show tunes stuff. You could feel the different
"pull" of the different musicians in the group. They all had different interests, and it showed.

Talk box or not, Frampton was (and still is) one helluva player. He has a unique style, kind of jazz oriented but at the same time, really rockin'.

Frampton rocked his ass off on his farewell tour a couple years ago! I will admit that the talkbox got a bit old!

Saw him on the when he toured supporting the Framptom Comes Alive album. Great time. Great player.

Cadillac_Mike said:
Sure, I just don't get the mentality of "A talk-box is figgin sweet man!" but synthesizers "like suck man!" To me it comes down to Frampton making a geetar sound like synth vs. the uncool method of keyboards in the studio...
Click to expand...

Peter Frampton never tried to be "Metal" and "trve" and "br0000tal".
Guys who approach music that way need to think about their image and in the context of that image synths are worse than Hitler.
At least they were in the 80:s. Oh... on a related note, here's the keyboard setup used by Kiss(Mr. Gary Corbett on the keys): 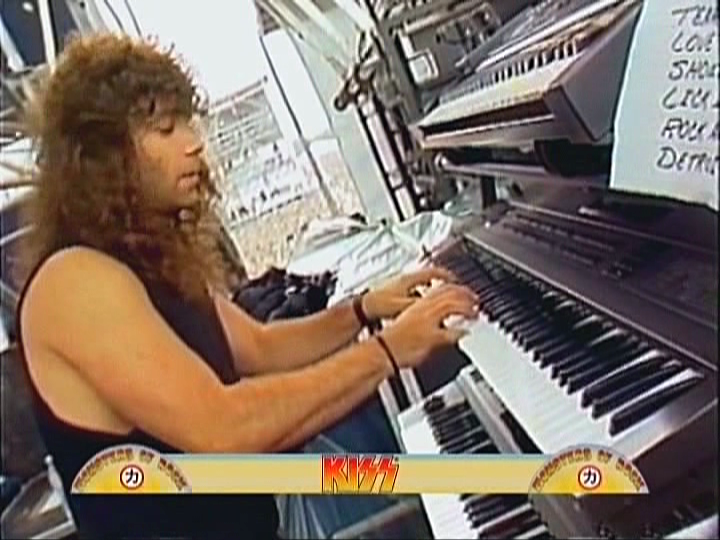 He Rock'n'Rolls all night and parties everyday. You just can't be allowed to see him do it.​
None of this is visible, of course.
It's hidden behind a curtain because as per Gene Simmons; keyboards aren't Rock'n'Roll.
"But their songs don't contain keys apart from maybe one or two ballads", you say... well... Mr. Corbett up there
even doubles notes of Gene's bass solo. You can't really maintain the best tone and touch in the world
if you're flapping around the stage hanging from a wire harness now can you? So, guess what...

Many other rock and metal acts hide the unsavory elements from sight behind curtains as well.
For me, this comes across as extreme teenage insecurity but what do I know... ? They sell millions.
At least it's better than using synth backing tracks and playing to a click "live".

I’m not sure how anyone figures that a talk box is any more of a gimmick than a wag wag, phase shifter, chorus, or any other pedal.

As for selling out, the fact that an artist doesn’t write the same stuff for 20 years doesn’t mean they are “selling out.” I have more respect for an artist that evolves than one who plays it safe, pumping out the same dreck their entire career.

Frampton's band around the year 2000 was tight as hell.

James824 said:
Frampton's band around the year 2000 was tight as hell.

I just finished watching PF Live in Detroit, with this band, from 1999 on Prime.

To be honest, I had not really given him any serious consideration or appreciated how talented he is. When FCA came out, all the hype and radio play turned me off. But now I have a new attitude.

Typically, I'm not a live album fan. However, FCA is not just a good album, it's a great album - bought it right when it came out. Really captured the vibe/time of the era. I still think PF is an underrated guitarist.
W Peegoo said:
Before it was a called a talk box that sat on the floor, it was called "the bag" and you wore it hanging from a strap over your shoulder, like a purse.
Click to expand...

knopflerfan said:
Typically, I'm not a live album fan. However, FCA is not just a good album, it's a great album - bought it right when it came out. Really captured the vibe/time of the era. I still think PF is an underrated guitarist.
Click to expand...

My favorite playing of his were with Framton's Camel and Humble Pie. Of course anyone can sound good with Steve Mariott at the wheel.

Saw his first tour in 76 or 77 after split with Humble Pie or Camel.
Camel name was on gig crates.
It was in West Palm Beach with Gary Wright the opening act.

He was darn good. Ya the talk box was weird, especially if you ingested organics before show.
I think I like Joe Walsh talk box stuff better.

I always dug Joe Walsh’s talk box/talk bag excursions more than anyone else’s…but because he didn’t use it on every song, I never thought of it as too much if a gimmick, just a tool that he used—even though he was known for using it, it didn’t define him.

I started choosing my own music right around the time Van Halen’s 1984 came out. I never considered the evolution of the band (or ZZ Top’s Eliminator, which came out around the same time and also included synths) as a sellout…even after I discovered those band’s older music, I didn’t think it was a bad thing—it was just a new chapter in their book.

I still think these songs were made popular by DJs who either needed to take a smoke break or take a poop.

Cadillac_Mike said:
Extremely dreamy! He looks like my dad before he lost his hair lol
Click to expand...

I bet Pete’s upset at him!

It's funny how people hear "Frampton" and immediately think of the talkbox. He used it on two songs that I can think of, Do You Feel Like I Do and Show Me the Way. Are there any others?

I've got nothing but respect for him anyway. We saw his farewell tour show in DC and he blew the roof off the hall. I hadn't realized what a total monster player he is.

I saw Pete, I was 13, he was on a UK tour with Deep Purple and Thunder. If I'm honest, I knew thunder and purple alot more than I knew Frampton.

If I'm being completly honest, we'd planned Framptons middle set as "wandering around time" (in my defence I was 13, with a mate and no supervision!). I'd never really heard of him, and was mainly into Iron Maiden at the time, but a chance to see Thunder and Purple was impossible to miss.

Frampton came out and absolutlely wailed. What a player. I've been a fan ever since. I went to the gift shop and bought a keyring that played the riff from "do you feel like we do" and everything.

I got a notification about his farewell uk tour, he's playing in Stoke, I'm tempted but the tickets are pricey.

I wonder if his actual last name is Frampp.

Peasant: "If she floats in water, she's a duck."

All the peasants: "A WITCHHHH! BURN HER!"

Frampton is one of those rare players in rock that frequently incorporates chord voicings commonly used in jazz. Two other players that do this are Randy Bachman and Dean DeLeo.
You must log in or register to reply here.