I'm considering building a partscaster Esquire. I have a neck and already ordered a body (not routed yet). But: I can't really decide on a pickup. I narrowed it down to five possible candidates though. I already have a Tele with a Broadcaster type pickup, so for the sake of versatility this one's not an option.
For those who choose their pickups based on which kind of wood the body is made of - there's a reason I didn't mention that. I simply want your opinion based on the pickup's character/construction alone.

So, fire away! Which one would you choose and why?

Too many variables given the info....

Is the neck maple or RW fretboard?
Brass, Steel or other saddles?
Wiring?
Amp?
And the big one.....what tone are you going for? A3, A5 or a mix?

I have a ceramic magnet Tele bridge pickup from Budz - it has adjustable poles. It’s some Tele and some P90, and a blast to play if you want something to push the front of your amp and have great dynamics. I tried it in my Tele, then took it out and have a body and neck on the way to build an Esq around it - probably to run in open A.

For me, if it’s an esquire, it needs a Tele bridge and Tele shaped pup - but it’s your guitar, and you get to decide ;-)
S

I've had very good luck with using SD's Hot Tele in my builds... it seems most of my customers get a major kick when they try my JV Squier that sounds VERY early-Zeppelin! So I end up ordering this great unit most of the time. Great Jeff Beck twang with both pickups on, but you won't know... ;-)

I'm considering putting an Esquire together and I'll definitely be using this classic PU.

Take some index cards and write these options on one each. Throw the cards in the air and let them fall where they may. Pick one up at random and use that pickup for your build. If you don’t like what you “pickup” first and cheat by picking another, then you probably already know what you want. If it comes down to two, repeat the ‘throw in the air’ step. This method works, always
S

I say use a Stratocaster Bridge and stick a P-90 Screaming Dog Ear in front of it with an Esquire Eldred Mod 3-way.
That way You've got the POWER and the versatility.
And some people set it up with the Guitar Fetish Neovin which uses a stock Telecaster Bridge with great results.
The Neovin is freakish in that it can buck the hum, and cleans up nicely too and...looks like a single coil Tele bridge pickup. Some other people just set it up with no switch - Les Paul Junior Style with a Neovin.

Esquires are COOL.
Make sure to check out Mark's 1953 Esquire on YouTube.
"Honey, it wasn't The Devil - it was Mark."

If you’re using traditional or Eldred wiring, I recommend a Cavalier Fat Lion.

If you want more output options, I recommend a Cavalier Hydra Lion with taps for the Huge, Fat and Bakersfield Lions.

Or, mix them up – use the Hydra Lion pickup with a 4-way switch and make the 4th position your Eldred or traditional Esquire capacitor (just wire it up to your favorite of the three taps). Then if you want that wide-open (bypassed tone pot) sound, use a no-load tone pot.

You can thank me later on the Cavs...

BorderRadio said:
Take some index cards and write these options on one each. Throw the cards in the air and let them fall where they may. Pick one up at random and use that pickup for your build. If you don’t like what you “pickup” first and cheat by picking another, then you probably already know what you want. If it comes down to two, repeat the ‘throw in the air’ step. This method works, always
Click to expand...

Oh I did that already. Ruled out DeArmonds, Lipsticks and all. It was those five that were left.

I played all of the above mentioned pickups in various guitars and liked them all for different reasons. I'd build five guitars if I had the funds. Just wanted to know what the community would do. So far - surprise - traditional tele is the winner.

baiff said:
Too many variables given the info....

Is the neck maple or RW fretboard?
Brass, Steel or other saddles?
Wiring?
Amp?
And the big one.....what tone are you going for? A3, A5 or a mix?
Click to expand...

Basically I agree. But the point was to go solely by the "character" of the pickup. Taking all the factors you mentioned into consideration and pinning them down, a humbucker would still be different in sound and dynamics than a single coil pickup.

I voted for P90 because a) it's different b) it's not too different c) it's powerful enough to be on a single pickup guitar d) I have GAS for a LP Junior.

How about a tapped tele bridge pickup like a Cavalier Twin Lion or Hydra Lion?

The Huge Lion winding would get you into P90 territory and you could pair it with a Bakersfield or Nashville winding to get you into more conventional tele bridge tones while still being distinct from a Broadcaster spec pickup.

I voted for a Tele pickup on your Esquire, but I play this Blacktop HH converted to Esquire (chunky neck I like).
4-way switch for neck, parallel, bridge, or humbucker. It's a two wire pickup I dismantled and converted to four wire so I have two separate bobbins to control with the switch.

The humbucker is set low with the screw poles cranked up high and level with each other. So I get distinct tones out of each bobbin. I roll into the tone pot some to do a good Tele neck single coil tone plus pick closer to the neck. Parallel I can creep into Strat Quack with strumming over the fretboard high frets. Easy Tele twang with the bridge side single coil with the tone pot wide open and picking closer to the saddles. Regular Les Paul duty with the full series humbucker and picking forward of the pickup with palm muting under high gain.

It's one of a pair of ebay humbuckers that go for $15/pair... it beats out most of the famous and popular branded after market pickups I've tried (that tend toward too muddy). 16kohm ceramic magnet humbucker, so 8kohm bobbins. 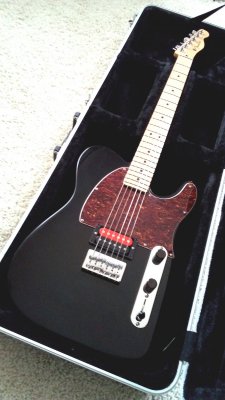 I have a Lindy Fralin Blues Tele bridge in an Esquire with the Eldred Mod and that is a very good option. It would be a classic Esquire pickup style choice and you should start there. I found an Esquire or a Les Paul Junior will teach you to play better, at least it did for me.

I would suggest any of the hotter wound Cavalier pickups or a Florance Voodoo TE59 wound hot.

If using the Eldred mod do not be afraid to try out some different caps. I use a 2200pf (2.2nf) or a 3300pf (3.3nf) for the Eldred cap. That will give you a usable tone that is just a slight bit darker than the other two positions. It is not the blanket over the amp sound as when using larger caps.

I would also suggest a .022uF for the tone cap too. That seems to give the tone control a bit more usable range.

EDIT: Forgot to mention that I would wire the normal bridge switch position so that the signal bypasses both the tone & volume control - straight from the pickup to the output jack for the true sound of the pickup.

I voted for the TV Jones, simply because it is a different choice. No experience from me at all with 'em. My Esquire project is getting a SD Broadcaster. Project Tele #2 is probably getting the SD lil 59 and neck stack combo. Project Tele #3 looks like it is gonna be some sort of whacko thinline with TV Jones PUPs.

I'd go PAFs all the way- a set of Antiquities. You get the old vintage look, with a completely different sound than a normal Tele, and a great alternative vintage sound to your other Vintage-styled Tele.

Twin Lion was actually on my mind when thinking about a more traditional pickup. That'll most likely also cover LP/P90 territory... AND bakersfield twang! yummy.

I like the bridge of the Modern set of Lil' Punchers. The Hot ones sounded like mud and the Vintage was too thin, but the Modern was like the 'just right' porridge! In fact, I like it/them better than the set of Gatton Bardens I paid 6x the price for.

You didn't say what kind of sound you're going for, but I can't imagine having anything other than a tele bridge there. I used a Fender Original Vintage pickup in mine, and I love it! Also added the Eldred mod, so there's a wide range of sounds available.

I put a Lindy Fralin high output split humbucker in mine and I really like it. Using the Eldred wiring scheme and shielded control/jack cavities, it's dead silent and gives me some pretty mean sounding tones for the garage/indie rock I play. Pricey, but worth it IMO.