Opinion Concerning What To Do With This Guitar A non-musician friend of mine inherited this old Goya. He asked me if I wanted it. I thanked him but said no. I then pointed out to him the damage on the neck and the cracks on the top and back, see photos. He asked me what he should do with it, so I’m asking you for your opinions. Is it worth the effort of trying to sell it for whatever he might get for it? Try to donate it to a music program (believe it or not, even as is, it actually doesn’t sound or play that bad, even strung only with six). Find another musician who might want it as a freebie? Or just trash it?

Would be a cool project piece for someone willing to take it on. Free or cheap. That’s you and your buddy’s call. Or detune slightly and a cool wall piece. Idk if I’d toss it. As I’m positive SOMEONE would like it. For either of those reasons.

Don't trash it
Don't give it to a kids music program
Look for a buyer who will fix it
If no paying buyers, look for a repair shop to give it to
Last resort maybe a bar will hang it up as decor!

That makes my fingers hurt just looking at it.

I believe it would make an excellent wall decoration. Maybe stick a geranium in the sound hole.

oh I agree. But I can understand selling it cheap, providing the buyer knows and is aware it’s a project.

I can't really see the model number to get a true idea on prices, but I do see it was made in Sweden, which seems to generally mean a higher price tag on Goya guitars (based on a brief web search).
I'd look up the specific model and seee what they are generally selling for. And then adjust the asking price downward accordingly, based on the damage to the guitar.

If you have an open patio, remove the strings and hang it on the wall, protected from the rain.

These are called "bird house guitars" for a reason

Peegoo said:
If you have an open patio, remove the strings and hang it on the wall, protected from the rain.

These are called "bird house guitars" for a reason
Click to expand...

If it's for bats, that headstock should be fixed first. 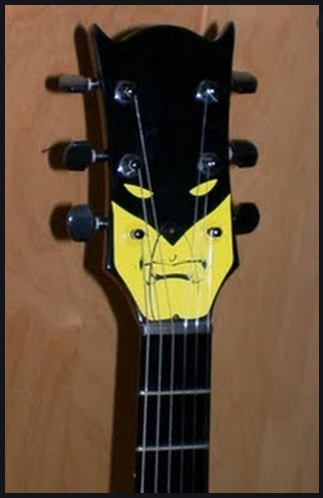 I had a Goya that looked similar to that. Mine was in good shape, except the bridge had a crack in it. It was still very playable but I decided to donate it. I sometimes wish I kept it and got it fixed. It was my father in law's. Not sure how old it was.
B

The cracked Goya 12-string converted to 6 would be useful to me - wide string spacing's good for fingerpicking. and slide*. I'm accustomed to a classical.

The little metal pins where the strings come out of the bridge ? that has to do with the conversion from 12 to 6 maybe?

[edit- Did something about the original (12-string) bridge plate underneath necessitate the little pins? If so, wouldn't that hint that a knowledgeable person converted the guitar from 12 to 6 strings?][OTOH admittedly, the spacing of the string slots on the nut could be more centered to the fingerboard][btw That's a truss-rod cover on the peg side of the nut, right?]

Granted, very likely its sound would be less bright* than the sound from a guitar built to be a six-string in the first place.

But I WOULD like to know whether (imaginably) going back to 12 strings ... would the pull of 12 strings burst the headstock crack? hmmm. As a wise man once said, "YOU CAN'T FIX A BROKEN HEADSTOCK" - Lester P. Gibson [sarcasm]

You pro-landfill and bathouse and houseplant people know body cracks like these don't matter at this level. Live with it! like your Sunday-best suit is a little tight

@Super30 in post #11 has 1st-hand knowledge of a veteran Goya, and common sense. People in Sweden knew how to make a guitar and knew wood. And had forests.

*slide tones are SO ATTENTION-GRABBING that, ime, a little mellowing can be a GOOD THING.
you wanna get gnarly? 1st establish the mellow, then pick down close to the bridge.
Last edited: Sep 23, 2021

Guitars like this are an ideal way for newer repairers to learn skilled required in restoring old instruments - the techniques are the same as you would use working on a valuable old Martin or Gibson, the guitar is good enough to be worth saving and there's enough value in it once fixed to cover a reasonable amount towards the time spent.

If I didn't know a worthy recipient (well, if this fell in my lap I'd want to bring this back to life myself) I'd list it on Ebay with a low starting bid and no reserve, let the market decide what it's worth as is. Someone will want to sink their teeth into that one.

If it goes in a bar someone should start a rumor that it once belonged to Kitchener Leslie. Somewhere Norm MacDonald would be smiling.

if it were mine, I would fix the broken head and complete the conversion to a 6 string by cutting off the top. plug the tuner holes & re-drill (may want a veneer) get new tuners. a new nut and body repairs as required

List it on the classifieds here for the cost of shipping to someone?

That's what I would do.

The guitar needs a huge amount of work - the cracked head is very difficult to fix (and even more so on a 12 string). I'm going to assume the neck angle is bad and the frets are shot (you don't show pictures). It happens that I do fix basket case guitars like that - it helps me improve my lutherie skills. I've even paid a few bucks for them at yard sales to get something to practice on. If I can get them fixed to my satisfaction I donate them to the local school music program.

Find a luthier-wannabe in your area and if needed, put them in touch with me - I can talk them thru the repairs.

Yeah, I’d just pass that on to someone looking to develop their skill as a luthier.
That’d be highest and best purpose for that particular guitar.
IMO.