Ok older (50+) people, be self aware : have you started thinking out loud/thinking everyone needs your input ?

Mike Eskimo said:
Much in the way of the Progressive “Are you turning into your parents ?” commercials…

Worse case scenario (truly) one that (thankfully) my brain did control : saw a primarily blues guitarist (we all know the dude) perform at a club (he was great) . Afterwards he was hanging out chatting up people and I almost blurted out -

Just before I left the states I was helping a friend move some stuff to Goodwill. He was obese but his issue was genetics. He just couldn’t lose weight.

Someone made a comment like that to him and his reply was, “And your too young to be in the hospital” and he proceeded to pound the punk into the ground

I don't really talk to random people giving unwanted advice; I just kind of mutter to myself~

Timbresmith1 said:
I tell those joiks “I’m not from here.”

I’ve lived here for 20 years, but I wasn’t born here. I borrowed it from a lady that wasn’t from here. I saw the salesman’s reaction and walked up to the woman that said it and told her I was gonna borrow that phrase. She about died laughing and said she was gonna start using it when she got back home

Next time a salesperson hits me up, whatamigonnasay? I ain't from around here, that's what.

There’s this one cloud that really thinks it’s the bees knees. It thinks I don’t notice it, as it nonchalantly drifts by…., no, I see it alright. It’ll puff up all fluffy like it’s putting one over on me, nah, I got your number puffy white cloud! I SAID I GOT YOUR NUMBER! I KNOW YOU CAN HEAR ME!!!

stxrus said:
Just before I left the states I was helping a friend move some stuff to Goodwill. He was obese but his issue was genetics. He just couldn’t lose weight.

Someone made a comment like that to him and his reply was, “And your too young to be in the hospital” and he proceeded to pound the punk into the ground

Be careful what you say as the consequences can be not what you want
Click to expand...

I learned the hard way some of those big fat guys are tough as nails. I hit a guy in the stomach one time, I swear my fist went in his gut clear up to my elbow, I don't think he even felt it. He hit me in the gut, and I was hoping my backbone didn't fly out my rear end! It didn't get a whole lot better from there. ONE of us learned a lesson that day.

One thing about being REALLY old, you ain't got a whole lot to lose! I figure I can get away with saying most anything I want to MOST of the time! I try not to take advantage of that in a malicious way, but like I said, I ain't got much to lose.

I don't usually blurt out opinions unless someone does that to me. Then I can't help myself.
I was once stood in a designated smoking area at work, outside, when a 'large lady' walked past and just said, "Smoking is bad for you". I said, "I know, but then chips and buns are bad for you but your not holding back". Oh she didn't like that but we had both made true comments and her complaint went no where.
People should keep their comments to themselves.

I find it ironic that if you're 20-something with facial piercings, tats, and green hair, you can scream vulgarities and shake your fist and wave a placard around and end up on the six o'clock news. But if you're 60-something with a lifetime of wisdom that comes with raising a good family at your command, you can sit in your comfy chair and scream at the six o'clock news. Just sayin' ...

I am more inclined to believe that young people don't understand that there's things they need to hear.

Toto'sDad said:
The rigors of your (sort of recent) diet change, bicycling, and generally getting fit are starting to manifest themselves in your way of thinking. I'm almost certain that in the not-too-distant future you will announce that you are now a Vegan! (You will make this announcement because as soon as you become a Vegan, you have to start announcing it to everyone in earshot.) Then you will be posting at least twelve times a day that everyone else should become a Vegan. You can't fight it, just go with it!
Click to expand...

Ok older (50+) people, be self aware : have you started thinking out loud/thinking everyone needs your input ?​

1. Private scenario: If anything, I am now quite happy realizing nobody is interested in my opinions unless they ask me directly.

2. Professional scenario: I am a professional making my living on having qualified opinions on stuff regarding people issues, so I guess that is why I am so gratefully happy in scenario no 1.

Old Deaf Roadie said:
I am more inclined to believe that young people don't understand that there's things they need to hear.
Click to expand...

That need doesn't apply only, or even primarily, to young people.

When you blurt out something on stage, into the mic. To a full house. Then you're like, holy crap where did that come from? In all honesty, it was kind of odd for me when I was younger, because I've always been shy and therefore painfully polite, but was also very much an intellectual idealist. Then I met my wife in my early twenties, who was also an intellectual idealist, but had no problem telling anyone else exactly what she thought. So in hanging around with her, I would sometimes have the courage to speak my mind.

Now, as I approach my mid-50's, I'm still shy and overall mostly still painfully polite when greeting or interacting with people (of any age) out in the world. I'm no longer an intellectual idealist though, as people and consequences have just kind of worn me down. I also really just want to be as happy/grateful/lighthearted as possible, because I spent years of my youth as an angry young man, primarily angry at my father for being a neglectful alcoholic. It also kind of spilled over towards both male authority figures and friends/acquaintances who were alcoholics. I just wasted too many years being angry, and life is much better being happy, and looking for beauty where it exists, and just being grateful for all the good things that have come my way.

Really the big change with me now is all the annoying dumb stuff that people of any age might do, and I don't feel so much the desire to hold my tongue, but I don't say anything because I know nothing good will come of it. Case in point - I do a lot of contract work, and have to reiterate issues over and over again with people I interact on the contracts with, and they never seem to hear me. When I was younger and something like that happened, I might have been briefly irked, but that was about it, because the other party usually had to take the blame for not listening to me. But now that I'm older, it's at least partially shifted the accountability onto me, being in a position of 'default seniority' (my contract position title almost always includes the word 'senior' in it). If I could actually make these decisions on my own, it would probably be fine, but my hands are tied (the 'senior' word only describes my experience level). Possibly the saddest part of it all is that it's kind of got me anxious to retire, so I don't have to deal with it any more. And that's not really any way to live, IMO.

Bob Womack said:
I've got a career where longevity favors the silent and tactful.

This. I know lots and lots of stuff about all sorts of topics but I won't share any of it in conversation unless you ask politely and have granted me permission to share. It's my experience that about 90 percent of folks are unable to learn from others telling them things. The other ten percent actively seek out wise advisors.

OmegaWoods said:
This. I know lots and lots of stuff about all sorts of topics but I won't share any of it in conversation unless you ask politely and have granted me permission to share. It's my experience that about 90 percent of folks are unable to learn from others telling them things. The other ten percent actively seek out wise advisors.

A closed mouth gathers no foot.
Click to expand...

I see that you and I are about the same age, and I very much agree with what you said.

Actually, in all honesty, even if I was asked politely and given permission to share, I'd still decline in some instances. The reason for that is because I can't properly get my thoughts out before the average asker's attention span has been exceeded. And no, I'm not just talking about younger people, either!

Having said that, I can sometimes tell when someone who's asking is within that 10%, and it's almost always a wonderful thing what they do with what I tell them. That minority is what keeps me 'paying it forward', albeit more and more cautiously. 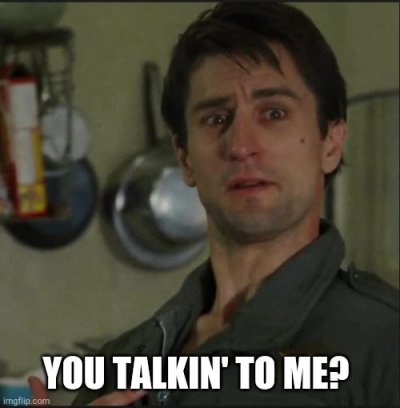