Squier Paranormal Cabronita Thinline Telecaster, to give it's full, rather lengthy name. I've been after something Tele shaped that was fairly lightweight and these get good reviews.

Arrived early today from Andertons and pretty much playable out of the box. All I've had to do is drop the string height and give the truss rod a tweak.

So far I'm pretty impressed, and i am a v picky online shopper. Lovely colour and the finish is flawless. The pale neck, which kinda suits the blue body, is probably about the same size as a bullet one. So it's slim but not outrageously so, with no sharp fret ends or raised frets. In fact the frets are actually well finished.

I don't know much about jazzmaster pickups but these sound like slightly trebly p90s, with reasonable definition and bags of sustain. I know the pots are cheapies but they're not scratchy and the tone control has a decent sweep. The guitar can't weigh more than 6lb, which my back is going to appreciate.

The only cons i can see so far are the tuners, which work ok but don't feel like they will indefinitely. Also the bridge is slightly jangly when strummed hard, but my original MIM Cabs have a similar setup and do the same. 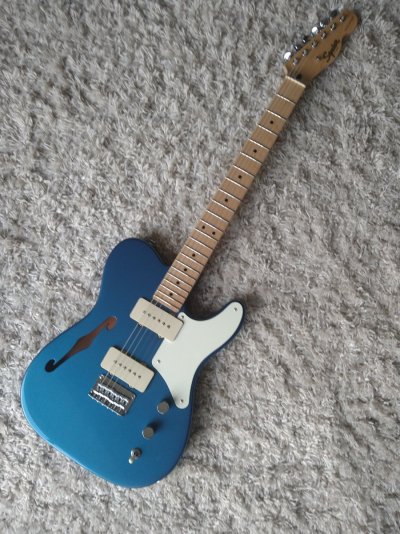 Love the P90 in my PineTele Cab

Location
Over the hill and far awa

I may need to look into these.

Very nice! I recently acquired my second Squier, a Classic Vibe 70's Jaguar. This and the other one, a Tornado, are of incredible quality for the money. Love them.

Mechanic said:
I may need to look into these.
Click to expand...

Yep, they sure are nice. By the way, is that a Don Martin cartoon face in your avatar?

I have one of these models in white. Love it! I did swap the neck for a lovely roadworn 59s neck but everything else is stock.
I think your description of the pickups is right. Trebly JM shaped P90s are sweet.

Very intrigued by these. My hope is that the pickups sound... different. You know, not the usual tele sound. Do they sound like P90s?

FatRosie said:
Very intrigued by these. My hope is that the pickups sound... different. You know, not the usual tele sound. Do they sound like P90s?
Click to expand...

My only other p90 guitar is a LPJ style for comparison. The Cab pickups are not quite as dark but def don't sound like normal single coils. Cleans are nice and not muddy and with a bit of gain they're loud and fun, like p90s, which is what i wanted. There's also a good difference between neck and bridge positions, which makes them v useable.
For a semi hollow guitar it's not bad for hum or feedback either.
It's one of my few online buys where I really feel no regrets and that i got something satisfyingly good.
You must log in or register to reply here.

NGD - Partscaster, Swamp Ash with Roasted Maple Neck - and it's all mine
2