NGD - something a li'l different

I have been selling stuff and replacing with other stuff recently. few guitars have gone, couple of amps, loads of pedals

i have spent months aching over P90 equipped goldtops, US Jazzmasters. i put a bid on a Gretsch Jet last week, but the counter was over my budget. lost out on a Greco goldtop deluxe - could have been a great project platform to make a 56-alike goldtop

then a thing happened. a light went off in my head

y'know them Fano/ Novo guitars? sometimes i look and go "PHWOAR!!!". other times i think someone left their guitar in a hot car and it melted. in a bad way

and that headstock?? no. no way. just can't have it

now, they are interesting. and the headstocks don't make me throw up in my own mouth

P90s?
Bigsby-esque trem?
unique design?
different from anything else i have?

so here it is

yes, a new one would have had gold plastics instead of bright white, but hell it looks great

trem... works. its a duesenburg, so more worble than divebomb. i mean, i am not a shredder. so this seems fine

the pickups are spanking. just played a load of riffs , and its taking everything i can throw at it

and its really comfortable. well balanced, your arm sits nice over the german carve

i have a Maybach Lester on loan with a mate who is considering buying it. if he does, i might reinvest that into another Rivolta. i am very pleased

images are low quality and blurry, but that's life

+note - its not black; its black with a sparkle top coat. which is just lovely+ 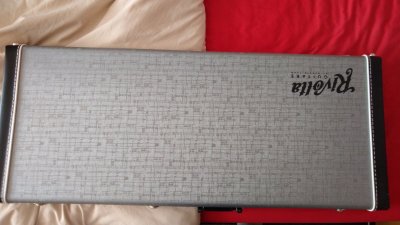 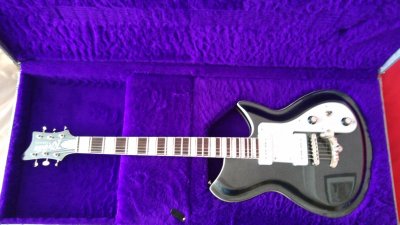 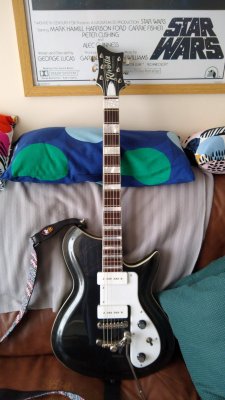 Wow, fancy, and not riviolting in the slightest.

Rock that in a heartbeat. Classy tuxedo look. Nicely done, I want a red one

For me, a Les Trem is far superior to a Bigsby.

Way cool. Rock that thing to an inch of its life!

i have had a quick chat with Rivolta - they do the plastic fittings as a retrofit, so am getting the gold/ plexi scratch plate, nickle pickup covers and a black trussrod cover shipped. as it has to cross the atlantic, i expect it to take a while...

still a great guitar - the low E will pop out of the bridge saddle if i play hard, but otherwise its magic

so. i contacted Rivolta and a really nice man called Wes quoted me on the replacement parts and shipped to me. as i am in the UK, i had to collect from a post office and pay import duties / tax. and i (as usual) took twice as long wiring up the new board with CTS pots, paper in oil 0.015 Russian NOS Cap, pushback wire, etc. i am incompetent, but i get there...

it now looks thusly, and that makes me even happier nice Rivolta! I've been thinking myself of getting one. how do you like the Les Trem?

Always liked the shape of these guitars with the outer carve and love the Lestrem. I have one guitar with the LesTrem and will have a second soon.
Did you notice a difference in the pickups after adding the Nickle pickup covers?

one thing though is that the headstock and tuner positioning means the strings splay out dramatically between the nut and the tuners. so tuning can be a challenge

and, if you play hard, you can pop the low E out of its bridge saddle

but, y'know, 1st world problems? i'm assuming my one is metric as this was built in Korea. pretty sure you can get them with imperial studs as well

not massively tbh; they are nickle coated plastic, not solid metal. that said, i did an entire new loom with CTS pots, PIO russia cap, etc. so its slightly better sounding from that perspective

i needed to ream out the pot holes on the plate, the CTS pot shafts are thicker than what Rivolta use

if either of you are considering getting one, i'll say this. so am i. they are releasing a 12 string model, and i'd love to get the fixed bridge model in blue. it is a great, great guitar

Very cool.
You must log in or register to reply here.