After my perfect oh-for-four last weekend, I'm back!

We have SF "at" LA Rams, and Cincy at the Chiefs. ("at" because it likely will be SF's home game haha)

I am not going to make my picks yet, but if getbent and others are interested, The Athletic has a good article on why SF has a very good chance to 'upset' LA (SF has won 6 straight against the Rams). If you don't have a subscription but haven't opened any/many articles at The Athletic, hopefully you'll be able to read it: 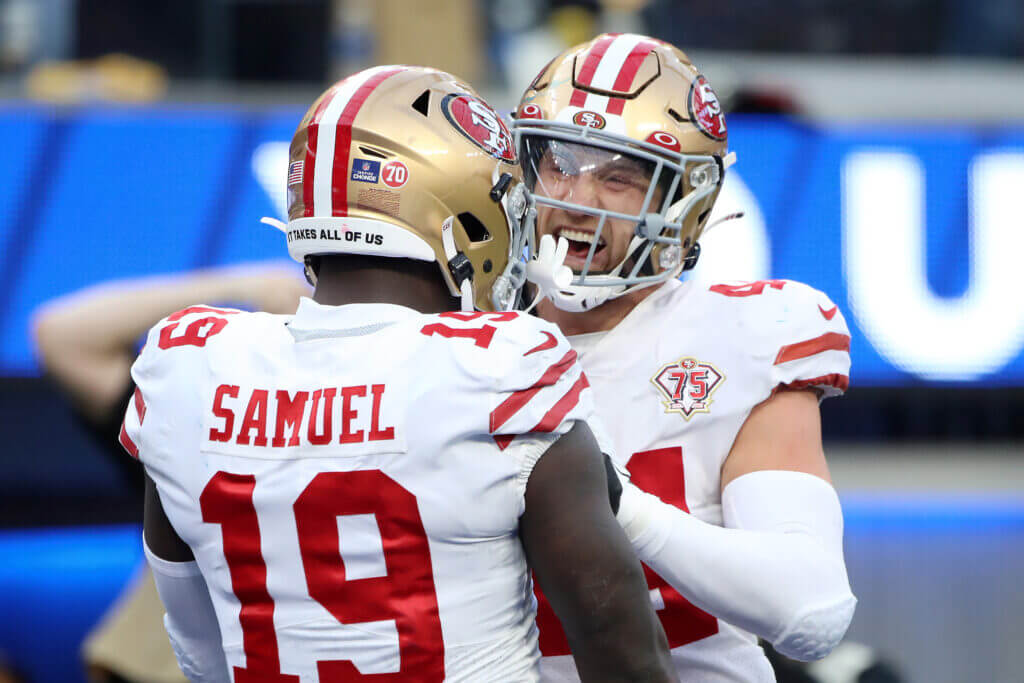 Kawakami: All the reasons the 49ers have a great shot to beat the Rams a

The 49ers will feel at home at SoFi Stadium on Sunday. They also have closed out games beautifully. This is their path to the NFC title.

I will say this, of the four teams involved, I'd be most surprised to see Cincinnati emerge as a winner. Of course, that's not going out on a limb considering who they're going up against. But I felt that way about the 49ers last week; I could not see them winning at Green Bay. And especially without scoring an offensive TD. One thing's for certain, the future looks good for the Bengals right now, but they do need to address that offensive line, or Burrow's career will be cut short, which would be a travesty. (as an aside, how do you give up 9 sacks--on the road--and win??)

What are your thoughts and predictions??

I do hope the rams win. Mostly since the lions were always my No2

It's weird, I'm strangely okay with any combination of winners for the super bowl. It'd be kind of cool to see Cincy get there, but I think they're a year or so away. I am sort of tired of KC, but they are fun to watch and I like Mahommes.

I'm a big 49er fan. Like you, I was surprised that they pulled out the win in GB. I don't have high hopes for this weekend though. I am hoping for SF vs Cincy in the big game.

I'll take
Rams over 49ers
Chiefs over Cincy.
Rams and Chiefs would be a great Superbowl!

Anything can happen though in the playoffs. Every once in a while the Rams just collapse on themselves. But then, so does most every team I guess... and Garrapolo can have an off day for sure.

I ain't scared!! Here are my picks.

Cincy @ KC ( KC is favored by 7)
After last week I think anyone that bets against the Chiefs is crazy, especially at Arrowhead. I know that Joe Burrow is on fire, but so was Josh Allen. The crowd noise is going to be a factor in this game for Cincy just as it was for Buffalo but even worse.
The Chiefs appear to be back to full strength and look to be the hottest team right now even with what Cincy has done so far. I also think the Bengals are a year away from being really, really good and if I was a Ravens, Steelers or Browns fan I would be a little scared for the future. I know many are anointing the Cincy D the mantle of the best defense with their sack party last week, but Mahomes is no Tannestandstill, he will shred their pass rush if they rush out of their lanes with his legs.
Chiefs reach full potential this weekend, the Honey Badger fools Burrow and grabs a pick to help the Chiefs cause. Mahomes does what Mahomes does and throws for 300 with 3 TDs with Kelce grabbing two TDs and the Cheetah grabbing a TD himself.
Burrows throws a trio of TD's but also throws a pick losing a close game 35-21.

49ers @ Rams (Rams are favored by 3.5)
The 9ers have taken the last SIX games against their SoCal rivals, so what does that mean for Sunday? Nothing, Nada, Zilch. This game is going to be won in the trenches and I think the Rams front will narrowly beat the 49ers front. It seems like every time the Rams need a play on D, Donald, or Miller or Ramsey makes a play and kills the other teams momentum.
I think this is going to be slugfest with each team teeing off on each other but the Rams have more horses than the 9ers and I think toughness wins this game. I went back and forth on this game with who to pick in this game and I finally made the decision based on this clip.

I think Matt Stafford comes out and plays with toughness and his team rallies around him and they pull this one out. This is going to be a tight game and I think the Rams come out on top 24-21 kicking a late field goal to go ahead. The Niners get the ball back with a chance to tie or win the game and Garapollo fails to get it done and turns it over on downs to end the game. Give me the Rams for the win 20-17.

And please be kind when you bash my horrible picks on Monday!! LOL

Colo Springs E said:
What are your thoughts and predictions??
Click to expand...

KC & Rams go to the SB
Jimmy G goes back to New England in a trade.

Rams by 2 over Niners. I actually like the Niners and Jimmy G takes a lot of BS because he's playing the game exactly as Kyle Shanahan tells him to. But bottom line is Niners are a ton better when he is on the field than when he is not. But Rams have a dual threat on the edge and Stafford throws a rope. Rams but not by a lot.

KC over Cincinnati by 12. Cincy doesn't have the speed to cover Hill and their secondary is not suited to keep the ball away from Travis Kelce. And Mahomes is smarter at on-field game management, he extends plays. Joe Burrow is good but he can only extend plays by running and it won't take more than the first quarter for the Chiefs linebackers to keep Burrow on the turf. Plus, Andy Reid is a much better coach and the play calling will settle this one by the 3rd quarter. Don't be crabby, the Bengals are the real deal and they will be back next year. (as long as their ownership pays up in free agency)

I'm thinking Rams over 49ers. I don't see the 49ers O-line holding up against the Rams front. Although this one will be interesting with both teams showing the ability to make mistakes recently.

KC will beat the Bengals. Joe will make it a show for a while but his line can't protect against these guys.

Out of principle, I will not change my pick... but based on a show I listened to last night, watch for SF to get more holding calls and more pass interference calls called against them than the Rams. Could make a difference. I hope these games are not penalty heavy, I hate that.

Rams and the Chiefs are going to the Super Bowl, the Chiefs will win. Sports commentators will line up to kiss Mahomes's rear end, FOR MILES! Mahomes will sign advertising contracts with everyone from Apple, to Depends.

If you guys want something to watch before the games, the 24 Hours of Daytona is in its last few hours. Good, close racing in all classes. It’s on USA right now, will switch over to NBC soon.

KC by 12. Bengals are legit and will be back but you’re not beating the best QB, TE, WR, Safety and best coach in the league at home. The Chiefs are going to win by close to 2 TD margin.

Rams by 2. I’m on the fence because the Niners do what they need to win for 60 minutes. So this one may come down to late big plays and may be low score.

I predict the Falcons extend Ryan through 2024 this winter and draft his successor in 2025 and will make a playoff run in 2026. I also predict the next 3 losing seasons in ATL won’t be Matty’s fault “or whatever “.

Rams over Niners.
Chiefs over Bengals.

But I'm happy with any of these teams going to the SB. It's nice to have a change!
I think any of them could pull it off. Not sure Bengals have enough history in their current configuration to exclude them having an off day.
The Rams SHOULD win, but a couple bad breaks or turnovers and the Niners, who are playing with emotion, could pull it off.
However, even if the Rams have a bad offensive day, their Defense can save a game.

Really , I guess, We've seen all of them collapse occasionally....
I just hope the terrible OT rules dont pick a winner by not giving the other team a chance to score!

Rams had two huge melt-downs in their last three games. Important games. They only won one due to the Bucs dysfunctional secondary (please, someone hire Todd Bowles away from the Bucs). I'm expecting a close game that will go down to the end. 49'ers have won last 6 meetings with the Rams, but that can't go on forever. If Jimmy G is not horrible, I think the 49'ers eek one out.

KC over Cincinnati. This will not be close.

I’m not going to open my pie hole and make any predictions.

I love the playoffs, even if the Eagles aren’t in there. Football at its finest!

I just want to kick back and enjoy. May the best teams win!

I have said it before. My only prediction is that the refs will win one of the three remaining games.

Stringbanger said:
I’m not going to open my pie hole and make any predictions.

I love the playoffs, even if the Eagles aren’t in there. Football at its finest!

I just want to kick back and enjoy. May the best teams win!
Click to expand...

Many times, the final playoff games are much better games than the actual SB game.

I read that this officiating crew doesn't call many penalties, but this is a bit much. They're letting the Chiefs get away with repeated obvious holding and pass interference penalties.
You must log in or register to reply here.
Share:
Reddit Pinterest Tumblr WhatsApp Email Share Link