i recently completed a new scratch build i call my Vox Thing. im up to V12, but it feels more like V112... constant tweaking. and now, most of my tweaks get set back because its not "helping", it just sounds "different". so thats the test, isnt it?
heres whats in here: 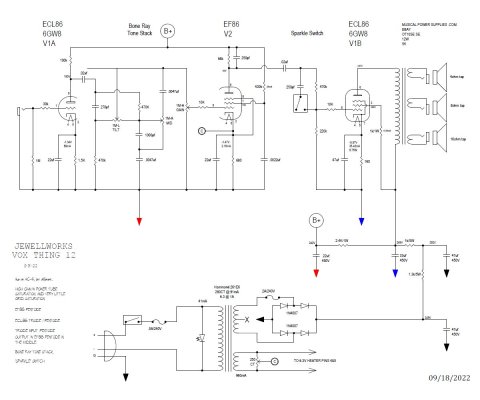 my last tweak is this: the Max Grid Current listed on the data sheet for the Pentode of the ECL86 is 35mA. im slightly over that. i know pushing the limits is what we do here, but this doesnt seem like a good idea, so im going to swap the 1.3k/5W dropping resistor at the 1st filter cap, with a 1k/5W. that should put my plate a little higher, around 265V, and w/an adjustment to the cathode resistor, set it at around 32mA.
that should do this: 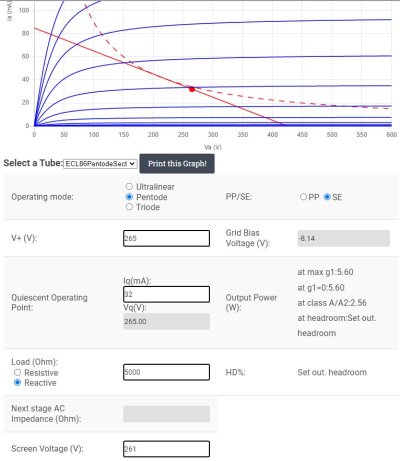 i can get SO many useful tones out of this lil Vox Thing. it took some serious experimenting w/the EQ, but it all came down to 1 simple tweak from the original Bone Ray circuit, and it sounds amazing to my ears. ill get a video/audio clip together soon, as well as decent pictures of the chassis.


BUT, all this got me to thinking about the same amp, but "reversed".

this V12 one has the Triode of the ECL86 as the 1st preamp stage. then its the Bone Ray tone stack, then Gain control into the EF86 Pentode, to the ECL86 Power Pentode.
how about reversing that, like most EF86 amps are? EF86 Pentode, Gain control, ECL86 Triode, Bone Ray tone stack, ECL86 Power Pentode.
i whipped up a quick dwg... 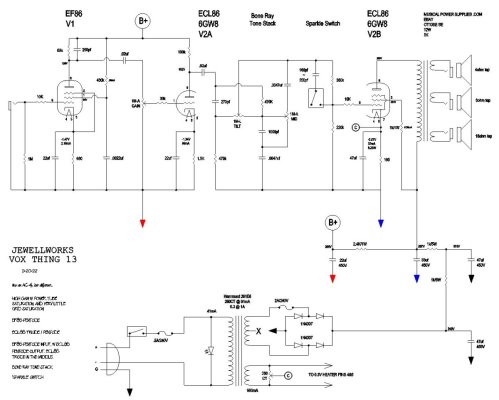 seems to me the EF86 would overdrive the grid of the Triode by quite a bit, and the Triode is there to mostly operate the tone stack. i also think the tone stack itself would be overdriven. is that good? or bad? anyone w thoughts and/or experience?

right now, this is all very theoretical. just wondering how it would sound compared to how this amp sounds, and worth pursuing.

I like both designs but either topology has the potential for too much gain. The ECL86 doesn't need a lot of swing to fully drive it. It's really a great 1-tube amplifier. By throwing in the EF86, you force yourself to engineer out all that extra preamp oomph.

Your 2nd component arrangement is more traditional for a small "Vox-ish" amp with the pentode up front. Of course, part of that Vox sound is a super-gainy EF86 set-up with a screen voltage down in the gutter. You need to keep that EF86 stage gainy, and then perhaps use a 250K pot instead of the 1Meg and possibly add even more attenuation to dump some of that signal going into your triode stage. Even then, between the triode and pentode, you'll likely need another volume control. It's going to be more versatile with a master volume. At that point, you have a pretty complex amp that maybe puts out 2 watts. It may be a tone machine, though.
You must log in or register to reply here.
Share:
Reddit Pinterest Tumblr WhatsApp Email Share Link