How’s it going? I’m Dennis from Florida, new to the forum and a new Telecaster owner. A couple of months ago I bought a 2020 American Performer Telecaster, used off Reverb, for a great price (Less than a MIM).

The pickguard had been changed to a wood one, but otherwise stock and in great condition. I’ve really been enjoying the Tele, it has a neck like my Strat, not a baseball bat like some I tried before, and the Bridge pickup screams!

I’m probably going to pull out the vintage slotted tuners and install Fender locking ones - several strings keep going flat - I figure slippage. Maybe I just need to learn the trick to them, but I have locking tuners on all my electrics, even my Traveller EG-2. 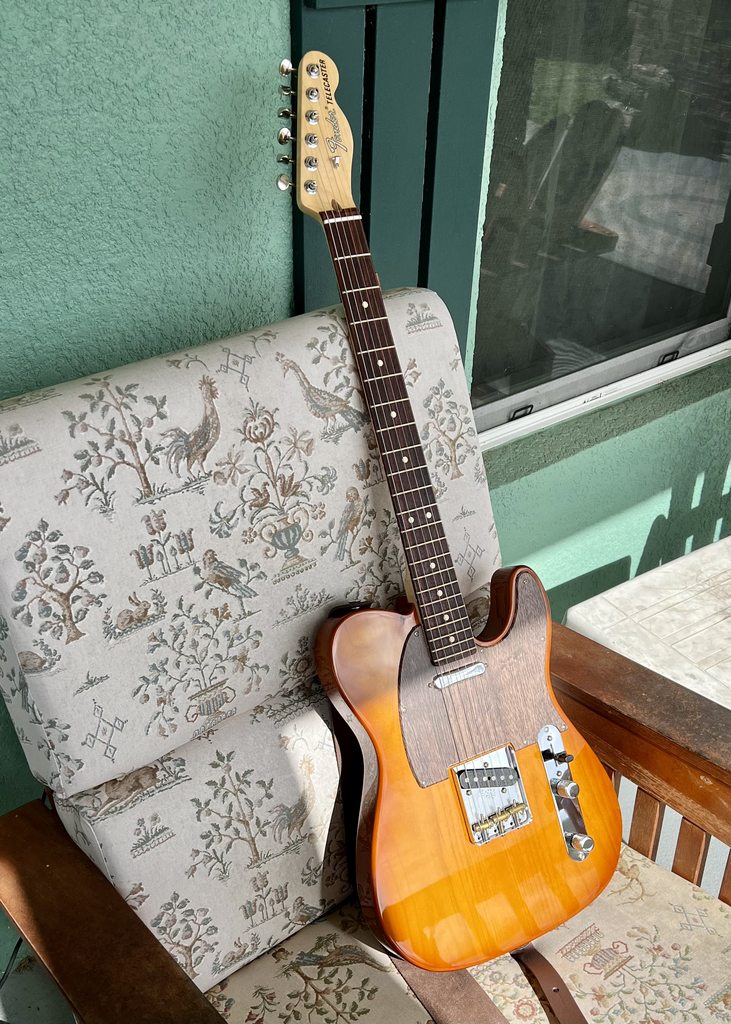 It has a lot of friends - I own 9 guitars, 2 tube amps and a Kemper Profiler Stage.

I was a hard rock/early metal player and a Strat guy/Charvel guy in the 80s. My 1985 MIJ HSS, pearl white faded yellow in the pic, and a 1989 Charvel, disassembled for a blue/green Frankenstein paint job, new hardware and electronics (not shown.). I also have a Squier Strat, a Traveller EG-2 travel guitar and an old Yamaha acoustic.

Now I play at Church and write/record my own progressive rock in my guitar room.

I have a Suhr Bella, a Fender amp and a Kemper. The Kemper is so good it gets 99% of the play time. This coming from a former tube amp evangelist.
Last edited: Dec 30, 2021

Welcome! Teles are the best but what else would you read here!

I don’t think the tuners are the issue. Probably the nut. Do you hear a *ping* when tuning up?

Welcome aboard! We will need to get you processed. I see you posted the requisite tele pix so I guess we’re down to the paperwork and retina scans…..

Welcome! Agree that vintage tuners can be a PITA until you get use to them. My problem with them was aways related to getting the G string to stay in the slot while winding. Had locking tuners in the past and didn't bond with them, however YMMV.

Welcome! That's a great looking finish/color, the wood guard goes well with it!

Welcome to the forum!

monkeybanana said:
Welcome! Teles are the best but what else would you read here!

I don’t think the tuners are the issue. Probably the nut. Do you hear a *ping* when tuning up?
Click to expand...

No ping so far. I trashed the strings that it arrived with, put some Ernie Ball 9s I had kicking around on it, they were too loose for my heavy left hand and the jumbo frets, I was fretting notes and chords sharp high on the neck. The D string was still requiring me to tune it back up about 1/2 step between songs.

I put Elixir 10s on it, that’s what I use on my PRS/Gibson scale guitars. Nice playing, better gauge for the guitar, but the D is still going 1/2 step flat between songs.

I’ve been playing for 40 years and setting up my own guitars for about half that, so The relief, intonation, string height, etc is abut as good as the barrel saddles will allow. I do need to file a few of them on the bottom - they’re poking me - ouch.

Welcome - very few of us have un-modified guitars (except for the "special" case queen we've all had at one point).
In addition to arguing about tuners & nut set-up details, expect some cheers and some boos for the Kemper (heck, I can't even run a drum machine).
And, thank you for bringing pics.
Peace - Deeve

Welcome from a fellow Florida resident!

Welcome DennyBob! Another Florida church player here. My tele gets 80% of the play time there.

Welcome. I have friends in Florida - do you know them?

Welcome aboard. You're gonna love your Tele. A very versatile guitar.

4pickupguy said:
Welcome aboard! We will need to get you processed. I see you posted the requisite tele pix so I guess we’re down to the paperwork and retina scans…..
Click to expand...

Wait. When did we stop the blood work?

The American performers are really nice. I think they’re a better value than whatever higher tier.

I would think it’s a nut issue. I’ve never had a problem with vintage tuners and wished my gibsons or guild had them. Locking tuners aren’t so much for stability but ease of string change.

Mechanical pencil graphite in nut slots has been helpful for me when it comes to any tuning issues.

Welcome from Albuquerque New Mexico that is a very nice Tele that you have in a Cherry burst or Sienna burst. I also exist in playing on the bridge pickup, British invasion stuff. I am on a fence concerning your pickguard, it is different than almost everyone elses, that I like. But the wood grain on it sort of takes away from the grain in the guitar body. Happy playing
You must log in or register to reply here.