Martin announced this at NAMM

I'm very interested, because I like the way Martins sound but have always had trouble playing the kind of stuff I play about the 12th fret.

That looks pretty cool. Made in Mexico with a laminate body, but those aren't deal breakers for me.

Nice. What's the new bracing? I must have missed that. I find the new neck joint interesting, although a) I don't need access that high up the neck, and 2) they lost me at "slim neck."

EDIT: found a link I missed that has bracing info

If I didn’t have a Gallagher Doc Watson (non cutaway) on the way...

Looks likes a bolt-on neck. Is it?

Btw, both those videos have out of tune guitars.

Would like to try one. Design looks really cool, but ears tell the story...

As one review said "an acoustic guitar for electric guitar players"... $1899 list, long scale but thirteen frets clear.....somehow I doubt that it will be a classic

Not for me as I learned how to play on a D-28 import clone 45 years ago and love the acoustic ( play 50/50 electric or acoustic gigs)
But it could be a ' bridge the gap' guitar that has good tone, features that get electric players to play, then with time dig a more traditional acoustic? 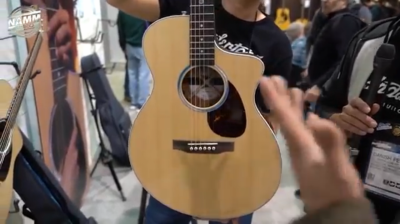 Here’s a picture for those who don’t care to watch the vid...

My personal opinion is that it looks innovative, very comfortable to play, and kind of ugly. Like they wanted to make an offset shape but were too nervous to go “all out crazy”, so they came up with something that looks like a Breedlove that sat out in the sun too long.

Guess I'm a traditionalist, that just isn’t my Martin.
P

I find it really interesting and I'm a bit surprised to see something this out there come from Martin. Would definitely like to hear one in person. I'm wondering how good they could make this 'platform' sound am a little surprised they don't have a high priced USA version that's a bit of a showcase.

It looks like the neck is bolt-on and adjustable, so you can change the action with an allen wrench. You can make more substantial changes with shims, as in Taylor's neck joint. That's appealing. Rick Turner is always arguing that all acoustics should have adjustable necks.

I do a lot of fingerstyle jazz stuff and have to reach above the 12th fret. Even where there's a cutaway, that's often awkward on an acoustic.

I'm not crazy about the sounds in the videos--I don't like the Taylor sound at all--but I'll be interested in trying one. Sweetwater has them listed at 1499.

Edit: Turner's argument is based on his experience with Howe-Orme guitars, a 19th century maker that made guitars with necks that were fully adjustable. They sat off the body a bit. interesting. Anyway Turner claims it had no bad effects on sound but made a huge improvement in playability, because you could easily tweak the action as the weather changed
Last edited: Jan 20, 2020

Freeman Keller said:
As one review said "an acoustic guitar for electric guitar players"... $1899 list, long scale but thirteen frets clear.....somehow I doubt that it will be a classic
Click to expand...

Wow! Somehow, a laminate body, x-bracing (visible thru soundhole) and bolt-on neck don't square with up the price tag, IMHO.

Good luck to them, but a good acoustic is such a fine balance. All the crazy prejudices people have for guitars come true on an acoustic - bridge mass, tonewood, etc

Love proper Martins. Hope this is one, but 50% of everything I try with their name on it now does not say Martin to me

Anyone strap one on yet? Wondering how these things balance?

Martin is evolving with the times. Like many say, it's not for me but I'd rather they appeal to the younger market and stay in business. I feel confident their authentic line and traditional models will always be there too.

Just so they don’t quit offering the traditional favorite

That's a lot of shekels for an MIM guitar.

I was hoping to try one of these just out of curiosity but Sweeter still has them as pre-order. The production must have been delayed by "it that must not be named."

I have listened to a lot of the available videos and I'd say I don't like the acoustic sound much at all. It always seems to sound thin and too bright .

Has anybody tried one of these?

Probably good functionally speaking..... but not digging that cutaway.
You must log in or register to reply here.

Guitar Necks. How Important to You? To Me ..... The Most Important Part of an Electric Guitar.
2 3