So in March Musicians Friend had a sale on Limited Edition Player Strats and Teles. I thought about it for approximately two weeks and ordered a Blueburst Strat and a case for it also. When I saw the case had been shipped but not the guitar, I knew there was going to be a problem.
The case arrived in great shape. The guitar showed up later. It was in a Coffin Case box, with a thin wrap of bubble wrap as the only protection. Luckily no shipping damage. However as I unwrapped the guitar it was filthy, greasy prints, scratches in the finish and black filled scratches on the fingerboard.
I've had a very bad year of medical problems and had to go back in the hospital before I could deal with M/F. I finally was able to do a chat with a customer service rep, not very good English or comprehension of the complaint and why I wanted a new guitar as I had ordered rather than the demo or used guitar I received. Once she figured out what I was talking about she said they would send a new guitar, but I had to pay for it first. I finally agreed with all their terms so I could receive my new guitar.
Finally arrived Tuesday in a rather poor outer box, the guitar however was in the original unopened Fender box. A very nice Strat was inside and in perfect shape other than some fret sprout. Nice guitar, I'll keep it. Photos are the replacement Strat. 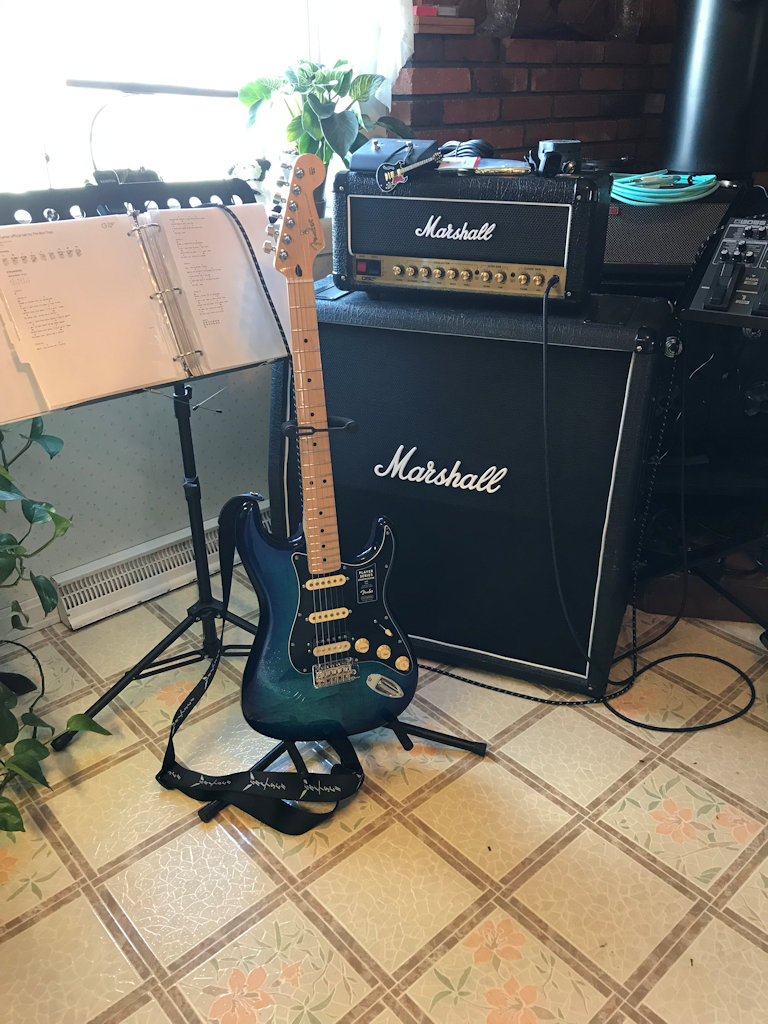 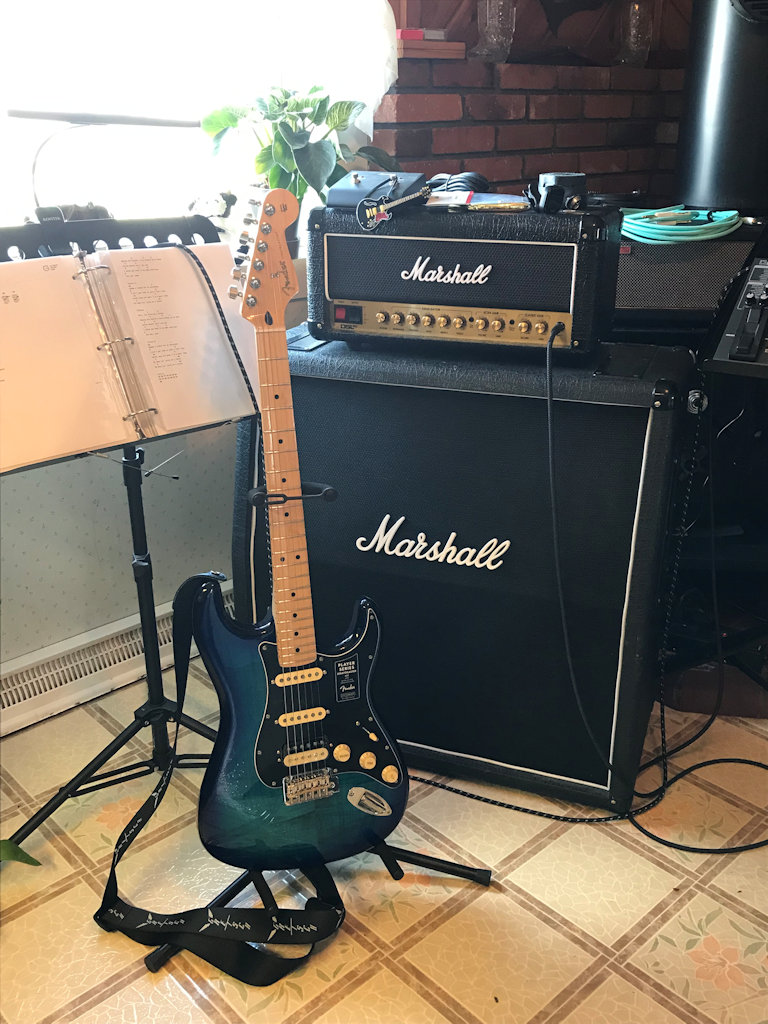 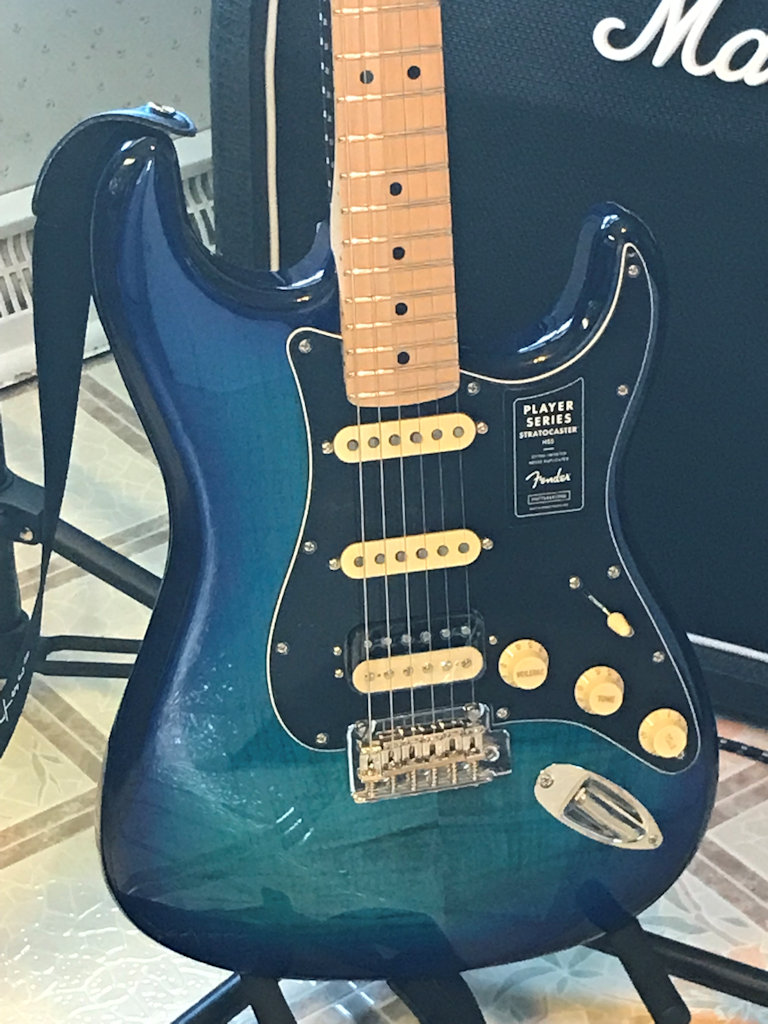 Just reflections on the body, poor lighting and camera work on my part.
Need to add strap locks, fix the fret sprout and change the strings.
This is currently my practice guitar, while I'm waiting on the Gretsch G6120TGDS guitars to make a landing in America.

I’ve been a loyal Sweetwater customer for years. I’ll go to the box store, demo there, then order. Their customer service is superior.
Nice guitar, glad you got things rectified

Congratulations on finally getting the guitar you wanted. It's a shame when players have to go through that kind of stuff to get satisfaction. I love the blue finish. It's certainly not a vintage look but it is an excellent color for the present day. What's the head on the 4 X 12" Marshall cab?

I worked at a music store for a couple of years in the early '70s and the shopping experience was totally different from what it is today. Guitars were kept behind the counters and a salesman always stayed with a potential buyer while they tried out different instruments. They were instructed on how to hold and play the instrument so no scratches would occur. If they didn't buy the instrument the next potential buyer would be thankful for the instruments pristine shape. I was required to wear a suit, tie and nice black shoes just to be on the sales floor. They allowed my very long hair because they thought it would appeal to many of the customers and they were right. I became asked for by quite a few customers.

There was a time starting around 2004 and continuing for many years that my wife and I virtually lived at Guitar Center and poured over Musician's Friend catalogs. We became great friends with Brian, (the guitar / amp section manager), as well as three of his sales people, and ended up purchasing multiple guitars and amps from the store. Then came Guitar Center's purchase by a hedge fund. The first six months after the buyout didn't show much in the look of the store or the product offered but it became obvious that something was wrong when watching and talking to the employees. Without going further into it I'll just say that our business at the store slowly fizzled over the following year and then came to a halt.

DSL20HR more than enough power for home use but I wanted a Marshall and 4x12 cab.

MF is affiliated with Guitar Center and some of the items they are marketing as new are actually floor demos. This happened to me with a pedal a year ago, I knew something was up when it shipped from a GC store in Arkansas. I bought a Epiphone Rivera earlier this year; it was sent in a sealed box but had fret sprout so badly it was pushing out the binding on the edge of the fingerboard. I returned it and bought one from Sweetwater. Never again, MF.

Glad it worked out, love the Strat

Buying sight unseen without the ability to handle the instrument is always a gamble
I buy from Sweetwater whenever I can to try and minimize the danger of getting a rotten apple.

I have had many great experiences with Sweetwater, but one about 10 years ago stands out.
I bought a new American Standard Tele, Ash with a natural finish and a Rosewood Fretboard.
Beautiful guitar, but on closer inspection I noticed a blemish that seemed to be in the layers of clear.

I called Sweetwater expecting to get an RMA to send the guitar back and then order another and wait. Instead, they told me to look on the website and pick another one and they would overnight it. They said to just send one of them back via the RMA. They have gotten the vast majority of my business since. The only time I buy anywhere else is if they don't have it, which isn't very often. 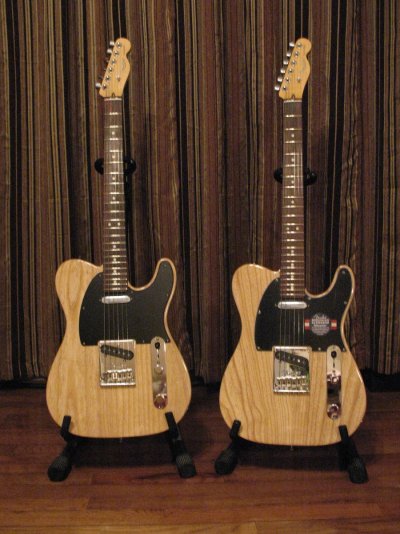 I have also had pretty good customer service from Guitar Center. Never had an issue with returns.
I usually go directly to a store for returns.

Seems to be a recurring theme with MF/GC. Not sure why anyone shops there anymore for guitars and amps. Glad it worked out without too much hassle.

Congrats on a cool Strat!

Nice Strat, although shame you had to jump through flaming hoops to get there. Congratulations.

I always buy in person, I guess I'm old school ... or untrusting of a guy on the other end of the phone that I don't know
You must log in or register to reply here.

The one that tried to get away..