Jasonpatrick said:
My vibrasonic had the same tweed style sleeves, missing all of them, tone was horrible!
Click to expand... Way back in the early 90s I bought a 6G7-A Bandmaster from a fellow who worked at Sam Ash. He found the head in a garage sale. He couldnt find a matching cabonet, so had the chassis installed in a beautiful custom made 3x10 cabinet covered in blonde tolex with a maroon grill. The amp itself needed a ton of work to get right but by the time it was done it was stellar. (The chassis itself was an oddball, it had the bias circuit of a Pro with the single capacitor, rather than the old dual 8uf.) I ended up leaving the vibrato channel stock but I converted the normal channelt to 5G7 spec. It wasn't a perfect conversion because the output stage is slightly diffrerent (presence circuit as I recall).With a buck transformer set to 110vac I was able to get the plate voltage into the 450vdc range. I hated to let it go but I had too many amps laying around, Buyer gigs it and loves it. Surprised more of these aren't convered this way.

I am beyond jealous. That's so cool.
Band Master Combos with 3 10's are
The Ship.
The Vibro-King was a moderno version
but You'd need Lou Ferrigno as a Roadie.
The 5E7's were pretty easy on the spine.

Your Brown Tolex version is only the 3rd
One I've ever seen. Nice Find!!!
C

I was on the hunt for one of these amps for a while back in the 90s and came up with one out on San Fran - they wanted 2500 which was a ton at the time. Looking back it was one of the best investments I ever made. They are wonderful just hard to find.

The 5 or 6 early brown circuits are all pretty similar and it’s true that the super duper early ones (some with prototype metal control knobs) sounded bad because folks at the factory weren’t used to the new design and you find wrong value parts in them.

There are articles on these cool amps in tone quest report and ch 13 of Tom
Wheelers Soul of Tone book on fender amps. I think much of the info contained there can be found on the 5G8 brown twin website which I believe is still up and running.

Your description of being able to apply tremolo to just the highs or just the lows via setting and blending of the two channels sounds like a very fun feature to explore.

Beautiful amp, congrats! And thank you for the detailed description for those of us unlikely to run across that model. Great read.

GuitarTalk said:
I had to jump on this one… I have never been this excited by a single piece of gear before.

The model: Before I begin, if anyone else has experience / information with this particular amp circuit, please do share! There is an article in Vintage Guitar magazine on this 5G7 circuit but there are some mistakes/typo’s in it from 2017 [1960 Bandmaster 5G7 (VG Magazine, 2017 Issue)]. Below is my personal summary on this unicorn of an amp…

For only couple of months in early 1960, Fender created this Bandmaster as a replacement for the 5E7 tweed Bandmaster… switching to the front panel, brown tolex version for the first time.

The date code “JC” on the tube chart, means it was produced in March 1960 (given its specs, it must have been very early in that month, I’ll get into this later). My blonde ash strat pictured below with the amp is coincidentally also dated March 1960 on the body! This is probably the “desert island” guitar & amp combo for me.

It has a 5G7 circuit (see photos and tube chart below). Only a hand full of these amps were produced, a good chunk were returned as the amps more powerful ~45 watts of output was too much for the original 3x Jensen P10R speakers to handle when cranked. As you can see, this circuit has the volume knob AFTER the bass and treble controls; this leads to the amp being referred to as “centre-volume”. My amp still has the 100% original P10R’s (luckily in 60 years no one cranked this thing, which would have resulted in blown speakers), the grill cloth is identical to the Tweed version, there are no metal protective corners… towards the end of the run (spring 1960, the speakers changed to P10Q’s, metal corners got added, and grill cloth changed). Shortly after, the circuit changed completely to the more common 6G7/6G7-A.

Originality: I acquired the amp in 100% original form with the original foot switch. A 3-prong was added, I had the amp serviced (changed the filter caps and stored them on the side for peace of mind), and I took out the original P10R’s (to store on the side as well). I found an original set of more powerful later 60’s alnico CTS 10” speakers from a SF Deluxe Reverb. These speakers can comfortably take 20watts each with their original cones (none have blown up yet… fingers crossed).

Tone: the topic of tone is subjective. I’m working on a couple sound clips of the amp. The vibrato of the amp is lush, the best I’ve heard. One of things about this circuit is that the channels are “pre-jumpered”… the controls of both the normal and vibrato circuits affect the overall tone and volume of the amp at all times. Since both channels have their own bass, treble and volume… AND there is a master presence control, the tone variations this amp can produce are endless.

The normal channel sounds just like a tweed bassman/band master/pro (I have a 57’ 5E5-A pro to compare, of course the 15” P15N in the Pro is not exactly apples to apples when comparing with 3x10” CTS alnicos, but the cleans of both amps are very similar)… saggy low end, present mids and chimey high end (which comes out when presence control is above noon).

The vibrato channel sounds very BF super reverb-like. It is much more mid-scooped, big but slightly tighter low end, brighter treble (even with presence on 0, you can still hear the chime on low treble settings).

Once you start blending the 2 channels with their respective volume knobs, you get tones that I’ve never heard before…

My favorite is setting the treble to 0 on normal and setting the bass to 0 on vibrato (I like the low end and mids of the tweed like normal channel but the highs of the vibrato) and then blending the volumes to a ~7:6 ratio (normal to vibrato). Effectively the normal channel’s volume knob becomes the master bass/mid control and the vibrato’s volume knob becomes the master treble control.

Overdrive, which of course heavily depends on the speakers, is warm, very tweed like (especially on the normal channel or the blended setting as I described above). With my 69’ CTS alnico speakers, it doesn’t kick in until around 6. Tons of headroom but not as much as the similar 4x10” versions of the circuit in this period.

The amp takes my 1970 Fuzz Face (BC108C transistors) quite well with the speakers I have in it now. 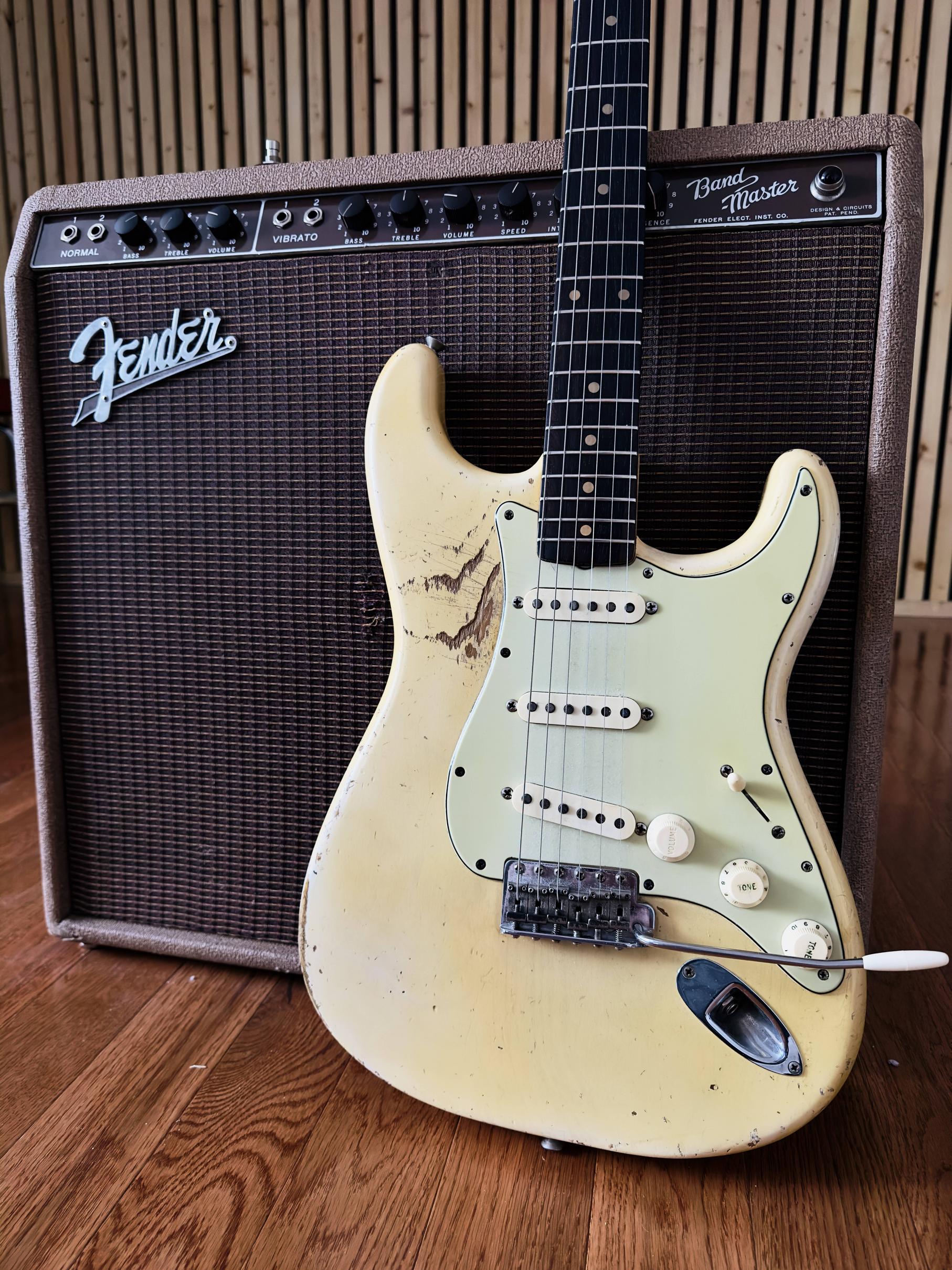 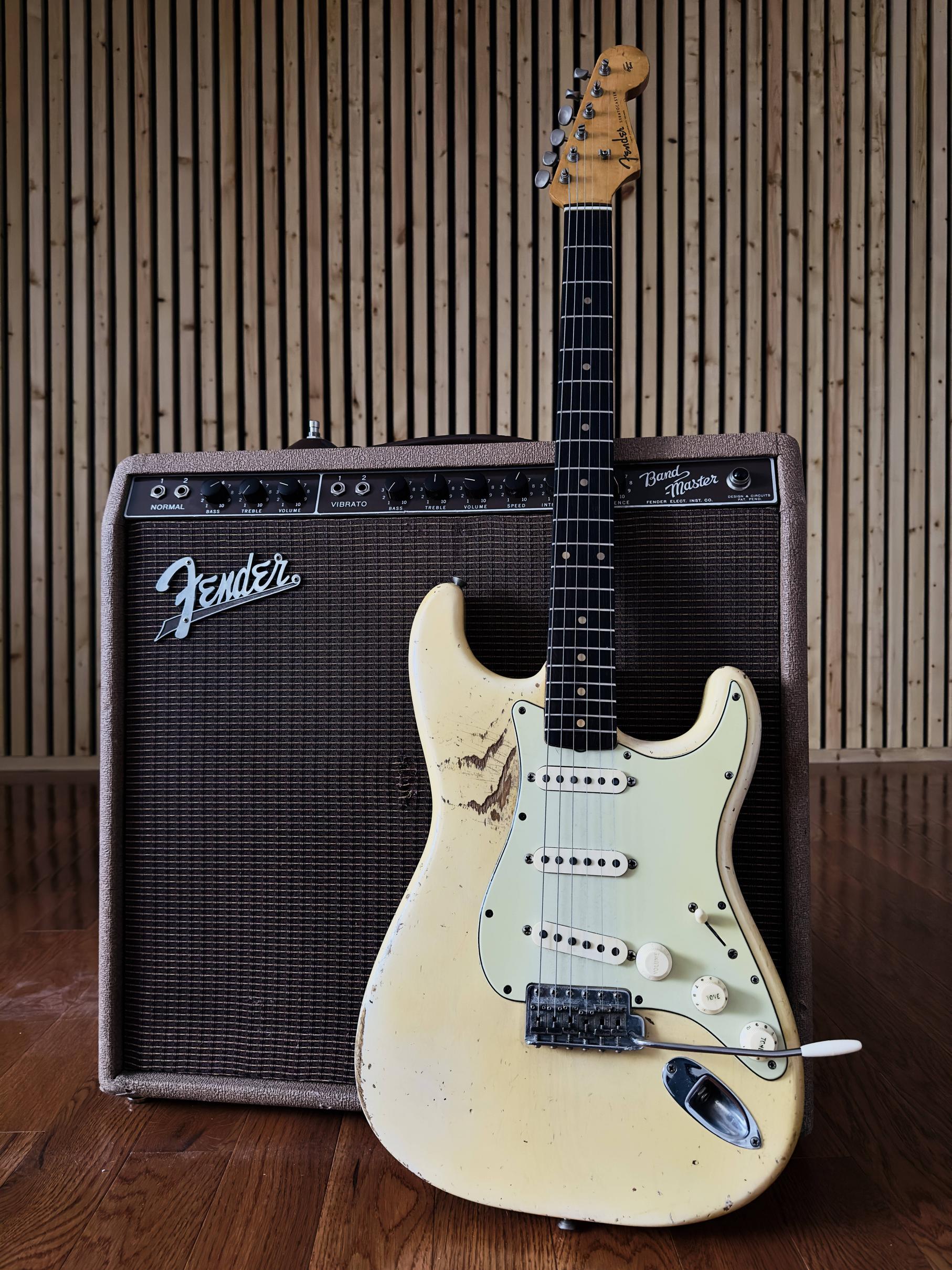 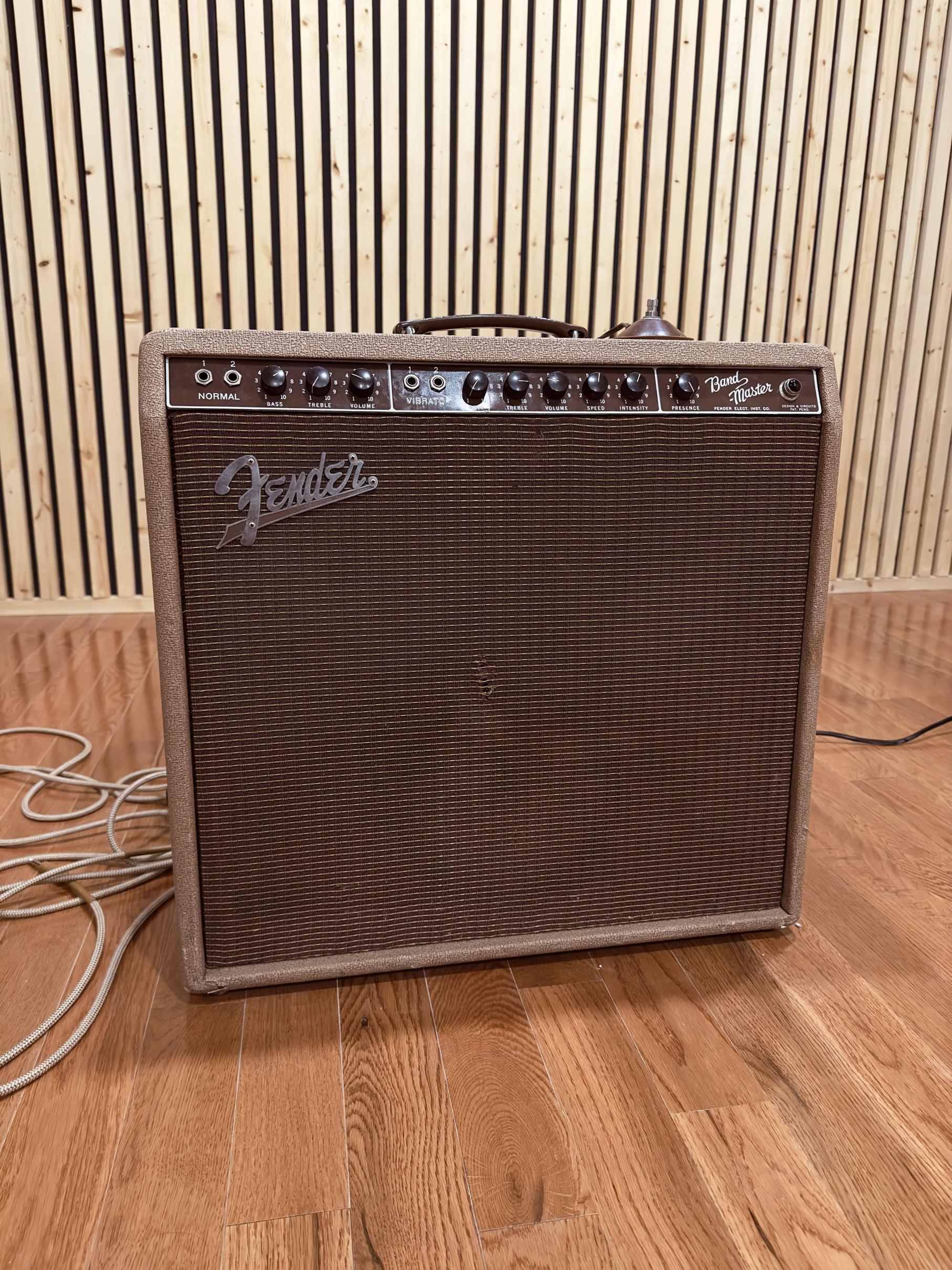 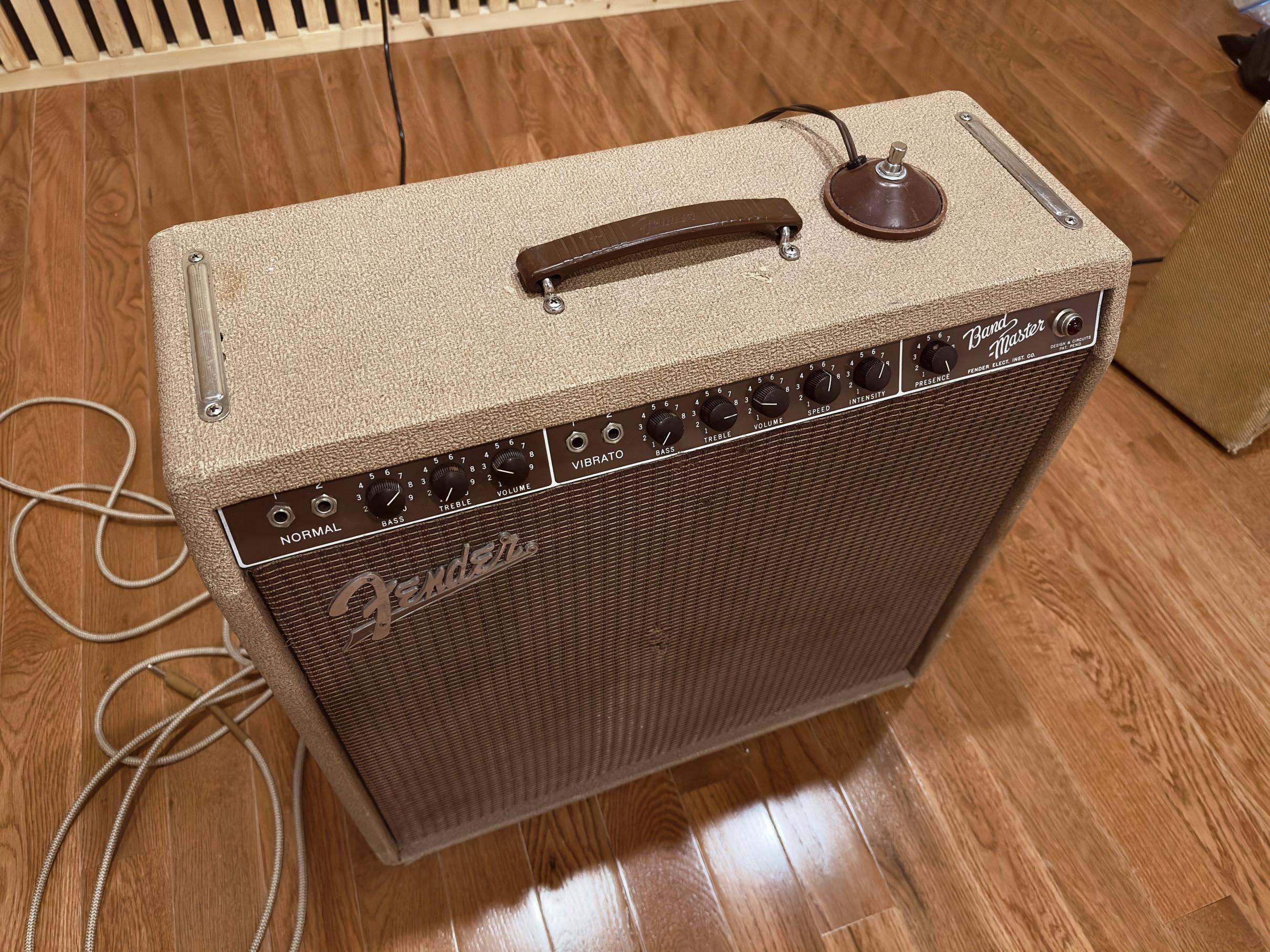 JUMPIN JIMMY ON A POGO STICK. LOVE that strat. i bet u are excited about this combo.

FortyEight said:
JUMPIN JIMMY ON A POGO STICK. LOVE that strat. i bet u are excited about this combo.
Click to expand...

Pretty much all I play now, thanks

Truly a special amp . You are fortunate indeed .
You must log in or register to reply here.