Am thinking about adding a third pickup.

Would love to see pics and some tech specs - pickups used, switching options. Also, thoughts about what works in terms of pickup outputs etc.

Here’s me on mine. Wilkinson bridge and a push pull switch. Yes mex pickups stock.

dlew919 said:
Here’s me on mine. Wilkinson bridge and a push pull switch. Yes mex pickups stock.
Click to expand...

Modern Player Plus. Neck and middle are stock, replaced the anemic humbucker with a GFS dual lipstick. Three-way switch for humbucker/tap/split and a push/pull volume pot to enable neck+bridge. Fifteen different possible pickup combinations, But I rarely use more than four. I added a third pickup, a Seymour Duncan Lil’ ‘59. It does coil-splitting.

A 5 way switch and a push-pull tone pot that turns on the neck pickup, for neck + bridge, completes the setup. I'd just wire a 4-way switch with a regular SS Tele, gives the series humbucker tone for a stealth LP Junior option.

If you go with SSS, then swap bridge and Middle hot wires at the 5-way switch to get neck+bridge Tele tone in the old #4 Quack position.

Last option is look up the Brent Mason Tele where he used a blend pot for the middle pickup.

Grateful Ape said:
Nice. How good are the 2/4 sounds?
Click to expand...

black_doug said:
I added a third pickup, a Seymour Duncan Lil’ ‘59. It does coil-splitting.

A 5 way switch and a push-pull tone pot that turns on the neck pickup, for neck + bridge, completes the setup.

That’s my wiring. I like the neck bridge position best. It’s nice to have the 3 on. And of course the strat positions make it a special guitar.

'05 Nashville Deluxe bottom right...factory TexMex and five way, but with an added push-pull at the tone for N/B and N/M/B. 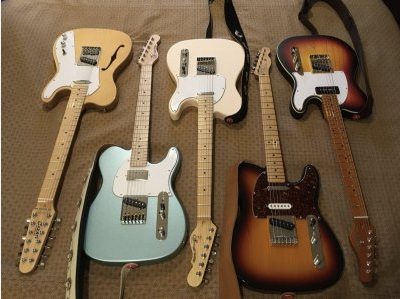 ((added a Schecter PT Custom HH later...not in this photo.))

I always stick this in these threads. I may do one more mod and that's another switch to split the mini humbucker into single coils so it doesn't overpower the bridge and middle as much.

The two single coil pickups are actually noiseless and they are all stock to this Squier Vintage Modified SSH as they called it.

I replaced the stock control plate with my own wiring and the 6 saddle vintage style with a vintage style 3 compensated brass saddles. 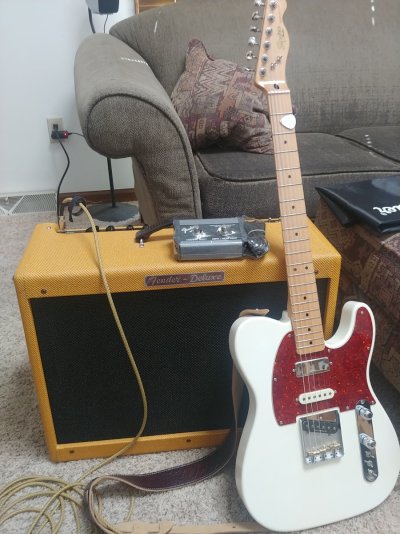 Here’s one I just built in honor of my daughter who is due late August.

It’s got a five way switch and one of Leo’s later ideas, a passive Volume, Treble (cut), Bass (cut) circuit. My next build (a baritone Tele) will also have these tone controls (minus the middle pickup and pullswitches below). I like that setup with a regular 5 way switch really well. I prefer a tele bridge pickup to the strats and I prefer a tele neck pickup to the strats but I love that strat middle and bridge combination when playing rhythm guitar to sing over. I find the regular tele middle position to be a bit bright or something. Only issue for me is the middle pickup on a tele seems to be a bit more in the way when I play than when I play a strat- my hand hits it a bit more for some reason.

Both custom ordered, the Neville has Dawgtowns w/5 way and blend, the Marksound has Florance TE59, TE Longneck, and a Dimarzio Twangmaster w/5 way. Here’s a new acquisition. A previous owner changed the middle to a Blue Lace. I have a Nashville control plate for it…a three way, with a separate volume control for the middle pickup. My Partscaster has a split Seth Lover, an O.C. Duff Strat middle and a Keystone fitted. Five way switch. Mini toggle adds the neck pickup, to other combinations. Pull volume pot, handles the split.
It used to be wired differently, but I really wanted to be able to use the middle pickup alone and this solution ticks all my boxes. The Seth sounds great, when split- which some HBs don't.....

A great guitar, to take to a studio session. Very versatile, for the variety of gigs it handles. Needs careful wiring and shielding, with so much going on, under the plate. Here's mine, gear4music Nashville alike, 160 euros. (169 dollars or 137 pounds ) It was bought as a project to be upgraded, but I admit I like it as is.
It has alder body, roasted maple neck with a maple board. Tuners are good, pots are the micro type and are about to be upgraded, and probably pickups to some toneriders I have.
Wilkinson three saddle compensated bridge has gone on, the 6 saddle steel one was the only fault I found as the high E string would come off the saddle when bending.
It is a top loader only and I have to say I like that and you will spot the contour heel on the back, very nice.
Also has 5 way switching.

I just picked this up after having the new bridge fitted. I bought it in 2015, it's a late 90s model, it had a McKenzie String Bender system fitted when I bought it and I had that removed and replaced with a Stetsbar trem system. Whilst the Stetsbar was excellent the guitar was heavy with it on given the pair of soapbars I'd had fitted.

Stock MIM Nashville body/neck/tuners, bridge is a Gotoh with brass saddles, I know that these are an acquired taste but the bridge pickup is a Creamery Red '79 which is a 5.9 wind, I took the brass saddles to warm the sound a little bit. The soapbars are a low wind set built for me by Sanford Magnetics in Canada back in 2016, same time as I had Jaime at The Creamery build the Red '79. Five way switch, when I went to pick it up someone from whom I bought a thinline Tele he'd built back in 2005 was in, an old Marshall amp is the current demo amp in the shop and he was playing this on it and laying out some Beatles and Love. He mainly stayed on the P90s and remarked that it's great for funk, has the quack in the inbetween settings.

It's a great playing MIM Tele, I also have a MIM Std Tele which I bought new in 2004 and that's also a great guitar, I actually recently had a set of Lollars removed from that and it put back to stock pickups.

I had one some years back but forgot to take a photo. Was the 3-pup one with a bender.

It’s a 2021 Nashville Deluxe Tele with the Noisless pups. Some don’t like them, I do. But with the Strat style 5 way switching I miss the spank of the bridge and neck pups together. I’m going to probably do a pull pot to remedy that.