Nashville Pinecaster Build - with a question

Hey everyone, I’m working on two builds right now. One is a Nashville pinecaster, and the other a hardtail Strat. Both guitar bodies were painted with milk paint and covered with Tung oil afterwards. The Tele is white pine and the Strat is alder. The necks are Musikraft that are 0.84” at the first fret. A lot of the hardware is genuine Fender and the pickups are from Vineham in Canada. I got a Schaller 5-way Megaswitch for the Tele that has a middle position which engages the outside pickups so that it will retain all three original Tele sounds. Other than that, I’m going to shield them with copper foil this weekend.

Here’s my question…. I bought Gotoh locking tuners for these guitars that are larger than the holes in the headstocks, so those holes need to be enlarged by around 0.05”. What’s the safest way to do this? A reamer on a drill press? Thanks. A multi flute reamer close to the required size should be a fairly safe way to open up the holes. I've done it and it worked well.

A reamer would be the ideal tool here. The stewmac one is a bit expensive tho...

Also good to check if there's any finish built up in the tuner holes themselves. If so, you can use the proper sized drill bit to clean that out, and then the tuner may fit better. If I recall correctly, those gotoh tuners require a 10mm hole

I hate using reamers for this. The hole is straight through and you're going to use a tapered reamer to enlarge it? No thanks.

I use a center punch mounted in my drill press with adhesive back sandpaper wrapped around it. 180 grit, because that's what I have. Get a punch, or any short metal rod that's smaller than the diameter of your hole, wrap the sandpaper around it (pay attention to the direction the drill press spins so it doesn't unwrap) and there you go. Slide the hole you're trying to enlarge onto your new sandpaper spindle and turn on the drill press. Carefully move the neck around keeping the shape and don't push hard against it, drill presses don't particularly side loads. It doesn't take much. Stop and check the fit, then repeat as necessary.

I purposefully drill my tuner holes slightly undersized, and then I spend a few minutes doing this with each bushing to get a perfect fit. Because you never know what the diameter of the hole will end up being after you finish it. The tolerance on those bushings isn't always great. You have 6 tuner holes, 2 bushings could fall out if you flip the neck over and the other 4 barely fit. That's what I've found at least.

The reamer is going to leave the hole too big at the top. I suppose if you got one with a really slight taper like the stewmac one it wouldn't be so bad. But I have my way so I do that.

And if you don't have a set of center/transfer punches, I'd say get some. I seem to find a reason to use them almost every time I'm in the shop. 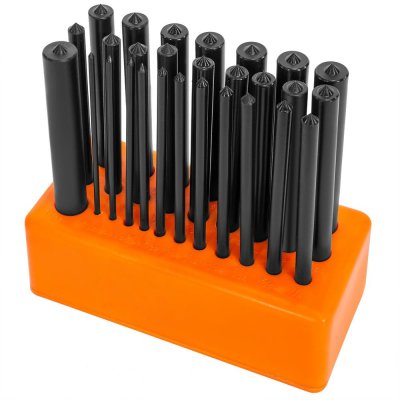 By the way, great looking guits!!!

I especially love the pink strat I enlarge tuner holes with a General brand Reamer. I think I got it from Lowes IIRC. I go in from both sides of the existing holes.

I’ve used a tapered reamer by hand with good results. Be careful if using a drill press...it can grab your stock and take a chunk out.

something like this.. in the Drill press... at a high speed .. makes a nice clean hole..

Steve Holt said:
I hate using reamers for this. The hole is straight through and you're going to use a tapered reamer to enlarge it? No thanks.
Click to expand...

Thanks for the thoughtful response; I was thinking of using a 25/64" or 10mm reamer, not a tapered/conical reamer. I just don't have one handy, I'd have to purchase one at a local machine shop supply store.

That's beautiful! I was thinking of betting the 3-ply pickguard on mine, and I kind of wish I did. The dark like around the edges looks nice with the rosewood fingerboard! Off topic ... what pickups do you have in there, and how to you like them?

Ronkirn said:
something like this.. in the Drill press... at a high speed .. makes a nice clean hole..

That's what I was initially thinking. I may go that route, but I've seen some YouTube videos in which a standard twist drill was successfully used. Apparently, if I countersink both sides of each hole to 10mm, the wood wont rip on either side.

Since were talking about my builds here, I played a custom shop Strat at Cosmo Music (near Toronto) last year, and it had Fender's Custom Shop '60/'63 handwound pickups in it. I liked them; they were a hair beefier than what I'm used to, so I thought I'd try Vineham's "Smokin '62s" Strat set in these. They're handwound A5 pickups that measure 6.3k, 6.4k and 6.6k, which is a little more than I'm used to. I figured that Stevie Ray Vaughn's beefy sound may have been attributed to the 1962 wind that Fender was doing at the time, which was on the hotter/warmer side of a vintage wind.

For the Nashville Tele, I got Vineham's Broadcaster set. I've played these pickups in a friend's guitar a while ago, and was impressed. They're 9.8k bridge and 7.3k neck, and I'm using the same type of middle Strat pickup in this one as in the Strat. It's only going to be engaged in the #2 and #4 positions on the switch, because position #3 engages the outside two pickups.

To be honest, I was ready to take the plunge and get Budz pickups all around, but unfortunately it looks like he's shutting things down and I couldn't make the order. I hope things are well with him. Next, I was ready to pounce on some Don Mare pickups for both guitars, and it was next to impossible to order from him at the time, so I purchased the Vinehams. Now I see that Don's website is back up again and I'm wondering if I should just make the plunge and get sets from him. The Vineham pickups are quite good though.

gabasa said:
I've seen some YouTube videos in which a standard twist drill was successfully used
Click to expand...

a twist drills "bite" is way to aggressive.. In a drill it will dig in and foul the hole.. I've tried 'em, you don't wanna go there.... a ream is designed to do what is needed.. it will shave the wood smoothly giving you perfect results.

I gave a friend a perfectly good neck, and he tried to drill the tuner holes >slightly< bigger. The bit twisted right in and snapped the end of the headstock right off. He was also an ME who should of (and did) know better.

Well, I have the correct 2 degree reamer plus specialized reamers for a number of different size bushings, but if I didn't and it was one guitar and I didn't want to buy an expensive tool I would wrap a piece of 80 grit sandpaper around a 3/8 diameter dowwl and lightly sand to fit. If it happens to be a roasted neck head the warnings about forcing the tuner into too tight a hole.

I'll add to my previous post that the reason I bought the reamer in the first place was to install a pickup in a friend's acoustic guitar. I had seen too many pictures of botched installs and so I puckered up and bought an eighty dollar tool. It has installed quite a few pickups by now and reamed more than a few tuner holes. Having the right tool pays for itself over and over and over...
Last edited: May 21, 2022

gabasa said:
That's beautiful! I was thinking of betting the 3-ply pickguard on mine, and I kind of wish I did. The dark like around the edges looks nice with the rosewood fingerboard! Off topic ... what pickups do you have in there, and how to you like them?
Click to expand...

I wound my own pickups on that one. I don't really get too deep into the snake oil and magic of pickup lore. So they're alright

When the wife and I were first married, we'd often smear each other with tongue oil and then get out the reamer ... Oh, this is about enlarging holes? In headstocks of guitars? My bad.

Hey, I thought I'd post some update pics! I shielded the guitars, but I was having a heck of a time getting copper foil into the through holes from the neck and middle pickups on the Tele. I routed some channels out and that made it easy to install the foil.

Here are a couple of pics. I've got the bridge, pickguard and strap buttons in. The ferrules are in my freezer; I'm hoping that they'll shrink enough when cold to just drop in. To be continued!