I was looking for second Marshall tube amp to back up my Marshall Astoria. I really wanted a SV20 but could not justify the price. I picked this new floor model Origin 50 yesterday for 1/2 price off retail. I just could not pass it up at that price.

I’m really impressed with the tone from this amp. The power reduction works well with a noticeable volume cut from 50, to 10, to 5 watts. The amp still sounds good at each setting to my ears. It takes my OD pedals very well and still sounds like a Marshall. Again, an impressive amp at the full retail price (and I paid 1/2 price). I may try some other speakers in it down the road, but very happy with the sound of the stock speaker. Killer deal on these amps. The Astoria is lovely but the Origin is a great taste of JTM at the Bux.

Used to have the 50 head. Regret selling it.

gridlock said:
The power reduction works well with a noticeable volume cut from 50, to 10, to 5 watts. The amp still sounds good at each setting to my ears.
Click to expand...

I really like how Marshall utilized this feature on the Origin. The tone/feel is not "identical" as you scale down, but each level still sounds/feels great! EG: Full mode is really open sounding... while the lowest setting can get squishy (in a good way) feeling more like a Tweed Deluxe.

Years later the Origin is the amp I use all the time...!

Arfage said:
Okay, it's May 2022 now; is there an Origin 50 schematic around yet? Official or not?
Click to expand...

There's some guy in Australia who modded an Origin 20 (IIRC) to be more like a 2204, and he has loosely scribbled before and after schematics (that can be found here). They don't seem to contain stuff like the circuit for the tilt control or boost switching, amongst other stuff.

I would swear there was a schematic running around the Marshall Amps forum at one point.

11 Gauge said:
There's some guy in Australia who modded an Origin 20 (IIRC) to be more like a 2204, and he has loosely scribbled before and after schematics (that can be found here). They don't seem to contain stuff like the circuit for the tilt control or boost switching, amongst other stuff.
Click to expand...

Thanks. I'm most curious how the first two tubes are hooked up. I like the controls just how they are.

I've seen enough closeups of the PCBs of each one to have at least personally concluded that really the only visible differences I detected were in the power section. Along with the different biasing, there's also the three different output settings, and I imagine they're probably handled a little bit differently in either the 20 or the 50.

The MV pot isn't a dual-gang design, so it's pretty easy to make out that it's very similar to what you have in a 2203/2204. It looks like all of the tone stack bits are on the sub-PCB for the pots, and I wouldn't be surprised if their values were also quite similar to a 2203/2204 (and I think a 33K slope resistor is actually somewhat visible).

...Really the only thing in the preamp that I recall (from memory) looking different between the 20 and 50 were some cathode bypass caps, with some being film-type caps, and the others being electrolytics. But even so, I wouldn't be surprised if they had the same value.

Arfage said:
Thanks. I'm most curious how the first two tubes are hooked up. I like the controls just how they are.
Click to expand...

You can get a rough idea from that guy's hand-drawn schematic: 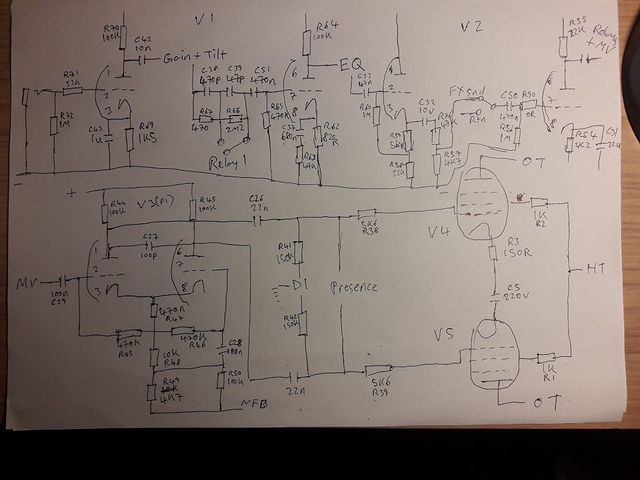 ...He didn't bother including the tilt circuitry, tone stack circuitry, or presence circuitry, though. Also, it looks like he didn't include the relay switching for the boost that probably shorts to ground the 47K resistor in series with V1B's cathode bypass cap. At least 'Relay 1' seems to show how the 2M2 resistor gets shorted out, thereby boosting the gain substantially.

And V2 is all for tube-buffering of the effects loop. That's why the Origin is such a lower gain Marshall, because it's primarily limited to just what's happening at V1A and V1B.

11 Gauge said:
...He didn't bother including the tilt circuitry...
Click to expand...

I actually just went back and looked at a pic of an Origin 50 PCB, and think I may have figured out what's going on with the tilt circuit. The tilt circuit looks like it's comprised of VR102, R101, C101, and C102. What I think is happening is that the pot basically pans between the two caps, one of which is .001uF, and the other is considerably smaller (probably like 100pF). I think they're possibly arranged as being an adjustable bright cap. This can probably be verified by maxing the gain, and then observing if the tilt control still has any effect thru its rotation.

...If the tilt control is indeed a variable bright cap, it would make for a cool addition in other amps, instead of just using a fixed bright switch.
You must log in or register to reply here.

Anyone gigging a 5W valve combo
2 3