Memorable quotes and anecdotes from your (Former) bandmates.

Our drummer was hammered one night and got into a dispute with the barmaid about including his wife's drinks on our tab over the PA. I think that was the same night he got up in the middle of a song and went to the head. He doesn't drink anymore.

Another one from my longtime band of old friends. We're gigging in an iffy joint in Allendale NJ. As we take our first break, the drummer (who lived in that town) tells us his sax playing friend is in the house. Wants to sit in.

My friends still crack up at that one. Of course I folded, and this arrogant little s__t did sit in, resulting in musical shock and awe. (Not)

The first time I sang a song (George Jones’ Her Name Is) in my first good bar band, circa 1983, the lead singer introduced me as a special guest.
He introduced me as Roy Head”s (Treat Her Right) little brother, Dick.
Yuk yuk yuk.
Really.

On a nice note - came off stage one night and my bass player said to me "It makes me proud to be in the same band as you when you play like that." Awwww.

" the more you drink, the better we play" (think that was me)

brookdalebill said:
The first time I sang a song (George Jones’ Her Name Is) in my first good bar band, circa 1983, the lead singer introduced me as a special guest.
He introduced me as Roy Head's (Treat Her Right) little brother, Dick.
Yuk yuk yuk.
Really.
Click to expand...

Never heard of Roy (so I googled...), but, that's hilarious! 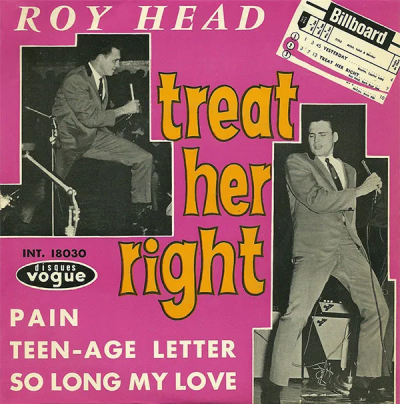 Roy’s one big hit, Treat Her Right actually knocked the Beatles’ Yesterday off the #1 spot on the charts.
Roy was a great showman.
He did all sorts of acrobatics in his show.

brookdalebill said:
Roy’s one big hit, Treat Her Right actually knocked the Beatles’ Yesterday off the #1 spot on the charts.
Roy was a great showman.
He did all sorts of acrobatics in his show.
Click to expand...

Yea! I watched some videos. The man had moves! Talk about fancy foot work! He could put Elvis, Little Richard, Peter Wolf, all of them, to shame! Wow. Surprised I never heard of him, growing up in the northeast, I guess.

Gig in 80's. 3 of us at venue, 5 mins before our slot, no singer or drummer.
They burst thru' the door, both carrying drums & I shout at Paul, our singer (who's a real joker) 'Where the **** have you been?'.
He just looks at me and yells 'DON'T YOU SHOUT AT ME!'. Somethings up!
I catch him up & ask what's happened. He picked up the drummer, put the kit in the back of his car & shut the hatchback.
The bass drum tension rod hit the rear window, small crack. He got in the car & the whole back window shattered, covering the drum kit in broken glass. Oops!

Our catchphrase for the next few weeks was 'DON'T YOU SHOUT AT ME'.

Our keyboard player, to the band of young ladies heading toward the exit:

"Hate to see you go, but love watching you leave."

I was in an original band in the early 80’s… just starting out thinking we were the dogs ‘do-das‘. I’d been away on holiday and got talking to a guy who reckoned he managed bands in London. It sounded plausible and I was enthusiastic about the prospect of ‘making it’! When I got back home I was trying to convince the rest of the guys in the band we should send him a tape and see what happens. To say the rest of the band were sceptical was an under statement. I spent what seemed like hours trying to convince them it was a good idea, they shot down everything I said. After exhausting every logical musical/business argument in desperation I said… ‘But he drives a Jag’

At that point one of our guitarists came back with the immortal line…’Yes…so did the Great Train Robbers!’ (If you don’t live in the UK you might want to look that one up!)

They always were a sarcastic bunch….but even now 40 years later it still brings a smile to my face.

Playing in my last covers band before moving to the country. Trying to teach our drummer his part in some song or other we were doing. His response was, "I know how it goes, I wrote a timpani solo for high school."

Same band, different occasion. The singer wanted to video our gig but left a certain lead at home so off he goes to get it. Time is passing by, the rest of the band had our pre-gig meal and there's still no singer. Show time is fast approaching and we're getting nervous that something has happened to him. Eventually he turns up and we ask, "Where the heck have you been?" His response: "I had to give my newborn a bath."

Killing Floor said:
My favorite is “Never let the drummer drive!” A singer/guitarist used to say that all the time. It stuck.
Click to expand...

Bassist, after dropping my amp off the back of the truck.

Another band I played in years before cut a demo. We were a covers band, playing a mix of Classic Rock and current Top 40 material. Anyway somehow we managed to take our demo along to a local radio station (2RRR FM for those in Sydney) for an airing and an interview. When the DJ asked us what our influences were, our keyboard player piped up and declared "Folk music."

Bass player always used to say~
"Let's wreck this place" before we went on, we were a jazz band

Our frontman at a British Legion club, turns to indicate the drummer and says ‘and congrats to Peter drummer, first gig on his brilliant new drum kit’ it was nice, very nice. Festooned with the Japanese rising Sun. Set up under pictures of HM The Queen and Sir Winston Churchill. Awkward silence, especially from older vets, and I counted in the next song.

A while back talking to a prospective drummer. Drummer, ‘so, what kind of stuff do you guys like to play?’ Keys player, ‘a lot of our own stuff, we all have eclectic musical tastes which lead us to some complex cross genre arrangements’. Drummer looks perplexed. Keys player adds ‘we’re currently exploring a kind of jazz / punk fusion’. Drummer ‘er, OK’. Keys ‘yeah going good, we call it junk’. Drummer smiles, ‘I can do that!’. He joined and stayed for four happy years.
Last edited: Jul 9, 2022
You must log in or register to reply here.

Having Fun At A Restaurant With Your Server
2 3