john_cribbin said:
Always uncoil from the drum if you're running a load:

Should you uncoil an extension lead?

It's also important to fully unwind drum extensions leads. If you leave them coiled, they can overheat and cause a fire.
Click to expand...

This is the truth. Maybe not happen always but the possibility is very real.
The more times the cord get heated/overheated the sooner you can expect a failure. Whether it’s catastrophic or just a PITA it’s very real.

The problem with ratings like this is the length is not included.
I’m guessing those work up to around 100’.
Same gauge but longer length cords cannot supply as much current and the measured voltage at the tool, will drop under load.
Same as a pickup coil really, add a second length of wire like plugging in another cord to the first cord for more length, the resistance doubles and you lose current carrying capacity meaning lower supplied voltage AKA brown power.

When I ran illegal power to my garage though I did calculate that 125’ of #12 AKA 12awg wire could just adequately run my table saw. So I ran a second 12awg wire for dust collector and lights.
Plus put each on a 20a breaker because startup surge spikes more than 15a.
I cheaped out because 10awg wire is really expensive!
Run for years now though with no problems.

Most of the charts on wire size and voltage loss/max amperage are working with typical house wiring, those orange extension cords are often 16 gauge unless you look close and get the 14 or 12 gauge size (they cost more). Here's a typical chart. 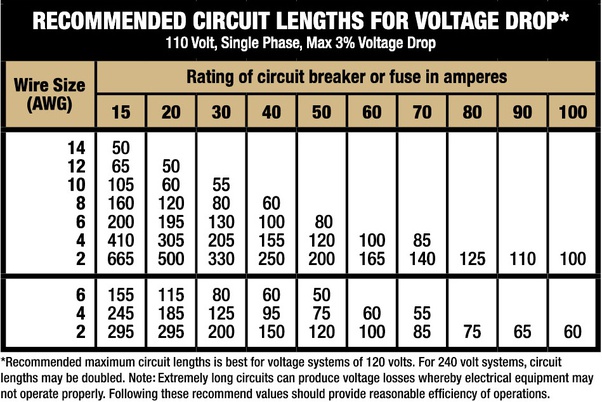 A 50 foot 14 gauge extension cord will drop the line voltage about 2% at 15 amps. Three amplifiers would pull a total of 6 amps. Add on a bunch of effects, you're probably up to about 6.2 amps. Not significant.

Your amp is running at 3. You turn down to 2.5. That's not a significant change as far as current draw goes.

You can't use charts designed around household wire to calculate voltage drop for cordage.

Bigger is always better when using extension cords. There's a big price jump when you get above 14 gauge cords.

If you're doing this a lot, get yourself a voltmeter. In any event, I doubt whatever problem you experienced was voltage related.

schmee said:
Unless it's severely undersize I dont think it's an issue. Are you sure it isn't just the "outdoor effect" causin the brown soun?
Click to expand...

There is stranded wire on the market that's copper-plated aluminum. Aluminum has only 60% of the current-carrying capacity of 100% stranded copper of the same AWG. It looks like copper wire at the terminal ends, but if you cut it cleanly you can see the silver color of the aluminum on the clipped ends.

Cheaper extension cords often have this cheaper wire as the conductor. This may be the cause of your power issue.

Don't cheap out on power cables.

I used my orange 14 and the PRS H head into a Dan Armstrong pine cabinet with a 12" Cerwin Vega. The rest of the band had a separate extension.

Thanks for a very enlightening conversation.

This is the most cost effective way to measure what's going on:
https://www.harborfreight.com/kill-a-watt-electric-monitor-93519.html

Wire resistance depends on gauge and length. The info is in charts. It's usually listed in ohms per 1000 feet.
Ohms law says how much voltage you lose to the wire based on how much current you are pulling. E=IR ( E is volts, I is amps, and R is ohms).
It will also tell you how many watts of heat the wire is generating. W=I^2 R or W= E x I

It's a wise investment to have good stout #12 extension cords if you're going to go 50 or 100'. Mine are 40 years old and still going strong.

Let's say you are trying to draw 10 amps through a #16 extension cord 100 feet long:
#16 is 4 ohms per 1000 feet, so 100 feet is 0.4 ohms R.
Voltage drop will be 10A x 0.4ohms.
That is you will lose 4 volts just in the extension cord by the time you get to your load.
The extension cord will also be acting as a heater E x I of 40 watts.
You have to add the voltage loss to whatever you lose in the building wiring from the breaker to the plug-in. It all adds up.

HotRodSteve said:
Or even two extension chords.
Click to expand...


You check out guitar George, he knows-all the chords

1293 said:
You check out guitar George, he knows-all the chords
Click to expand...

Gotta know at least two chords. I have mastered three. E, A and H.

How I hated the look of the orange cords. Or green. Black only. In the university setting, electronic music concerts are sometimes held. I don't think I saw any orange cords. There are sometimes a lot of cables (of different kinds, such as audio, speakers, mics, etc.) Like others, I tried to create a look onstage that was neat and organized.

For my first few years, however, it seemed as if we always needed one more power cord. My string of assistants would go to the hardware store and buy orange cables, the first ones they saw, I'm sure. It became a long-running joke between my assistants and me. No matter how much I tried, at almost every concert for a while, there was always an orange cord on or near the stage. It was as if a retro-burglar broke into the studios and left an orange cable or two in one of the cable boxes.

I noticed that more and more of my students had their work played at conferences and festivals, which always had setups that looked cool. These students came back from those trips committed to the idea that orange cables made a stage look like a construction project.

Ten years ago I went to a party with my wife. Met a lovely couple, colleagues of hers. Two weeks later he was dead, along with his son, in a huge caravan fire. She managed to get out, and also managed to save their granddaughter who suffered life-changing burns at aged 2.

the cause? A coiled extension lead in the awning running a single small electric heater. It was coiled up, it overheated, and sparked the fire.

Don’t EVER use an extension cord/lead coiled up. EVER

Cyberi4n said:
Ten years ago I went to a party with my wife. Met a lovely couple, colleagues of hers. Two weeks later he was dead, along with his son, in a huge caravan fire. She managed to get out, and also managed to save their granddaughter who suffered life-changing burns at aged 2.

the cause? A coiled extension lead in the awning running a single small electric heater. It was coiled up, it overheated, and sparked the fire.

Don’t EVER use an extension cord/lead coiled up. EVER
Click to expand...

When we set up, my brother had a brown extension cord lying on the floor. I was aghast and told him to toss it. He might be using it for the power supply of his mixer. Then he wanted an instrument cable instead of a speaker cable for the powered speakers. Once again I was aghast. I have separate bags of cables for both.


If you like, get a 50' to run to the band and use a triple head on it with shorter 14 or 16g cords running to each amp, etc. You can't usually find cords shorter than 25' but you can buy a 25', a couple plugs, and make your own 12'. Or a 50' and get three 16'.
You must log in or register to reply here.
Share:
Reddit Pinterest Tumblr WhatsApp Email Share Link