I have the same setup. M1 Mac mini. I tried Ableton for a week and ended up going back to Logic. I did like aspects of Ableton but feel like if I put time into learning the intricacies of Logic, it’s a little more polished for simple recording.

I will also say I am quickly learning that I have little interest in dealing with MIDI on any of the DAW’s.

Learning curve, like everybody says -- Logic suffers from creeping Worditis, in that it's so deep and so capable that it can get confusing trying to do everyday stuff, kind of like driving an 18-wheeler down to the corner for a gallon of milk. Stick with it, all will become clear in time. You develop a few paths through the forest & leave a trail of cookie crumbs to follow next time. I'm using the same setup -- latest Logic on an M1 mini -- and its stable and ridiculously powerful.

My wife can never find stuff on her mac and I tel her the same easy way every time, and every time she asks me the same question. The little magnifying glass icon...

I have an M1 Imac and logic has been rock solid for me.

Maybe explore GarageBand first(a very capable DAW in its own right). It shares some functions and design with Logic. It’s simpler and more digestible. You won’t have to unlearn anything when you graduate to Logic.

Just an idea. That worked for me.

gobi_grey said:
There's gotta be something wrong with mine then... I'm dreading even turning that computer on today but I have to figure out how to the drummer track. What catastrophic issues will it have today? I don't want to know.
That's one of the worst things a recording software can do... change the way something sounds without warning when I haven't even so much as clicked on that track or any associated track. The drummer parameters are the same, why would it turn brush taps/brush strokes into stick hits?
Click to expand...

What I read here has me thinking you'd be uncomfortable with a new top tier Windows system too. My department that I lead deals with this at scale (nearly 1000 employees) so I'll offer this.

My advice is take one thing at a time with the operating system and file management first. Just like Windows and Linux you can tune some characteristics and it fundamentally works the same. Be aware of the way cognitive biases trick us all so easily. If you return this for something else you still have the same matter of embracing change.

Make lists of the issues so you can remember to figure them out and not get too random. Lists that can be questions, tasks and your own personal crib sheet. I live and die by digital notes but go to pen and paper to help learn and remember.

maxvintage said:
My wife can never find stuff on her mac and I tel her the same easy way every time, and every time she asks me the same question. The little magnifying glass icon...

I have an M1 Imac and logic has been rock solid for me.
Click to expand...

If more of our hundreds of employees remembered and used search 1) they wouldn't think I'm so amazing and 2) some stubborn managers would see my constant reminding of their messes and file tossed salads.

If it makes you feel any better, here's an artwork titled,
"What happened when I switched from Mac to Windows" 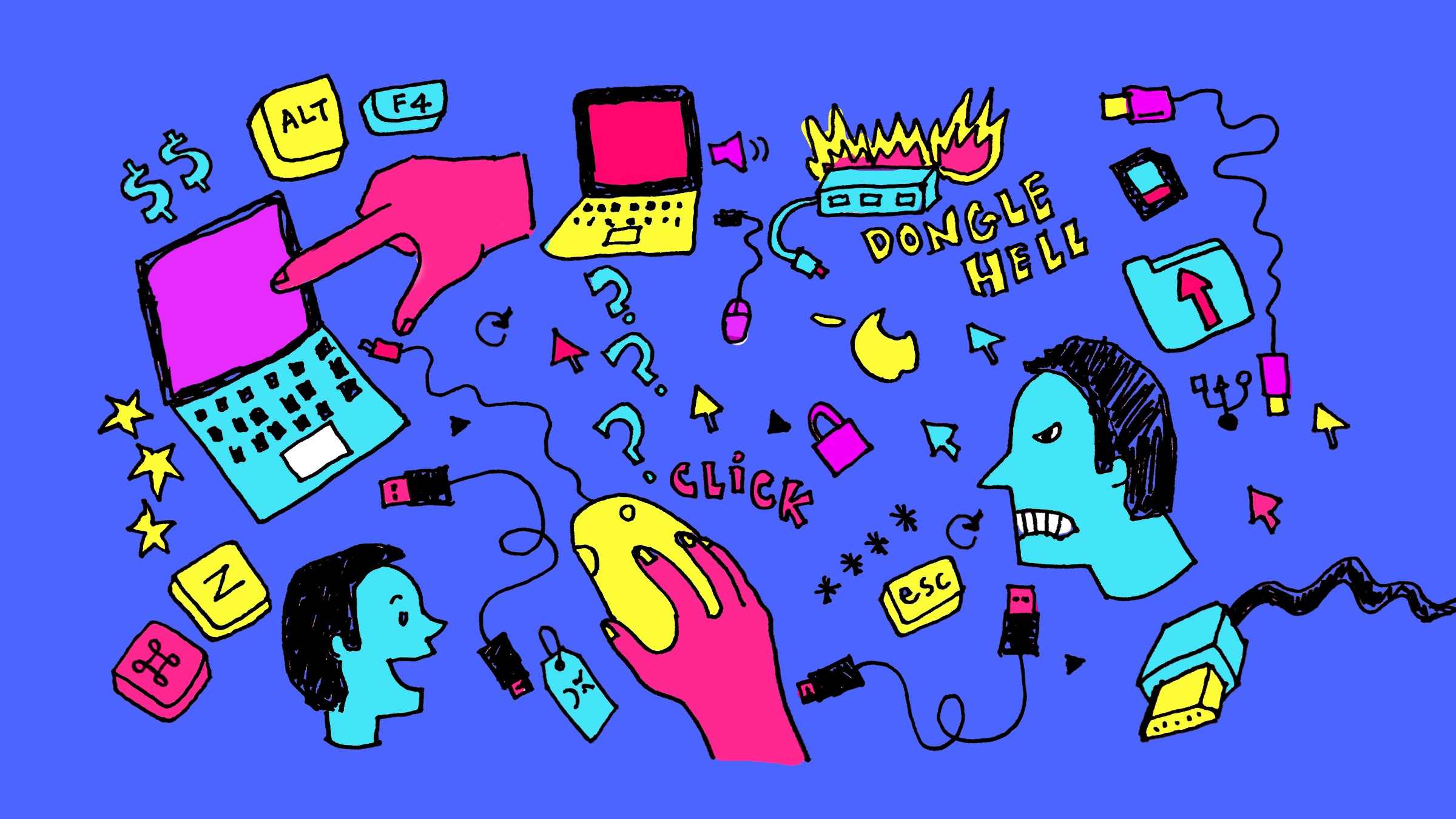 I just recently nuked the Apple OS on my MacBook Air and installed Fedora Linux. Haven't missed anything. The Mac sees only light use like checking email and web surfing and writing this post reply.

relax and use all of the tutorials provided above. but don't just watch them; do them. and, if you are on FB do check out the logic group. i use logic, reason and ableton. i've found they have some of the same things across the board and some things that are different. i get around each rather easily for what i do and actually try to use all three in my music creations to make them mine. note also that there is a manual as well as shortcut keys that will help considerably. good luck!

macOS is fine. Logic is fine. Honestly, I'd be just as irked as you if I was moving to Windows. As far as Drummer goes, I make sure to use that 'convert to midi region' command or whatever it's called, as soon as I get a drum part I like. Then it's locked in.

Being a PC man in the past,I bought a Mac specifically for Logic Pro X. I had to learn how Apple does things and I had to learn Logic. It all took time,but I wanted to do it,so eventually I felt at home.

I was past 60 then,so old dogs can still learn new tricks,if the incentive is there. As GB says,YouTube can be very helpful.
D

Most of what you are familiar with on your old PC began as an imitation of the Mac interface. When Windows first came out, the joke was that IBM now stands for "I Built a Mac." Over the years, they have crept away from each other again, so the differences can be frustrating. I've used both and prefer the Mac.

Not challenging your competence at all. I have those moments all too frequently - Mac or PC. It's just that computers are very literal, and they do what you tell them to, even if it will screw something up. Regarding the changing drummer, and other issues - it didn't do that by itself. You'll find that something you did, or didn't do, caused it to do that. Learning what that was will be very useful in the future.

Timbresmith1 said:
If there’s one thing I can’t stand, it’s working on my computer before I can do any work on my computer.
Click to expand...

I can't agree with this enough! My job is teaching music software, and of course I use it for my own music, photography, etc. However, this sometimes leads to people to assume that I 'like' computers. I do not like them at all - they're a tool that I have to use, that we all have to use, and that's all.

muscmp said:
relax and use all of the tutorials provided above. but don't just watch them; do them. and, if you are on FB do check out the logic group. i use logic, reason and ableton. i've found they have some of the same things across the board and some things that are different. i get around each rather easily for what i do and actually try to use all three in my music creations to make them mine. note also that there is a manual as well as shortcut keys that will help considerably. good luck!

Thanks for posting that

Regarding the Drummer changing. As someone else mentioned, I doubt very much it did that by itself. Something caused it. My very first thought was a Drummer or kit change, even though you said you didn’t change anything. Maybe an accidental click or shortcut? As also mentioned, you can turn it into a midi track if you want to lock it in. I sometimes do that as a copy on a muted track, to keep it while I mess with changes on the original. Just in case I want to go back. As you play around with Drummer’s control pad, it can be hard to go precisely back, since everything is interactive.

I have no way of knowing your general knowledge of Logic, but this might help. It’s for GarageBand, but applies to Logic. He is walking through for absolute DAW beginners (to the point of wearing headphones and recording with just acoustic guitar and voice through the built in mic), but he makes a whole song, which means he covers every basic thing needed, plus useful extras about GarageBand / Logic features. If you follow through with him, making a song too, and then find and do the extra follow-up videos, you will have everything you need for standard recordings.

Except using busses. GarageBand doesn’t do that. Go to Music Tech Help Guy for that. Someone has already posted his link I see.

Anyway, that’s what I recommend. Take notes too. This guy is not as slickly presented as many. But he doesn’t waffle or go on or try to sell you anything, and goes at a good but easy to follow pace, so you learn a lot in the time he takes. All DAWs, including Logic, are complicated. A couple of hours working through a few tutorials is warranted and a small investment really.

I've been an Apple guy for 30 odd years and yes....Apple does some stupid things - mainly on the hardware side - but I'm running Logic Pro on a M1 Mac mini with a bunch of 3rd party plugins and its been rock solid. I've had other issues with external displays etc but nothing Logic/Mac Mini related. Have you got an external midi keyboard connected? Sometimes they can be bleeding controller data to Logic that messes with your midi data via their mod wheels.
S

ieatlions said:
A tad, a smidge, a tiny bit unrealistic to migrate from and ancient PC to Mac an expect everything to be intuitive.

Be patient and immerse yourself in getting to grips with how a Mac and Logic works and I’m sure you’ll have a different opinion eventually.

Logic is a superb piece of software and the new Mac’s are absolutely fire. Been recording on a mate’s new Mac mini and it’s performance is staggering.

My 2011 iMac is still doing a job for me. 12 tracks on GarageBand and rarely encounter a problem. Mac has won me over and I was a staunch windows/XP fan.
Click to expand...

mindlobster said:
macOS is fine. Logic is fine. Honestly, I'd be just as irked as you if I was moving to Windows. As far as Drummer goes, I make sure to use that 'convert to midi region' command or whatever it's called, as soon as I get a drum part I like. Then it's locked in.
Click to expand...

Logic Drummer is deeper than it looks. Learn how to convert your drummer part to midi so you can lock it in as soon as you find a groove you like. There are lots of YT videos on this.
For the rest, be patient. Like others here, when I switched from Windows to Mac, I was lost for a while. Same thing happened moving from PT to Logic. Take small steps.
I

Gotta put in the time to learn the tools.

Sorry you feel that way.

My new M1 came in a few weeks ago.