Live versions that are better than the studio?

Almost all of Rory Gallagher's music. The story I heard was that his early albums were recorded normally in separate bits. Once they began recording the whole band like a gig it all improved but, for me, his live work was so much better than the studio stuff.

This live, blues-jazz electric version destroys the recorded acoustic version. Peter Frampton unfortunately gets pigeon-holed for talk box work and how overplayed “Comes Alive” was upon its release, but in my opinion, he is absolutely 100% the most underrated guitarist in rock history. The melodic sense in his lead work is unmatched. And his sound is absolutely incredible. Despite the audio being dicey in this recording, the slightly overdriven Leslie and 335 combination is drool-worthy.

Live and Dangerous from Thin Lizzy. Pretty much every song I think is better than the studio version.

Such an energy and personality from a band at the top of their game at the time.

I would say that just about eveything from Joe Walsh, The ABB, Johnny Winter, Deep Purple, Jeff Beck, Marshall Tucker, and Steve Winwood is better live than in the studio. Oh, and Eric too.

Led Zeppelin "Rock And Roll" off of The Song Remains The Same live album destroys the studio version.

EspyHop said:
Ironically, Peter Green named the band Fleetwood Mac because he knew he would eventually leave and wanted Mick and John to be able to play on without him.
Click to expand...

He came up with the name before McVie even joined, from what I have read he was hoping that having his (McVie's) name in the band name would help persuade him.

Rush's "All The World's A Stage". To me, every song is better than the studio; even 2112. Just more organic and soulful.

teletail said:
The Rolling Stones Get Your Ya Ya's Out. I liked every song on that Album better than the studio version.

I was going to mention this version of “Midnight Rambler”...the (studio) “Let It Bleed” version was haunting and dark and slightly dangerous, but the live “Get Yer Ya-Ya’s Out” version is killer...great solos on both guitar and harp, and excellent vocals. This version, while not as haunting, seems like the narrator is whipping himself up into a frenzied attack (which, considering the subject matter of the song, is very apropos...)
Plus, “Midnight Rambler” (live version) is the first song I learned how to play on harmonica...I learned both Mick’s harp parts and also the guitar solos on harmonica.

On this same album, the performance of “Love In Vain” far outshines their studio version (which wasn’t bad)...
U

"When You Awake" and "Endless Highway", perhaps others, on the Before the Flood album are not only better, but definitive.

Unionjack515 said:
This live, blues-jazz electric version destroys the recorded acoustic version. Peter Frampton unfortunately gets pigeon-holed for talk box work and how overplayed “Comes Alive” was upon its release, but in my opinion, he is absolutely 100% the most underrated guitarist in rock history. The melodic sense in his lead work is unmatched. And his sound is absolutely incredible. Despite the audio being dicey in this recording, the slightly overdriven Leslie and 335 combination is drool-worthy.

+100! Saw Frampton as a teenager during the original FCA tour at MSG in NY, then again 30 years later in Austin. They actually taped each show on that tour and pre-sold the CDs ordered at the show. A really special way to remember that night as Frampton often improvises his solos. Finally saw him again in Sarasota a few years ago. His live version of "Black Hole Sun" blows away any version Soundgarden ever did. Amazing live player with a great backing band. Also an extremely humble man to boot!

Rory. Anything Rory played live aced the studio version. Rory needed a crowd's energy to fuel him. He took that fuel and burned it bright. So bright it still dazzles.

The UFO album 'Strangers In The Night' is a tour de force. The albums the songs are from are good, strong albums. 'Strangers...' unleashes the band.

'Space Ritual' is a Lemmy masterpiece. The drumming from Simon King propels Lemmy to new heights. 'Lord Of Light' and 'Orgone Accumulator' have been cited by Lemmy as some of his best work.

Anything by the Green/Farley/Spence line-up of The Pirates did live. Their cover of 'Lonesome Train' is often held up as perhaps the sweatiest three minutes in rock history.

Wilko era Dr Feelgood live recordings. Every one of them is lighting in a bottle.

It basically depends on whatever I listen too first.

But it is never as clear of a cut as between a movie and the book.

A late friend got me into live recording's.

He had well over a 1k of them. Some bootlegs. Some he recorded off radio/tv broadcasts, over the year's. Some actual live albums that were commercially released.

And, some he got, he trading with other collector's.

Most importantly, he instilled in me, the joy of how a "band" really sound's without the studio magic.

Not that there's anything wrong with studio recording's... that's an art-form in itself.

The Jason Isbell and the 400 Unit album "Live from Alabama" make you realize most of the songs are better live.
Also, lots on Tom Petty, especially Southern Accent. 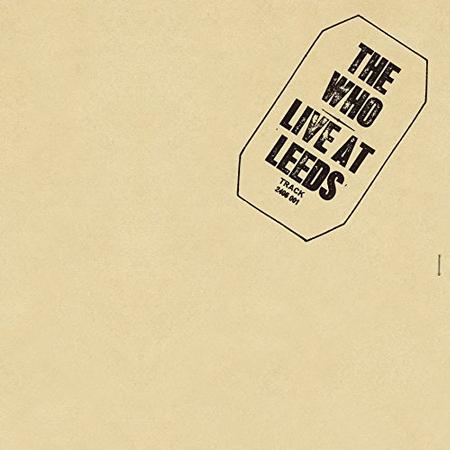 The stuff from "Tommy" on the expanded edition of "Live At Leeds" is so much better than the studio album that it's not even funny.

There is a version of Los Lobos “One Time, One Night” on YouTube from 1992. Dave is playing a red Strat.

Butch Snyder said:
Rush's "All The World's A Stage". To me, every song is better than the studio; even 2112. Just more organic and soulful.
Click to expand...

It's "Exit: Stage Left" for me

Location
The Dry Side

I thought their Viva Hysteria live video they did a few years ago in Vegas sounded way better than the record. Just a phenomenal show!

SixStringSlinger said:
Def Leppard put out a concert (on video, I believe) called "In the Round, In Your Face" (looks like a 360-degree stage with the audience surrounding). This would have been on tour following the release of Hysteria, so Def Leppard were freaking huge.

Anyway, I prefer a lot of these performances over the studio versions. Def Leppard were a good band with good songs, but their studio stuff has this impenetrable layer of over-produced cheese over the top that I can't get over. These live version are recognizably the same songs (and who knows how much of this was re-recorded after the fact and presented as "live"), but without that particular problem. It's peak Def Leppard for me; Joe Elliot doing the '80's lead singer thing. Rick Allen post-accident. Rick Savage doubling on keyboards. Phil Collen as the clean-cut technically-proficient pointy-axe-wrangler. Steve Clark as the elegantly wasted old-school Gibson-slinger.

OK, my further depth into picks vs fingers, plus a new song I recorded for reference.