Omega Gray Side of the Moon Speedmaster... DaveG_NJ said:
Omega Gray Side of the Moon Speedmaster... 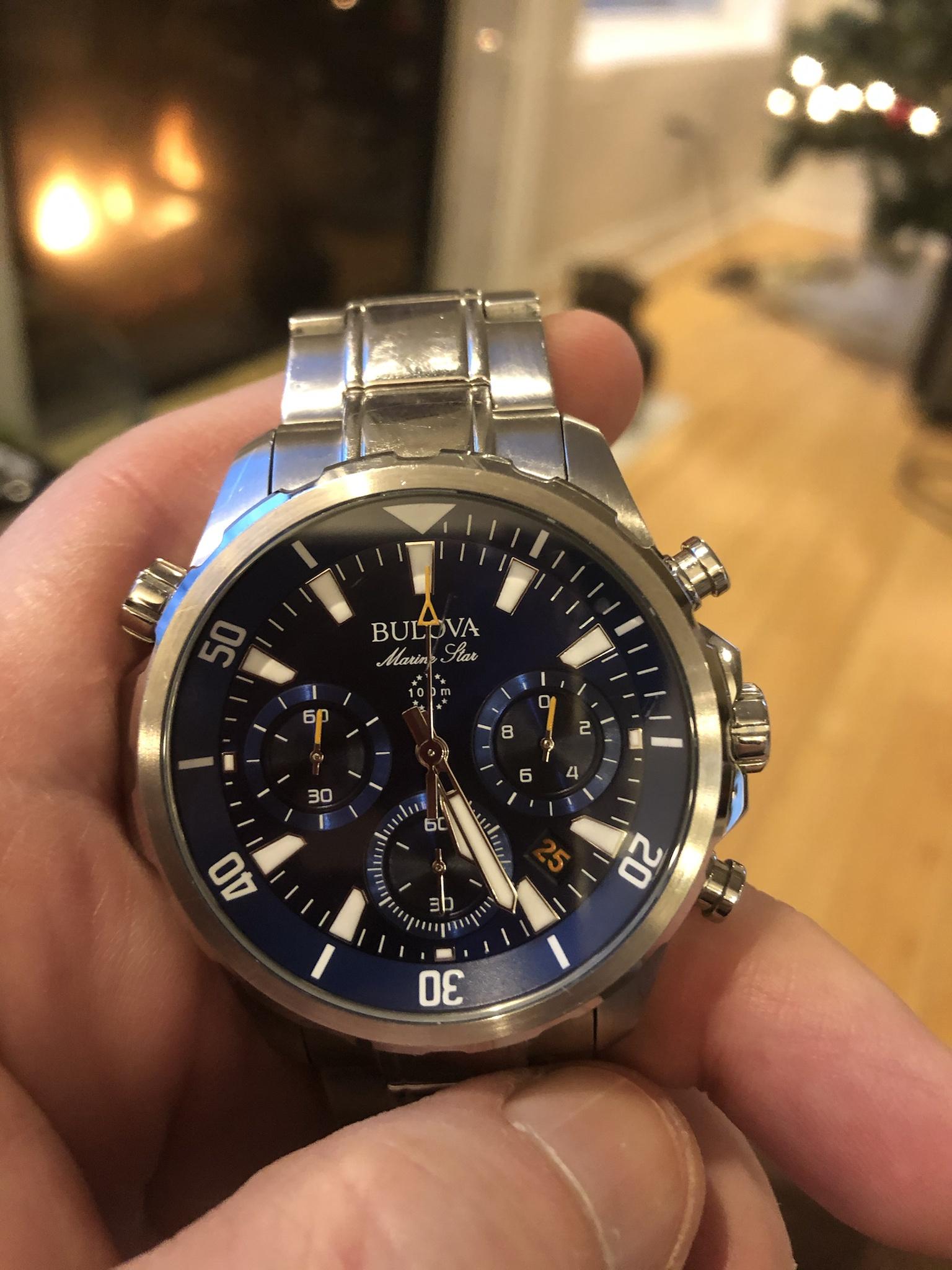 I usually wear a watch. Over the years have just bought something I liked when I saw it. I like black and silver typically on watches. Can't stand gold on me.

No. 1 Main watch is (also) an Omega Speedmaster, a triple calendar. Had it for about 19 years. Got it in NYC as a treat when working there and it was in a January sale. Seems to have gone up a heck of a lot in value over the years. I have the bracelet but I prefer a leather strap. Still love it, but servicing is pricey. I won't wear it when there's a risk of it getting stolen, water damaged or whatever.

I also have a couple of dress watches which seem right for formal suit type occasions. Once is a Certina from the late '60s, one is a recent Swiss hand made model by Dreyfuss & Co.. I bought both used.

And I like wearing a tough watch for outdoor holidays, camping, sport, doing DIY, guitar building, messing about. Also the dive watch is a useful tough alternative to a field watch. Plus I have a couple of cheapies I've picked up when I've seen them. I'm not near my watches other than one at the moment, so I'll post some found images. But these are currently in my group. I liked it so much I had to get the PVD sibling, lol. This one mostly lives on an orange NATO strap, which looks awesome. My beater watch, got it for like $85 a few years ago. Cool look overall. I would love an Omega Speedmaster Moon Watch, but this thing is awesome too. Cool story behind the Bulova Lunar Pilot--it's a real-deal moon watch as well, made to the same specs (so it's not a copy of the Speedy...it was designed to the same NASA specifications so the design similarity was due to specs). This reissue is quartz, but a super high frequency quartz. I really love this thing. Another Bulova, the A-15. Super cool automatic. Really looks and feels nice on the wrist. Got it for a steal in my opinion. Xmas present from the wife and kid. Dressier watch, but with a cool orange accent. Triwa is a Swedish company, doing some neat things. Watch looks better than this pic in person, the surfaces are brushed SS, not white. It pops nicely. Another Xmas present from the wife and kid. What a cool retro chronograph. Has the ubiquitous Seiko mecha-quartz movement so that the chronograph (orange "seconds" hand) sweeps like a mechanical watch, but overall it's quartz/battery powered. Really great design, amazing case design (twisted lugs and other touches borrowed from Omega). Just a cool look on this one, and an amazing leather strap. On my wrist currently, the Hamilton Pilot day/date (AKA Cooper watch, from Interstellar). Super awesome, just amazing details in this thing (the applied indices all have texture to them that makes them pop or semi-disappear depending on the light). Just a great modern update to a flieger design. Lastly, I've never really had a dive watch, and have vacillated on whether they were for me. I don't really like the super fat indices and crowded dials on some of them. I don't dive. I like the idea of the usable bezel but don't "need" it of course. I wasn't about to drop a lot of cash on an expensive one. I looked around, considered cheap Timex divers, some from Orient, Seiko, etc. Almost got a couple but if I waited a day the urge subsided. Then I ran across this one and it really stuck with me. This is a micro brand doing some cool stuff, and building watches (according to reviews) that are way, way above their price point in terms of build quality. This Phoibos Wave Master uses a Seiko NH35 automatic movement, is 300m water resistant, and features an engineer bracelet w/screw links. Sapphire crystal, ceramic bezel, etc. Just loads of top-shelf appointments, and I paid $265 shipped. It's on the way to me now, so the stock pic is all I have. The dial design and color just really attracted me. A modern, cleaner look for a diver but one that strikes the right balance between tool watch and cool design IMHO. Not your typical diver. And there you have it. I'm currently building a watch box with 10 slots, so I have one more I can fit in there. Then it's sell one to buy one territory!

Not super expensive but enough that it should of had more longevity
Click to expand...

I got one of those years ago, same thing. Lasted a couple of years, then crapped out.

That's weird. I have two Eco-Drives and they work like a charm. Had them for 8-10 years, no issues at all. Charges fine off of the light from the lamp on my dresser. Citizen is known for their Eco-Drives, so I gotta think a non-charging one is a break from the norm.

GibbyTwin said:
I have a 1978 Omega Speedmaster. I don't wear it anymore. I've mostly stopped wearing watches since I started carrying a phone around. The very few times I strap on a watch I just use an old Timex.
Click to expand...

Fendereedo said:
I've got around 10, or 11 watches, but I rarely wear them. I've just never been a watch person.
Click to expand...

My Breitling Colt from circa 1976. I bought it in Grand Cayman. Wore it everyday for many years then had to send it off to Brietling for repairs. They replaced all the internal workings from NOS parts. I have been wearing an Invicta ProDiver which I recently broke bending the stem. Pulled this out and have been wearing it again. Sorry about the cell phone picture. notmyusualuserid said:
How did you manage to gain 10, or 11, watches if you're not a watch person?
Click to expand...

Family and friends buy them for me. I should donate them really.

I probably posted this $25 Casio much earlier in this thread, but it's still going strong.... MTPoteet said:
I got one of those years ago, same thing. Lasted a couple of years, then crapped out.
Click to expand...

That is odd. Been wearing mine nonstop for more than 5 years and it’s a rock, and I sure don’t baby it. It’s replaced my beloved Seiko Monster!

Saw the old thread so today is a “Surprise watch wearing”. My wife used to wear little quartz watches until she could no longer see ‘em. I bought her a couple of slightly bigger ones but she soon quit wearing those and I gave up. We moved into a new house last October and while trying to fit all stuff in new spaces I came upon a watch I didn’t recognize, a small Citizen quartz diver. My wife immediately thought I’d hidden a gift for my mistress—after 48 years together!!—and I racked my brain trying to remember where the mystery watch came from, then it hit me: we spend part of spring in coastal FL and she sometimes walks remote beach while I fish. She’s far from a timekeeper and might return hours later than planned so I bought her this watch. She wore it for exactly one beach walk, decided she didn’t like it so I rinsed it off and put it back in the box…4 or 5 years ago!

She wanted to try it again and now for some inexplicable reason loves it, and hasn’t taken it off since. Go figure. Funny, that this thread has resurfaced, just as both my watches have given up the ghost.
Can't decide, whether to go cheap, or slightly less cheap. I know, if I spent more then £200, I'd lose the thing- or break it- pretty much immediately.
A Field Watch, perhaps? Simple and robust- like I try to be. Well, I don’t wear a watch. Sometimes I wear this. I wore a watch for a sho time, maybe five years. Ended up with a spot from the back of the watch my Dermatologist burned off with that cold spray. Never again.

Your Jet Stream On Drugs

Best excuse for not practicing contest! Give us your winning excuses!!
2 3 4