well mines a 1979 Mesa mk2a that makes the telecaster sound so warm and lovely and a 74 twin reverb that just sparkles with my tv Jones loaded guild starfire . View attachment 902824

I can’t believe I was going to sell the old Mesa . This was the third time buddy failed to show up so I told him “ I’m tired of waiting all it does is makes me anxious and I can’t deal with that. I also only had it for sale in order to buy the fender and I got that so I don’t need to sell it”
Click to expand... teleMc said:
Some nice amps there... Just a side bar. Does anybody know where to get speaker cloth like that... asking for a friend.
View attachment 903745
Click to expand...

1970-ish Sunn Solaris that I used in the mid to late '70s. I also had the matching 2x12 cabinet but don't have a picture of that. I sold both five years ago because I didn't want to bother shipping them across the country. I certainly don't need anything this big and loud anymore, but I do sometimes wish I could plug into it again. 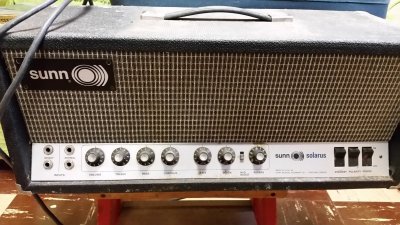 Amps of what "vintage"? I hate the use of that word when speaking of instruments/amps..... I have a "vintage" '18 Telecaster....that's it's vintage wstrnswingster said:
Amp King, Very Impressive! What's the small black amp, looks like painted tweed, between the 2 woodies in the first set of pics #4? Want to walk us through the tweeds in that first set of shots? Are the woodies originals? Looks like an Alamo Amp-6 hiding behind them. Lastly, what are the big Polytones?
Click to expand...

Rustbucket said:
For similar effect, I could lone you my 5 year old.
Click to expand...

Here's a little story-----Believe It or Not,----in about 1997/8 I took Gregg Hopkins and Bill Moore, authors of the Ampeg book, to interview Jess Oliver, who I had not seen in over 25 years at this time. Jess told us that Everett Hull had an Ampeg employee whose sole job was, and I kid you not, to spray paint all of the Ampeg grill cloths with this , I call, Squiggle/Swirl paint. I guess that this guy was a little older that 5 years, hopefully, I think,?????-----LOL. 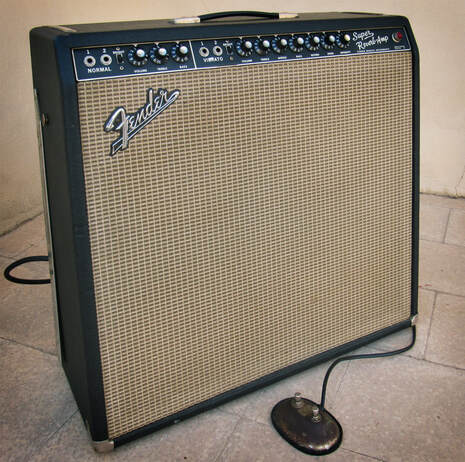 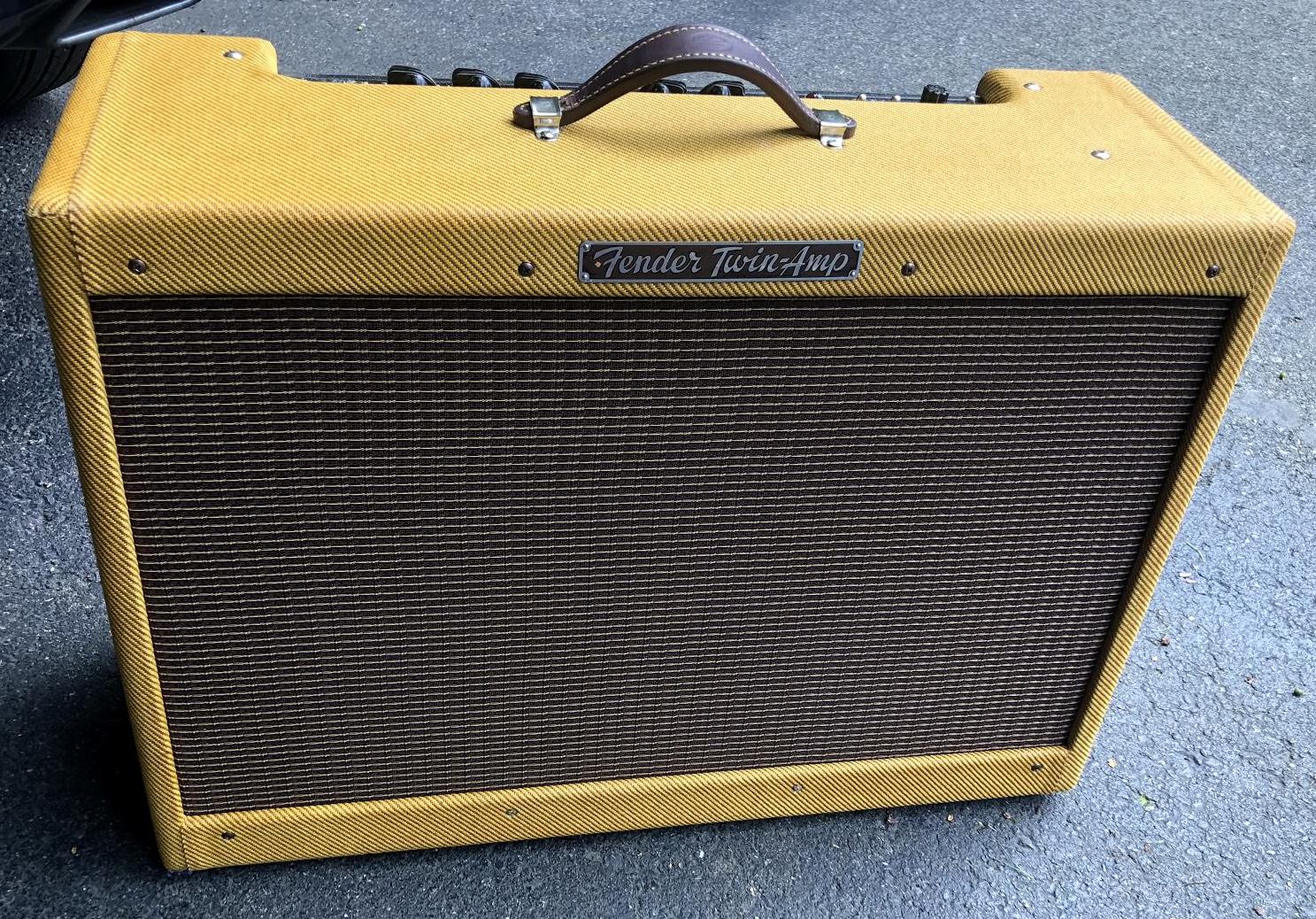 What it looked like when I first landed the big fish: 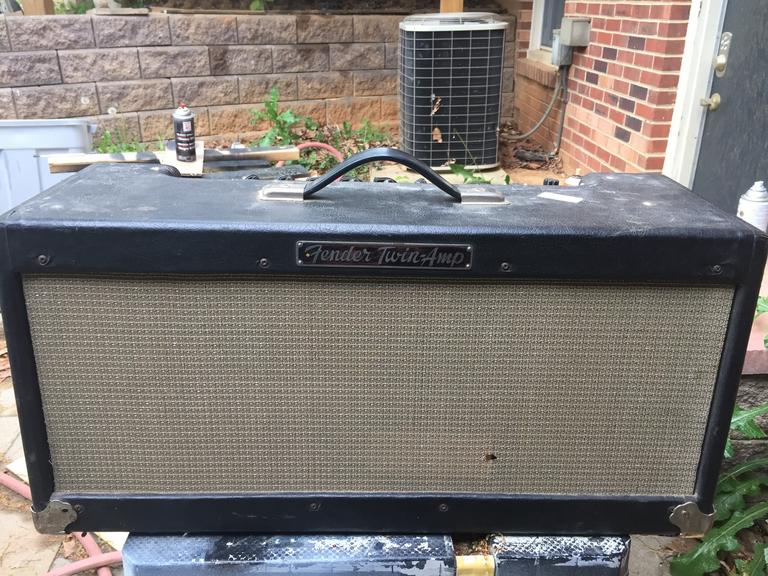 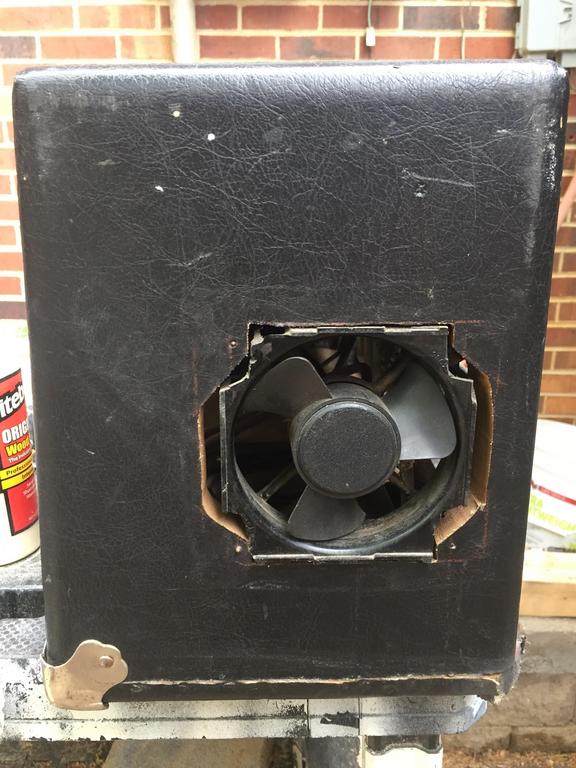 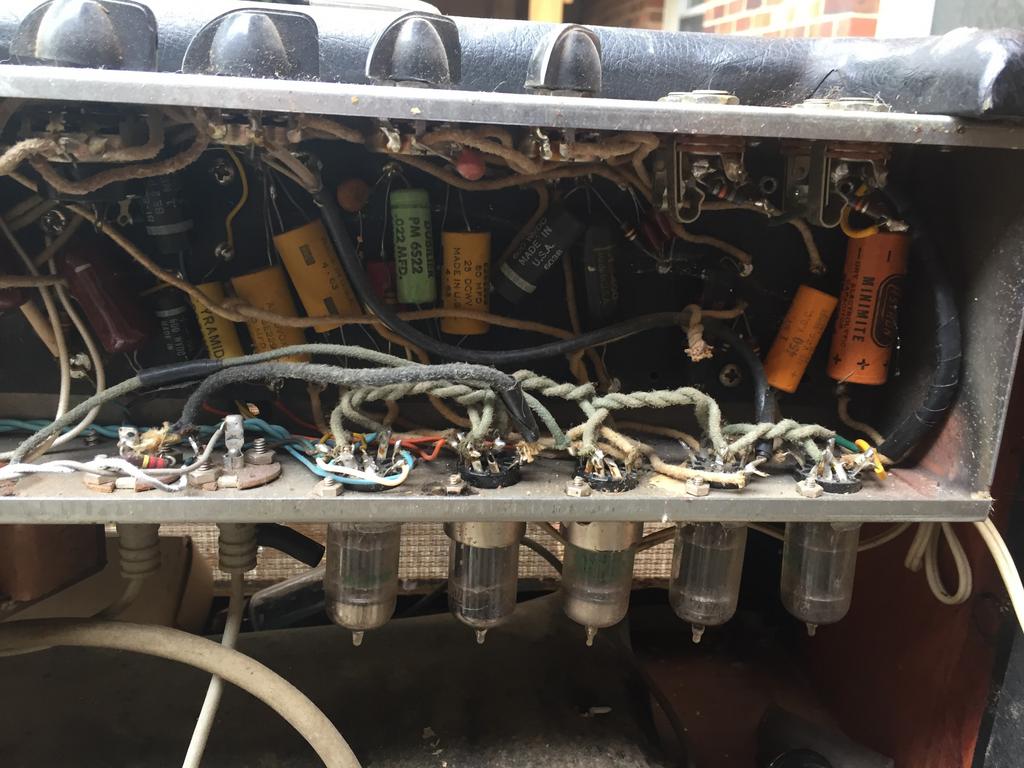 What happened to the original? The hole in the back, the black tolex, the weird cab?? What happened!!!??? Nice restoration job!
Last edited: Sep 29, 2021 The best I can do: Late 1964 Vibroverb. Three digit S/N after several zeros. I had a later one and the script was larger on it. The JBL in it is not factory. Here are a couple, with an Allen Encore build, and a 5E5A build. The eyelet board on the DR had become conductive and was creating noise, so I overhauled it. New Garrolite board, cloth wiring, including the heaters (which wasn't necessary, but very pretty). Jared Purdy said:
What happened to the original? The hole in the back, the black Rolex, the weird cab?? What happened!!! Nice restoration job!
Click to expand...