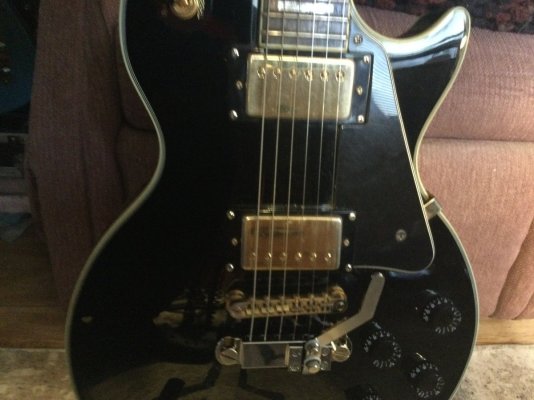 Cool! You're giving me an idea about my Flying V...

Cool!
There was a device marketed by Eliphone years ago called an EZ Bender.
It mounted to the stop tailpiece.
It worked like a Bigsby Palm Pedal.
I used to have one.
I need to find another one for my Hohner LP knockoff.

brookdalebill said:
There was a device marketed by Eliphone years ago called an EZ Bender.
It mounted to the stop tailpiece.
Click to expand...

Yeah, that was Richard Bowden's invention! I had one on one of my Les Pauls as well, but I just can't use palm devices - I use too much palm muting and varied picking positions.

He still makes them - plus a Tele version and two different acoustic versions, and sells them on his website:

IMPORTANT: To anyone who had one of the old Epiphone "EZ Benders - they were, honestly, kind of cheesy and there were (as Richard says) "manufacturing issues". But they were inexpensive.

The new ones are MUCH more expensive, but FAR more refined and really well made I've played one of the new ones and as far as I'm concerned, they are exponentially better, more stable, accurate and fit better than the Epiphone EZ Bender.

Back to Richard - he played with Linda Ronstadt and was in McGuinn's first post-Byrds backup band. He loves Clarence and paid homage to him by covering as many of his "signature" licks as he could on Byrds tunes.

Later he did some albums with th late Sandy Pinckard that are some of the most hilarious stuff (and filthy - be warned!) I'd ever heard (and he's a complete nut case in person. He used to work at Westwood Music and I'd go there just to talk to him!).

I have an LP deluxe that I love, but it needs a bender! This might do the trick.

Does it fit in a case with the arm like that or is there a way to rotate it out of the way?

It fits in the case. It does swivel though.

brookdalebill said:
Cool!
There was a device marketed by Eliphone years ago called an EZ Bender.
It mounted to the stop tailpiece.
It worked like a Bigsby Palm Pedal.
I used to have one.
I need to find another one for my Hohner LP knockoff.
Click to expand...

This one is so easy to install. No mods needed and can be reversed in minutes. It is smooth and non intrusive.
You must log in or register to reply here.

Who will install a b-bender in a Les Paul J.?