Well, yesterday actually. I usually don’t buy guitars in this price range from GC sight unseen. But there were only two 3TSB/RW in their entire inventory. One hanging on a wall (played that one), and one in their warehouse. I was afraid I would end up with a guitar someone had returned, but I received one with the original fender seal intact. That being said, the neck was obviously in need of a truss rod adjustment. It had been in a warehouse since January, so no surprise. The action was ridiculously high, with a ton of relief. Once that was sorted, a slight saddle height adjustment and intonation tweak, I was good to go.

The rosewood board is just gorgeous, not the old school solid dark RW, but beautiful streaks of deep red running through it. The nitro finish is nicely done. The neck is not sticky, but slick like my Gibsons. The medium C neck feels familiar, and surprisingly, the narrow tall frets are a non-issue. I expected more of an adjustment period. The fretwork is absolutely perfect. I got the action really low, and there is zero buzzing.

The CuNiFe WRH is everything I’d hoped for. Super high definition that transmits picking dynamics better than I could’ve dreamed. The clarity is amazing. The WRH alone makes the guitar very special. The bridge pickup has without a doubt the best Tele tones I’ve ever heard, and not ice picky at all. People say “bell like” all the time, but this pickup is the literal example of that phrase.

I haven’t weighed it, but it is surprisingly light compared to my Player Series Tele. It sustains in a way I never thought a bolt on neck guitar could. It’s a two piece body. I’m a Les Paul guy as a rule, but this guitar holds its own against my Standard 50s. All three positions of the selector offer great tones. You can coax any tone you want from this guitar. It has classic Tele twang and spank, but can lay down fat AC/DC chords as well. It has serious cut, and gets as rude as you want. It aint getting buried in a mix! It is really a do everything guitar that doesn’t compromise in the process. I’m just blown away. Worth every penny. That's awesome. Congratulations! I've been eyeing these since they came out. I really like the Mocha finish one. I just kept buying other guitars instead of this one and kept saying to myself, "Eventually, I'll get one". After I get this, I think I'll be "set" with my Tele collection for awhile. Happy NGD!

Oh, and how's that Neck pickup with the Cunife?

Double Stop said:
That's awesome. Congratulations! I've been eyeing these since they came out. I really like the Mocha finish one. I just kept buying other guitars instead of this one and kept saying to myself, "Eventually, I'll get one". After I get this, I think I'll be "set" with my Tele collection for awhile. Happy NGD!

Oh, and how's that Neck pickup with the Cunife?
Click to expand...

It’s like no humbucker I’ve ever heard! Really the WRHB is worth the price of admission on its own. Amazing cut from a HB.

Woe I didn’t see this coming

I'm waiting for the 2xWRHB thinline model!! if it becomes available, Fender, shut up and take my money!!!

Nice. One of my absolute faves. If I can only take one guitar to a gig and it's gotta do it all, that's a winner.

I'm waiting for the 2xWRHB thinline model!! if it becomes available, Fender, shut up and take my money!!!
Click to expand...

They are phenomenal pickups!

Beautiful. The reason board looks great.

Congrats; that's a nice one!

Wau, that is a stunning guitar! I would have also bought one like yours immediately if I didnt already have my ol' Tele Deluxe in avatar photo.
WRHBs are really worth their money, every penny!
I have no doubt that you will be enjoying this guitar for years.

Congratulations! I love Tele Customs and yours is just very nice, enjoy it in good health. 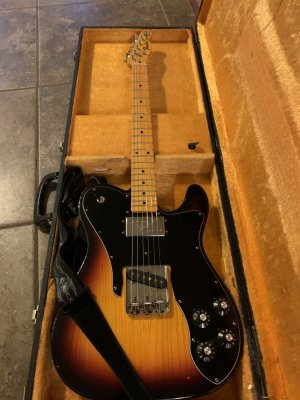 I'll admit it. I'm jelly as hell. All I can afford is a Monoprice Indio, which is good for what it is, but it ain't no Fender 'Murican!