introduction to the Tele Guitar

The wee Peegoo was living with his family in Waipio Acres on the island of Oahu. He was sitting on the floor in front of the teevee and a brand new show was on. It was called Hee Haw, and Buck Owens was playing a song with his band.

Thank you, Mr. Don Rich. I play guitar today in large part because of you.
D

I stumbled on what I thought was a blog post or something where this guy was seemingly wandering around his yard picking up pieces of old wood and junk, and ended up making a really nice tele out of them. I thought it was so cool, I started reading other stuff on the site - which turned out to be TDPRI.

I had always known about teles. and I've owned an old Strat since the early 80s. Reading TDPRI made me want a Tele real bad, so I ended up with 2 - a CV50s and a MIM. I just sold the MIM recently. I love the CV

Two years ago. Lifelong Les Paul player occasionally drifting in and out of Strats. I walked in a shop intending to get an Epiphone semi hollow and happened on a G&L Tribute Asat Classic (Indonesia). The build quality and resonance on this one is so high I still feel like I got away with something.

I've had various guitars over the last 50 years. The problem with non-teles is that they either had "too much" (such as an extra tone and volume knob, or were too heavy) or "not enough" (more feel) for me.
H

I've told this story before... I was in the Marine Corps and had just got back from being overseas. While deployed I had been listening to a lot of Jeff Buckley and had also learned that Jimmy Page played one...

Anyway I got back to base in Hawaii and I had a fairly large wad of cash burning a hole in my pocket, having not spent any of it. I knew I wanted a Tele, so one day while in downtown Honolulu I thought I'd stop by a guitar shop. The guy behind the counter informed be they were closing in 5, I said it won't take that long. I asked where the "Mexican Teles" were, he pointed out a handful on the wall. I walked over, decided I liked the sunburst finish the most, so I took it down and said "this one please", totally unplayed. Then I asked for a cheap combo amp and he suggested the Fender GDEC. Sure! I had a new rig and it took all of three minutes and I think $900 or so out the door.

The first time I plugged it in was back on base and man, it was just so different from my humbucker guitars! I don't know how I went 10 years without really playing single coils, but it was instant love. My induction into the church or 60 cycle hum.

Anyway, I did sell that guitar to a friend, but it started the love affair with "the plank" and is the reason my number 1 for the past 5 years has been an Esquire with... drum roll please... A Don Mare 2-Speed StangRay! 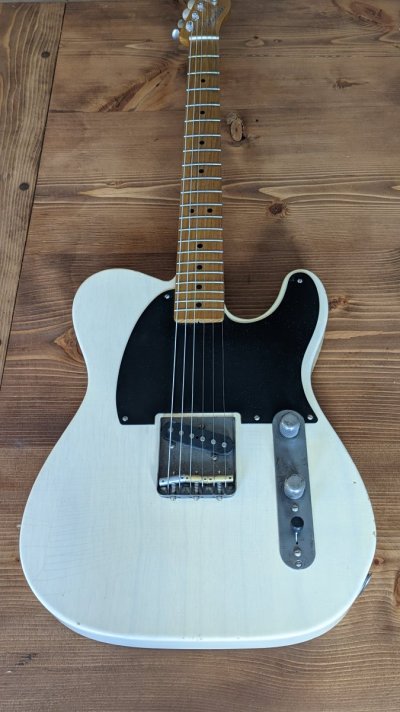 Edit: The friend I sold her to was kind enough to snap a pic of my first Tele, so here she is!. 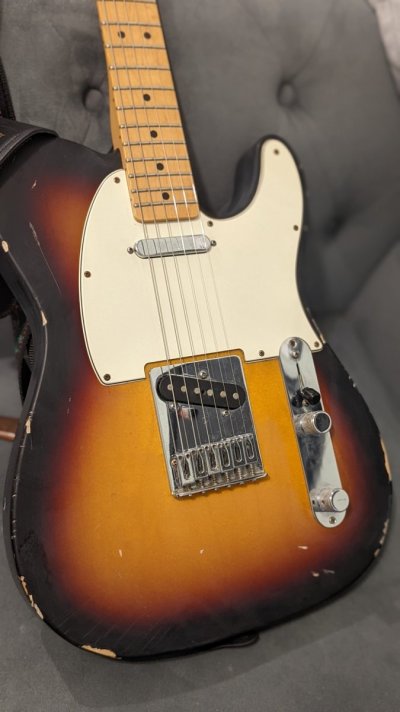 I'd been playing since 1999. I spent the time before 2005 seeing teles as country guitars. Then tried one and realized the bridge pickup was fantastic for rock and blues.
I saved up(worked at a computer store)for a highway 1 tele. Went to GC, played all the Mims, hwy1s, Korean ones with Duncans, everything in my price range. Kept coming back to a mim FSR with a natural finish ash body.
It was my backup guitar for ages. Bought an 80s US standard this year for the band I was starting because I was going to use tele. Bought a Japanese Junior tele (and immediately modded the snot out of it) 2 months ago.

I should be set for a bit on teles.
Sound and utility wise they always win

I had just sold my strat (was playing a strat in a band up to that point) for some money to pay some college tuition and decided to start a country rock type band to play a few weekends and make some cash.

I was well aware of tele's and not just as a " country and western" guitar. Bought a brand new white tele and played it through college. This was around 1976-77.

Unfortunately I don't know what happened to it but my love of tele's continues to this day. I play more traditional blues on it now.

The die was cast when I heard a Danny Gatton album in 1998. This resulted in a new James Burton Standard Telecaster that I still have.

When I was floored by Roy Buchanan's first album in the 70s.

Dad, had a telecaster in the attic, I became interested in guitars

He also had a Gibson marauder, the marauder sounded better but the tele felt better, I did not appreciate teles at the time, it was dads old country guitar and being the time of NU Metal was not appealing to me at all

Life happens I play on and off, end up getting into jazzmasters, the jazzmaster was my gateway back into twang, decided to get another tele

Been on the tele train ever since

As a kid I wrote to Fender each year for their annual catalogues, and put up the pages on my bedroom wall. Did not care for the looks of the Teles relative to the Strats, Jags etc. Starting noticing a lot of Teles played by bands on 60's and early 70's variety and music shows; and George's in the Let It Be album gatefold. Shortly after, stood front and center of Kath at a Chicago show and 'got it' Ahhhh! Few years after that, got my first one at school, used at ~ $250, and promptly stripped off the blonde (aarrggh!!) and re-finned with my Mom's furniture stain/finish. Loved it and played it for 20+ years before trading it at a guitar show ... and have asked myself WHYYYY?? ever since!

Playing drums in a country band when I was about 19, in tge early 70s. Lead guitarist was a good friend of my parents. I’d always enjoyed strumming a few cowboy chords and he was always happy to lend an ear and advice. His #1 was a refinished Tele in metallic blue which his Dad, a precision engineer, had built a palm bender for. That was the first electric guitar I ever played for any length of time. It was, alas, stolen and replaced with a chocolate brown one, which was leant to me between gigs. Upshot was, even before I ‘really’ played guitar I was a Tele fan. A hiatus in playing in a band followed as life moved on. In 1986 I joined a council run music group and decided I’d take the opportunity to give guitar another go. I needed a guitar and it had to be a Tele. The guy running the scheme went with me to Denmark street and I bought what I now know to be a MIM black logo. I still have it, Danny, the guy who went with me to buy it is still my teacher, again, after a hiatus as life moved on. I’ve had, and still have, several guitars but, it’s the Teles I’m drawn to. The guitar I built from scratch, using wood from an old door for the body, may have a sneak from a Strat rip off, twin humbuckers and a bespoke stainless steel bridge, but it was fashioned from a paper pattern made from drawing round my MIM Tele.

I bought the Buck Owens live in Carnegie Hall record & fell in love with the guitar sound. Took a while to discover what it was & a little longer to fund the change from SG to Tele.
In short Buck & Don we’re to blame

I'm an Eighties kid on the countryside edge of the suburbs. Teles were associated with Springsteen. We all thought Van Halen and his DIY guitars were way cooler. Then I grew up and got into guitar-heavy country, which meant tele. And it's been DIY tele ever since, couldn't be happier.

Probably back in 2010 or so.
I was new to the guitar forums world and I was just starting having a realy job with a salary. I went crazy and bought many guitars, pedals, amps... You know the deal.

The PRS DGT was THE thing at that time and I bought a used one for way to much money. After a couple of weeks a realised that PRS wasn't for me. A nice older men offered me a AVRI 52 + cash in trade.

I wasn't sure but I told myself that a Fender is probably easier to sell on the used market than a "higher ends" guitar like a PRS.

Said yes, and falled in love with it so much. I was in a punk band and this thing was perfect. Solid as a rock, always in tune, easy to operate and fix if needed.

Sold it a couple years ago and miss it still then.

It was not country music for me.

Around the turn of the century I was playing my Strat in a funk/r&b/jazz standard/dinner music band. My Strat always sounded like a Strat, if you know what I mean, and I got tired of it. I always loved the sounds that Prince got from his "Tele" so I bought a MIM Standard Tele. That Tele was perfect for what I was doing, and for almost everything else. It was the first of seven (so far) Teles I've owned and I've never looked back!

After decades of not having one, I decided to buy an electric guitar. Went to the local guitar mega-store, picked a Tele off the wall and played a few chords unplugged. Took to the counter and bought it. Very random. Weird thing is, Tele's weren't even really on my radar. I thought I'd be coming home with Strat. I think the simplicity of the Telecaster appealed to me. I truly didn't want to over-analyze it. It's been great.

Disclaimer: More recently, I've bought a double-humbucker guitar. Definitely does things on the dirty end that a Tele can't do as well (without pedals or a suitable amp, at least), and the split-coil settings on the clean side are all I'd ever really need. If I had to keep just one, it probably wouldn't be the Tele. I very much like the lower noise floor on the humbucker guitar.
Last edited: Oct 26, 2022

I was shopping for a new guitar in 1986, when being paid was still a novelty to the young graduate that I was, and the one I liked best in Denmark Street was a Fender MIJ Contemporary Tele. Which kind of isn’t like a Tele, it’s more a Super Strat with a Tele-shaped body… but it got me in the club I suppose.
20 years or so later I traded in the Contemporary Tele to buy a Line 6 Variax 600, and spent a few years using its models of many classic guitars. But I found that more and more often I ended up using the Telecaster (“T-Model”) settings, appreciating its bite & clarity, so when I started looking for another guitar a few years ago it was time to buy a Tele again, a “real” one this time: an American Elite in Mystic Black, now also joined by an American Original in Lake Placid Blue.
You must log in or register to reply here.

Doing "Color Over Color", or "Multi-layer" Color Finish Without Relic'ing It