Now for the rest of the story.
(All picture placed at the end.)

I bought my 1998 Gibson CL-30 as new old stock in September 2002. It's been my primary acoustic every since and only stays at home if I'm going to a bonfire, picnic on a hot day, in the sand at the beach, etc.

Over the last several years I've had an ongoing issue with the bridge pins lifting which causes the strings to not stay in tune, and can make playing uncomfortable as I do a lot of string muting or resting my palm just behind the bridge for finger or flat picking. About two years ago I brought the guitar to a tech on recommendation of a good friend to check it out. He basically went through a bunch of bridge pins he had in his shop and found a set that worked better. But that only lasted for two string changes and then the pins started lifting again. In hindsight, he's got a great reputation with electric guitars but I should have gone elsewhere for the acoustic.

The couple of well regarded acoustic luthiers near me have a waiting list at the moment, and I would have to be without the guitar for possibly a couple of weeks even once my slot opened up for them to work on it. So in the meantime I decided to try out the Power Pins from Bigrock Innovations (http://powerpins.net/). A simple explanation is that these change a traditional acoustic bridge into a top loading bridge using metal inserts into the bridge pin holes.

Installation: Not too difficult to install although my hand needed a rest at times from being contorted into the sound hole to line up and tighten down the Power Pins. I'd hate to have to do this on a guitar with a smaller sound hole. But, the process itself was easy; just tight access. And there is no question that replacing strings will be much easier in the future. That may not be a big deal if replacing a whole set but would come in handy if just replacing a single broken string in the middle of playing.

Sound: Well since I replaced five month old strings with new strings at the same time as replacing the bridge pins it's hard to say exactly. But it seems like there is a bit more zing to the top end. Kind of like turning up the Presence control on an amp where you don't lose the bass or mid range but get a little more sparkle throughout. I do tend to keep my strings on the guitar longer than some people would - I like the mellowness of older strings so long as they stay in tune. If I think about it, maybe I'll come back here and update my impressions after a few months. So far I've played a couple hours at home and did a four song set at an open mic on Monday night. Tuning has remained spot on after the first day.

Playability: It feels as though there is less tension on the strings. This is likely due to reduced break angle over the saddle. There are some reviews complaining that the reduced angle caused problems on some guitars, and some not even able to use the Power Pins due to the saddle height being very low to being with. I can definitely see how that could be a problem in some instances. But it's not an issue on my Gibson. There are no buzzes or string moving over the saddle. And I enjoy strumming the heck out of my guitars. Using a capo has actually resulted in less need to tweak the tuning all the way up to the 7th fret. Intonation has not changed at all.

Final Impression: For the reasons that I tried the Power Pins, I am very satisfied. Maybe someplace down the line I'll have a luthier look at the guitar about doing a proper fix. But for now and the foreseeable future the Power Pins are doing the job for me. There is some marketing copy and reviews that say the Power Pins improve the sound of a guitar. Do they? I'm guessing that would depend on the particular guitar and personal taste. It would be interesting to try these on my inexpensive Seagull but that's way more hassle than I'll ever go through.

Now if they only didn't look so dang ugly on my guitar.

Guitar strung up with PowerPins installed. I got gold because it has gold tuning pegs. Maybe black would have been a tiny bit more subtle. 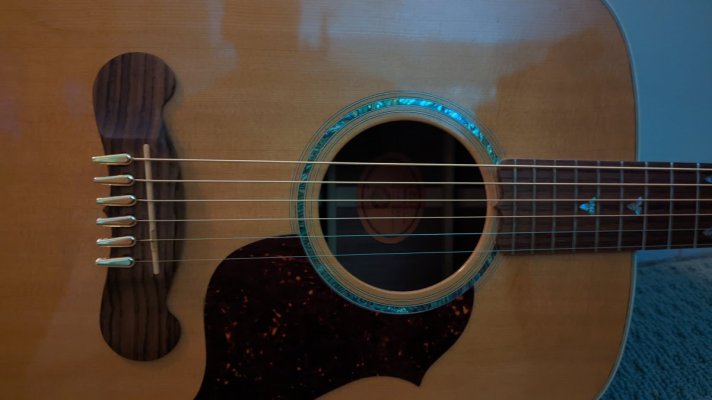 Lifting up of bridge pins. Low E was the worst offender but A and B also have problems. D is just starting to show the issue, too. 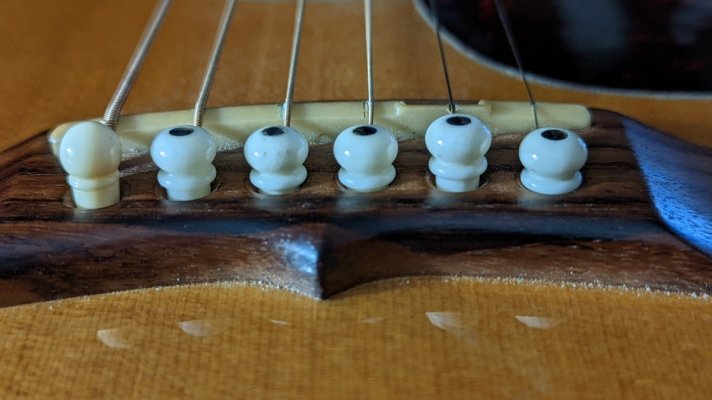 The underside of the bridge plate before removing strings. You can clearly see the issue here (Low E on the right). This is why I am unhappy with the guitar tech who looked at the guitar two years ago. Since he missed this, I'm glad I didn't ask him to do any additional work on the instrument. Looking at this, I wonder if non-slotted pins would help but that would likely still be a temporary solution.

Underside of the bridge plate with strings removed. Notice that there is a slight curve to the holes from underneath but they are in a straight line from the top. That's just how Gibson made it, and probably on purpose. I just found it interesting.

The underside of the Power Pins after install. The plate helps protect the wooden bridge plate. There are multiple washers with the kit to adjust for different total thicknesses of different guitars. 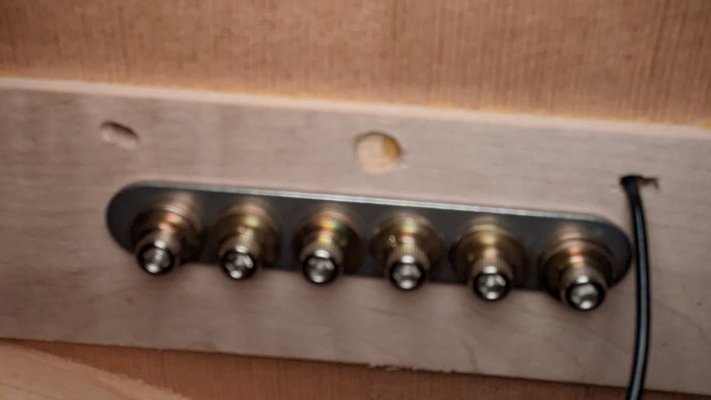 And the pins from the top side after installation. They might not look so terrible on a straight sided bridge but OMG! do they stick out like six sore thumbs on my curved moustache bridge. 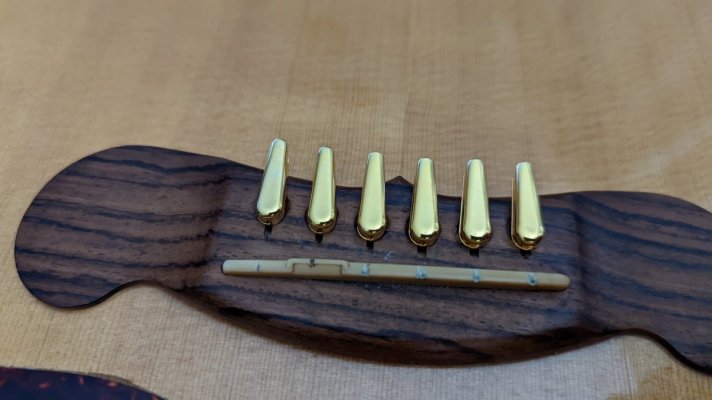 Acoustic Guitar magazine did a review of these with their Seagull S6 a few years back so I bought a set for my Seagull S12 (with 6 strings on it). I had made a new nut for the 6 strings and purchased a Taylor-style Tusq saddle.
I had the same problem: bridge pins popping up.
I think the Power Pins increase the volume and sustain but maybe I'm being subjective. However, they solved my 'popping bridge pins' problem.

Fixing that bridge plate is a simple and relatively inexpensive job for any decent acoustic guitar repairman. I’d find one and make an appointment for when he’ll have time to work on it and get on his schedule.

Not sure I could deal with the aesthetics of those. I also would be concerned about the direction of the force from the string tension on the top of the guitar.

There is a brass plate to put under there for the worn out wood. It works great. Called a Plate Mate. I catches the string ball end reliably in a slot, so the pressure is not on the pin itself. Available in various string spacings. 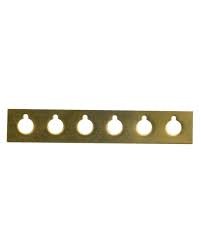 "Power Pins" appeared a few years ago then kind of went away. Brass pins and the plate that Schmee shows have also been around for a while - people like them or not. I happen to be one of those people who feels that reducing the mass of the bridge assembly is a good thing, that has been debated to death and I'm not going to start here, but adding a lot of metal mass to my bridges is not necessarily something I want to do.

On all of my guitar I simply use good quality plastic or bone pins, properly fitted to the holes (there are different sizes and tapers of pins, choose the correct ones). I make it a point to slot my bridges so the pin sits against the bridge plate and the pin simply applies a little side force to hold it in.

This is also the kind of modification that would respond to taking sound spectrums before and after to confirm what you think you are hearing - often that is a bit of a surprise.

schmee said:
There is a brass plate to put under there for the worn out wood. It works great. Called a Plate Mate. I catches the string ball end reliably in a slot, so the pressure is not on the pin itself. Available in various string spacings.
View attachment 1009753
Click to expand...

as it was basically a 'cheap fix for a cheap Martin' ( my words/understanding) vs. replacing my chewed up bridge plate with a new one.

I have always changed strings more often than probably needed, and from 2000-2004 ( playing this Martin in more of a Rock band situation), went back and forth between Medium and Light gauge string changes ( trying for more acoustic volume- funny, lights worked better!),
and this may have been rough on bridge plate...

Anyway, all good now, and ONLY going with Lights ( for both guitar and my poor fingertips- always on fire!)

Wish I had known about the Bridge Plate Mate. That seems like a simpler & better solution. I'll partly blame the guitar tech who had looked at the pin issue for not having correctly diagnosed the problem. Somebody who understood what the real problem was may have also been familiar with the Plate Mate. But at this point I see no reason to change.

The guitar with the Power Pins plays just fine. It now stays in tune which it wasn't doing with the slipping bridge pins.

There was a little adjustment to make for the feel of the new pins on the palm of my hand. I do a lot of palm muting and will rest my palm on the pins when doing some types of fingerpicking. The Power Pins are both lower and smoother than traditional pins so it took some playing time to find the anchor spot for my palm. But that's all figured out now and I don't notice anything when switching back and forth between the Gibson with Power Pins and Seagull with traditional pins.

I still think the playability improved a little bit possibly by lowering the string tension. But I know that is not quantifiable in any way. But I can definitely say that the playability, feel, and action were in no way hurt by the Power Pins. I now think my original impression that the tone had more presence was mostly due to the new strings. The guitar still feels and sounds like the same guitar I've been playing for over twenty years.

I haven't had to rechange any strings at this point but I have no doubt that will be easier, especially if just one breaks during a playing session.

When I look at your moustache bridge I see this. Perfect Strings for all mahogany gtrs! (Not retros).