and wish to share? Our family history suggest that Francisco Beltron was related. 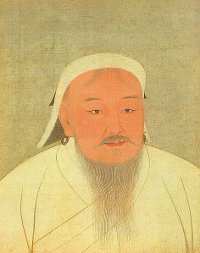 1 in 200 Men are Direct Descendants of Genghis Khan

When I was a kid we lived next door to my dad's parents (and my dad's brother and his family on the other side of them). One day I was out with my dad, brother and cousin and my mom was home alone.

When we got home the cops were there and my mom was sitting on the porch, crying and shaken.

Apparently some guys had robbed some place nearby and were jumping fences and cutting through people's back yards to try and get away/hide from the cops. My mom was doing something in the kitchen and saw a pair of legs dangling from the back patio's roof. One guy jumped down and hid in an outdoor laundry room/shack we had. I guess my mom called my grandparents' house next door, because my grandpa came over.

Now, for a long time I remembered the story as my grandpa holding the guy at gunpoint till the cops arrived. Later on I "remember" learning that he "actually" held him at machete-point. Pretty badass, if you ask me.

Until recently I was having lunch with my older cousin (who lived with those grandparents at the time), and he hipped me to the fact that no, grandpa actually held the guy at hammer-point.

As an old man. With the cancer that eventually killed him. In the midst of chemo or radiation or whatever he was doing at the time.

So yeah, my grandpa.

Oliver Cromwell on my mother's side, her dad was Oliver d: 1946

No individuals that I know of, but a bunch of my family were Os Confederados -- southern enslavers who decamped to Brazil after losing the Civil War.

Given some of my few extended family members that I know well, and others who are
long since estranged and not discussed, it's hard to imagine that
there's not somebody infamous on the family tree. I haven't set out on any
genealogical research, it's just a feeling. In my small hometown, many shared our name
but were generally warned to stay away from one another. This is the way it was as
long as I can remember.

None of my family that I know. But friends Mark and Scott, brothers, are descendants of this guys family.......

Best I can do is 15th President James Buchanan, quite possibly the only politician ever to retire from politics for utterly failing to keep his campaign promises...at least according to some history I've read.

Killed in a shootout with police in 1999 where he murdered one policeman and severely injured a bystander.

They're related to me. Not the other way around.

Wild Bill Hickok by marriage, supposedly, on my father's side, although I've seen zero to back this up. Related to but not descended from "Uncle Tom's Cabin" author Harriet Beecher Stowe on my mother's side. Apparently, her family was quiet renowned in her day and she was considered the least of them. I have confirmed that I have Beecher ancestors, but I haven't tried to connect any dots to famous ones. My ancestors are also supposed to have been involved in the Underground Railroad.

My wife's great uncle Al Zimbalist made some of the worst movies of all time, including "Robot Monster," and they're supposed to be related to Sam Zimbalist, who won a posthumous Oscar for "Ben-Hur," which makes sense considering the path Al took into the biz. I've heard talk of them being related to Efrem Sr. and Jr. and Stephanie, but when I researched what they understood to be the family ties, it didn't add up.

Not me, but I worked with a guy whose stepfather's brother was country singer Billy Walker, who had a number one country hit in 1962 with the song Charlie's Shoes.

PS. Oops, edited to say I misread the topic; I thought it was famous, not infamous. Billy Walker is not infamous!
Last edited: Sep 28, 2022

I've been unable to validate it, but allegedly my great grandfather was part of a gang of bank robbers around the depression era.

Seems like something I should be able to prove, but so far just word of mouth and can't find records....

My grandfather on my mom's side had a wild story. Apparently he roamed around the west as a youth in the early 20th century, did time for grand theft auto in Reno in the late 30s and was wanted for bank robbery in Idaho. He reinvented himself, took a new name and identity, moved to the Oregon coast, became a part time preacher, and married my grandma, who either never knew any of this, or did and took it to her grave. He died 45 years ago - I never knew him - and my grandma died 20 years ago. My brother discovered it all, down to the mugshots, doing family history research a while back.

I didn't find out about this guy until I was doing some genealogical research a few years ago. That side of the family never talked about my black sheep of a great-great uncle.

The History Guy on YouTube did an episode on his involvement in a Kentucky feud where he murdered a lawyer on the steps of the Breathitt County courthouse.

There's even a folk song about the incident.

After being convicted of murder in a second trial and sentenced to life in prison, he was given parole after about 20 years, perhaps in exchange for his silence instead of implicating connected and powerful people. He went on to become a lay preacher and farmer after his release.

On my dad's side we're related to Daniel Boone and Sam Bass (so I guess that's a zero sum karma offset).
I don't know exactly how I'm related but we did have big Boone/Bass/Bricker reunions up until the early '90s when the older generation began dying off.
Supposedly related to John Wesley Hardin on my mom's side but I've never seen any proof of that.
My mother's uncle Scott Yancey tried to rob a train back in the '20s. It embarrassed the family so badly that my grandfather dropped the 'e' in his name and our whole branch has been Yancy ever since.
Ironically, those two brothers ended up resting side by side with their different spellings on their stones.
(Sorry for typing so much)
You must log in or register to reply here.

B
What Have You Narrowly Avoided Buying Guitar-Related In The Past 48 Hours?
2