Tim Pierce on his YouTube channel talked a while back about the problem in a studio when you decide to swap the guitar you used for the last hour for another one you brought with you - the recording guys look at each other, twitch, and your credibility tanks. Live playing I'm getting that same vibe. I'm finding it hard to swap guitars. I'm playing one Telecaster - every job - every song. I love that Tele sound and vibe. I can't see what else I need.

Am I in dangerous reverse GAS syndrome as I look at the three guitars I could cash in?

AAArrrggghh! You are soooo right - I've already got an irrational hunger for an AC30

This is absolutely the right answer.
D

I get it. You find one or two you really like and the rest of them just don't matter. Declutter and let someone else who might play one of your guitars play it.

I love this video, and Keith’s general philosophy:

In my book, minimalism rocks. YMMV.

Oh yes - that vid is so true. I've earned some good money from the spare stuff I have now - should let someone else pick it up and use it for jobs.

More is not better. You only need one. Two if you’re serious. Any more than that is luxury. We are all very spoiled and lucky.

I enjoy selling more than buying, actually. I don’t feel the need to own lots of stuff. But I do like trying out lots of stuff. So the merry-go-round keeps turning…

Marc Morfei said:
More is not better. You only need one. Two if you’re serious. Any more than that is luxury. We are all very spoiled and lucky.

I enjoy selling more than buying, actually. I don’t feel the need to own lots of stuff. But I do like trying out lots of stuff. So the merry-go-round keeps turning…
Click to expand...

I take a back up guitar to gigs incase a string breaks. It happened a while back, so I was glad to have another to grab: I'd played the intro to Cocaine and it snapped just as the vocals came in. I grabbed my back up (Cabronita that night) and was playing again before I needed to start the solo.

I do agree that we are very spoiled and lucky to have so many guitars, amps, etc as many of us do on forums like this. I'm actively trying to reduce my collection as I've realised that it's grown due to wanting to try things out and being able to afford them when I was working full time. Now I'm looking to semi-retire it's harder to justify so many when I only play certain ones.

My only issue is sentimental attachment: A Japanese Vintage Squier Strat I've owned since 1982 and an Epiphone Les Paul since 1995. Both were birthday presents, not worth huge amounts but I don't tend to take them out as I'd hate to risk losing either one. I also have a limited edition red Rickenbacker I bought when my Dad passed away from some of the inheritance.

If I ignore those, then maybe I could thin the rest out more easily, but since some are Partscasters they are worth very little, maybe a bit more if I part them out. That'll probably happen to my avatar guitar as the neck is on my main Tele now, so I ought to sell that off as a loaded body or each piece sold separately. I keep thinking I could put a neck humbucker on it that I have in my spares box, but then I don't really need three Teles: I have a standard SS White Blonde and the Cabronita I built more recently (also due to a spare pair of pickups I already had!!), I've got the LP if I want to play something with a PAF style neck humbucker.

Current plan is to sell my Gretsch, Les Paul Junior (sounds too similar to the Gold Top on the bridge as I fell for the 'single pickup' coolaid), maybe the SG as the LP covers the PAF sound.

I took this picture over Christmas as a reminder of my excesses in years to come: 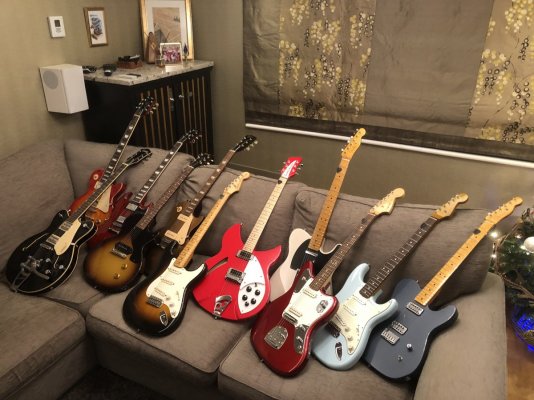 I use the self built Blue Strat for gigging, with one of the three 'Fenders' as back up. To be honest I don't really need the Jaguar or Cabronita, but both are effectively Partscasters (the Jag was a 3 tone SB Player originally before I sprayed it CAR).

I'm clearing out amps and pedals too: I use a Marshall SC20 combo with the band, plus a back up Orange Stamp just incase. I have a really nice Fender '64 Custom Deluxe reverb that I waited 40 years to get after playing a BF Twin and wanted something similar, but lighter. Really I don't need the other Marshall Studio heads I have and associated cabs. I could probably justify keeping a Champ clone because it's worth next to nothing and I do take it to open mics as it's loud enough for those and easy to carry.

I often wonder how good I'd be at playing if I'd stuck with only having that JV Strat. It was my only guitar for 13 years and I did manage fine, plus one amp and literally a couple of pedals.

It's so easy to get drawn into buying more and more stuff thinking it will make you a better player, or the old standby; 'It takes me in another direction, so I feel inspired' . Truth is that if we can afford it, then we get a rush out of buying something new and have a period of playing nothing else but the new one. I should really just cycle round what I'll have left once I sell some off, but I wonder if I'll get sucked back into buying again at some point...

KelvinS1965 said:
My only issue is sentimental attachment
Click to expand...

These are the ones you keep.... sell em and you'll likely regret it almost immediately BTW - Noice collection man!!! Wowzers!

What is this selling / getting rid of thing you speak of? I've never experienced it.

I hear you. Although I have a lot of gear I would like to have for the fun of it I have to be honest: researching, finding and getting to know new gear is mostly only a distraction from what really matters: improving skills and making music.

One eye-opener for me was a recent interview I heard with Tom Morrello, where he said something like: "I'm not really a gear head. I've been basically using the same guitar and 5-6 pedals for 20 years, and my setup still inspires me to come up with new ideas and songs. So why would I want to change that?"

That is a great insight I think.

Telekarster said:
These are the ones you keep.... sell em and you'll likely regret it almost immediately BTW - Noice collection man!!! Wowzers!
Click to expand...

Yes, that's why I said to ignore them; I meant in terms of ones I could get rid of.

It is a nice collection, but I do feel guilty as some of them don't get played much. I remember thinking I'd hit the peak when I bought a cheap Affinity Tele when I was 40. That took me to three guitars; Strat, LP and the Tele.

There’s nothing wrong with minimalism, but I worked hard and made a lot of sacrifices to get to the point where I can afford some luxuries; I don’t think there is anything wrong with that either.

If someone buys a nice picture or sculpture and they just look at it, no one blinks an eye. A guy spends 10-15 hours a week during the summer to have a nice yard, no one thinks twice. But own a guitar “just because” and some people have a problem. I make no apologies for owning nice guitars that I never play. Call Me Al said:
I love this video, and Keith’s general philosophy:

Except for every other video of his that followed discussing the new gear he gets . . .

I discussed the “change your guitar for every song” concept I witnessed at a recent concert with some non-musician viewers
they were not bothered by it, and considered it part of the theatrical aspect of the show
I consider it a distraction that should only be tolerated when necessary - electric to acoustic or 6-string to 12-string

There's no doubt you can get different tones with different guitars. Hard to make my Tele quack like a Strat... A hollow body will give an other coloring.....

But with the proliferation of fx and modeling amps it's less of an issue.

I don't gig so don't require multiple voicing's that I can't get via a few pedals.

I have a 70th Ann. CS Broadcaster and a Collings D1A...those two cost me close to $9K and well beyond what I deserve, but have me covered musically!

I've owned up to 5 at once and probably 30+ guitars in my lifetime. The two I have now are the best! No regrets on those traded or sold....

When I had more guitars than I needed, it just hit me when I bought guitar strings. Why am I buying and changing steings for guitars that I rarely play? So I kept only the ones I needed, and sold everything else.
You must log in or register to reply here.