Wow! How much did that cost?

unixfish said:
Wow! How much did that cost?
Click to expand...

Billy3 said:
Absolutely my friend. I just find it such a scam that people are paying more for a single pick than a few sets of great strings. I will never get my head around that. I learned guitar with my fingers. Love fingerstyle. Have tons of picks. I think I play with so many that I love them all. Depending on what I play. Like you said. It's personal.But that's Just me. BTW thanks for your wiring diagrams. They are awesome. Your knowledge is greatly appreciated in my book. Thank you. I think I will practice right now. Keep on picking.
Click to expand...

Not a scam at all. Almost ten years ago when I bought my first one, I read in one of the acoustic forums that the vespel that Blue Chip picks are made from cost $120 a square foot then. BTW, the price of BC picks has stayed the same forever and I still have and use that original pick.

It's kind of ironic that this thread showed up in an electric guitar forum because most electric players (me included) use picks that are < 1mm thick. Electric strings are so light and flexible that a thick pick isn't necessary to get the strings moving. Where BC picks make a huge difference is on acoustic guitar. You have heavier strings with more mass and higher tension and they need to be driven hard enough to get the big spruce top moving. Serious flatpickers usually prefer picks in the 1.4mm/0.055" and up thicknesses. Blue Chip is part of a quest to find a durable synthetic substitute for real tortoise shell which is considered to be the gold standard for tone. Real TS picks are still used by some traditionalist professionals but is expensive, probably $100 a pick by now, and wears pretty fast. Amongst hard core acoustic players (people who play guitars the cost $5000-$40,000) Blue Chip is considered to be the closest competitor to TS in tone and their speed bevel makes for a more effortless glide. Very few who've tried them have reported back unimpressed. The majority are converts.

So it's really about context. Electric and acoustic guitars are in different universes with the different demands and needs. When you spend 10x as much for an excellent acoustic, a $35 pick to make the magic happen is minor.

100% agree with everything @telepraise says above. I still use ultex and jazztone on my electrics because it doesnt really matter. for acoustic, i need the noise-less tone and control that the blue chip provides.

I don't have any issues with different picks other than their effect on sound. Currently, Jazz III Tortex @ 1mm is my goto. Dropping a pick is a rare occurrence, maybe once a year, if that.

telepraise said:
Electric and acoustic guitars are in different universes with the different demands and needs.
Click to expand...

I agree with this, but it doesn't dismiss Blue Chip picks from electrics. (Or Red Bear, V-Pick, etc. as you might choose.) They sound and feel splendid on electrics, although generally you'll want the lighter ones.
L

P Thought said:
I agree with this, but it doesn't dismiss Blue Chip picks from electrics. (Or Red Bear, V-Pick, etc. as you might choose.) They sound and feel splendid on electrics, although generally you'll want the lighter ones.
Click to expand...

If they made a .73 I'd give one a shot. I've spent money on far worse stuff than a pick My gauge on electric keeps getting lighter so the Blue CHip is heading down the wrong path. From all the stories I've read, it will last forever.

LaMarr-Bruister said:
If they made a .73 I'd give one a shot
Click to expand...

The TD35 is pretty thin, and it's very stiff, so you can lighten 'way up on your touch. But I understand about preferences; I have them too.

As long as you don’t lose it over the long run the price is fine. I could see drilling a hole in the top so you could put it on a key ring or necklace…

LaMarr-Bruister said:
If they made a .73 I'd give one a shot. I've spent money on far worse stuff than a pick My gauge on electric keeps getting lighter so the Blue CHip is heading down the wrong path. From all the stories I've read, it will last forever.
Click to expand...

I've always played thin, snappy picks. Anything thicker than about .7mm seems dull and dark. I held off trying Blue Chip for a couple years because I assumed I'd hate them. When I did buy, I got the thinnest they make, the 35, which is .89mm. Oddly, it seems neither snappy nor dark and dull. In fact, the whole internal discussion seems to have left me.

I also play some fingerstyle, mostly acoustic blues / rags. When I'm playing with my fingers, I don't think about them. The fingers. They just ARE. It's not like hybrid picking where I'm concerned about fake nails. For fingerstyle, my fingers just work.

Well, the BC is similar. They feel like natural extensions of my fingers. I don't consciously hold them. They stay put for as long as I'm playing. The tone? I don't think they have a tone, not like other picks, where the 'tone' is often an articact of the pick, like a >zing< from the edge of the material against the string.

P Thought said:
I put my real tortoise pick somewhere so safe that I haven't seen it since. . . .
Click to expand...

I found it! This thing's been gone three or four years now I think. I'm putting it back where it belongs, in the key-fob pouch I keep always in my pocket when my keys aren't in the ignition. I have one and it's awesome. BUT
the difference between it and a Jim Dunlop Primetone is so negligible that it's in NO WAY worth the money, considering that, like any guitar pick, one mishap with the vacuum cleaner and it's gone I have tried them, for me, meh

I have been a Dunlop Tortex fanboy for as long as I can remember. Recently bought my first JHS pedal and they throw in a Gravity pick with every pedal. These are Standard, 1.5. Not sure what Gravity puts in these things, but I am hooked Any medium pick works for me. Not to picky

060 or 073 tortex are good.
I also have a couple of blue Fender mediums, great for playing blues~

I'm getting up in years, so now I use picks that have a gripper surface on the part of the pick that one's finger hold onto. I play guitar now for both muscle memory and for fun.

P Thought said:
I found it! This thing's been gone three or four years now I think. I'm putting it back where it belongs, in the key-fob pouch I keep always in my pocket when my keys aren't in the ignition.

That keyboard is an environmental hazard

notmyusualuserid said:
That keyboard is an environmental hazard
Click to expand...

moosie said:
A Fender Extra Heavy that I have in the bottom of my pick box measures .044" thick. 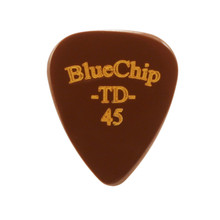 Finally bit the bullet and ordered one of these, got it yesterday. While it's the same thickness its quite a bit larger than my Fender extra heavy. Here's the thing though, it doesn't feel like it at all. It's more comfortable and my picking is faster, smoother, and more efficient. Definitely feels like its going to last longer than my Fenders usually do, which is about 2-3 weeks if im lucky. Tone wise, the Blue Chip has more crispness and clarity but not in a brittle or overly bright "picky" way. Call me a convert!
You must log in or register to reply here.
Share:
Reddit Pinterest Tumblr WhatsApp Email Share Link