If you want 'em. You gotta make it happen. Killing Floor said:
Do your current guitars have cases or gig bags? If so there is always an empty case. So you need to rethink not wanting another guitar. Wanting stuff is GAS and that is what our atmosphere is made of. Look it up.
Click to expand...

that is what our atmosmear is made of.

How did you manage to get 50 guitars without one having p90s?

Given that data point, I agree with the others that suggest selling one. Hell, sell 40 of them.
W

I have a Squier Bullet Tele HS that I put a GFS Dream 90 (HB sized p90) in the bridge of and covered the neck rout with an Esquire pickguard. It's pretty much my favorite guitar these days. SD Phat Cat is a similarly configured pickup. I'd be eyeing up that Squier for a similar mod.

Bootstrap offers P90s designed to fit HB routs. I have one in the neck of one of my partscasters, and I can tell you they sound Grrrrrrreat! They offer a hot and regular P90 (I have the hot one). And a set of matched neck and bridge P90s will cost you $60. Plus they're handmade in a garage in Ohio. There's lots of love for Bootstrap here on the forum, and their customer service is great as well. From the Bootstrap website: Our HB-90 Means rock ALNICO 5 poles with a modern overwind to deliver the raw grit of an overwound P90 tone. Each bobbin is CNC cut from Forbon® vulcanized fiber, and precisely wound in our small Ohio shop.

Check out those brushed Corian® custom covers. They're milled and finished in-shop for a look you can't get anywhere else! And unlike cheap chrome or nickle-plated brass covers, Corian® is signal-transparent and won't dampen your tone.

Also - I had a SD Phat Cat in this same guitar, and I really prefer the Bootstrap P90.

NoTeleBob said:
I'm in the "if you want P90's, you want real P90's" survey group. Anything else doesn't have the voice.

Believe it or not, Epiphone P90's are fabulous. Try some out at a local guitar store. Play rolled back to 8, then full out and with a little gain. Fabulous. Very inexpensive used and very nice sound if you plan to do a conversion of a guitar you own.

If you really have 50 guitars and none with P90's, you should part with something else. There has to be some redundancy in there you don't need. Otherwise, the options are above.
Click to expand... 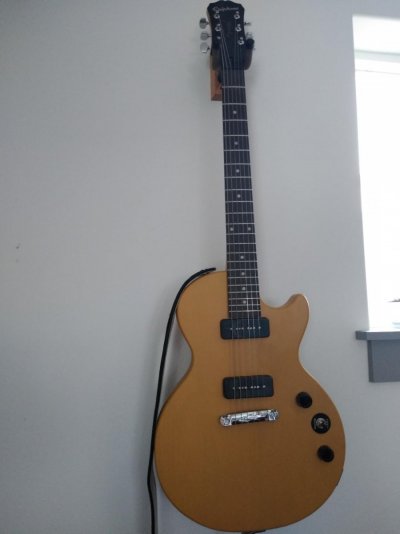 That is the best tone to fun to dollars ratio out there, really. Sell that Tele you want to convert and buy the real thing. But be warned ... you'll then want more guitars with P90 magic.

DON'T go for the humbucker size P90ish thing. They physically can't be P90's. Not enough space at the ends of their bobbin to get a proper P90 winding. P94 (or humbucker size P90) are just overwound thin single coils and that is what they sound like. Not bad sounding at all, but not a P90. if you have a Squier on the bottom of the pecking order, more the better, not as if it's a rare guitar...

my only Squier suffered that fate as I saw it sitting sadly in the corner gathering dust.... you're it, look out....

and that feeling of putting a router bit through a perfect guitar finish , Oh yeah.. nothing like it.. now it's a killer guitar, always in the room.... it put my US guitars back in their cases for years....

Yeah if you’re 50 years old and never chopped into a guitar, buy a router and make some P-90s fit!
If you’re up to 50 guitars, maybe trade one in.

You’ll have to route it. Routing on a finished guitar is a bit scary. It’s doable of course but there’s a risk of chipping if you don’t take steps to mitigate it. You’ll have to do the PG too—by which I mean you might need to make one from scratch. P90s are longer but not as wide so depending on the bridge type you might need to modify the PG shape at the bridge end to cover the extra gap.

If that all sounds like fun, have at it, but if you just want to get from point A to point B it’s easier to swap the whole guitar. I put a dogear p90 in an epiphone junior routed for a humbucker.
the amount of material i needed to remove was small, i dont own a router.
a few passes with a dremel was all it took.
a couple of the hb mounting ring screw holes showed, i just filled them, they are only visible from up close.

i needed to make a spacer to raise my p90 closer to the strings- i couldve made it wider to hide the holes, and itd be easy enough to drop fill them or something to make them invisible, but it doesnt bother me.

It sounds like you want a “real” P-90 and not a humbucker sized one. And, you don’t mind making sawdust and getting hands dirty.

I’ve tried them all. I’m a P-90 junkie (alongside my addiction to Telecasters).

The GFS Dream-90 (a humbucker sized unit) were the worst of all that I tried.

The best of those I tried are Tonerider “Vintage” with AlNiCo II magnets. All classic P-90 tone, with the heavy drapes pulled off of the top-end. Clarity and fat mids. I think it’s the AlNiCo II mags, I’ve been turning to a lot of pickups with them to help the top end without losing body (been digging A2 magged pickups in PAF style humbuckers, too).

The problem is going to be routing longer for the P-90s while hiding the excess in the width-side routes. Humbuckers have rings to cover the cavity. P-90s have to rely on pickguards or very precise guitar body routes…

It looks like a home-cut pickguard is in your future… especially with that short Strat-style hardtail bridge.

These are the types of projects I’ve been really enjoying taking on myself (and following!) since space is also at-capacity (who am I kidding?: beyond capacity!) at my house.

Which brings me to another pickup mentioned above: I even tried the Seymour Duncan P-Rail in one guitar. It’s still in it (a Jazzmaster style Partscaster build), and I like it… for what I want from it (I even like the crappy “Strat” rail)… that said, the basically real P-90 (I activate coils using a TripleShot pickup ring) sounded similar to my factory Gibson P-90. Which is to say: a really nice and classic raw sound, except with too much treble “sheen” wiped off of the top… my problem with a lot of A5 magnet P-90s I’ve tried. The longer Fender scale length and my odd potentiometer choices brightened the P-Rail’s P-90 just enough for the overall utility of the pickup itself and selector ring to win me over. But if I was to repurpose this Caster as a P-90 only guitar, I’d go Tonerider A2.

All of every aspect of tone is subjective, so take this post with a giant grain of salt, though I hope it helps you. I’m looking forward to Before/After photos… otherwise I might give in to the hunger and start ANOTHER guitar-related project I don’t have the time or space for. Some of us are living vicariously through other’s project posts to stave off our GAS

… also, after noticing the size images posted above by DrBGood, you might be able to get away with a clean route. The width gap isn’t as dramatic as I remembered. My brains aren’t what they used to be, and they didn’t used to be good to begin with.

That matte black shielding paint stuff some people use in the pickup cavity might hide any remaining gaps from prying stage (or garage) lights… if you end up using P-90s with black covers.

Duncan Phat Cats are another great option if you don't want to route. I'm thinking of doing the same in a HH tele body.

Treat yourself and buy the guitar of your dreams. Give the Squire to a young family member or friend and let them learn to love it.
Welcome to the back Forty.

Location
The wilds of northern Colorado

Jupiter said:
Routing on a finished guitar is a bit scary.
Click to expand...

Ahhh nothing to it. Heck, I once drilled right through the body of an '81 Telecaster trying to create a pocket for a humbucker mounting screw -- it was no trouble at all. Played the guitar for years like that until it was stolen.

Now, drilling a hole on a boat hull below the waterline, that gives me the sweaty palms.

stomped box said:
Ahhh nothing to it. Heck, I once drilled right through the body of an '81 Telecaster trying to create a pocket for a humbucker mounting screw -- it was no trouble at all. Played the guitar for years like that until it was stolen.

Now, drilling a hole on a boat hull below the waterline, that gives me the sweaty palms.
Click to expand...

I can only imagine, luckily

I tried the P-94 years ago. I had high hopes for it, but it sounded nothing like a P-90 to me.
You must log in or register to reply here.