What do you recommend?

I owned a fender vibratone and loved it, but not practical for me.

The Electro Harmonix Lester G is OK. On it's own, sounds good. Doesn't stack well with drive pedals. I like the Micro Vibe for the Robin Tower stuff but not the fast stuff. Best of luck.

The Strymon Lex is the best one I've played...but it's $300.
I own a Danelectro Big Spender, it's not too bad. It does sound like a rotary effect, just not as convincing as much higher priced pedals I've tried like the Boss & Strymon.

Neo Mini or Micro nails a Leslie, but they’re not cheap. Love my Mini.

The Keeley RotoSonic is cool. Simple controls but very controllable, and three different modes from subtle to Hendrix-y super wetness.

This little Dano has a nice sound, not exactly Univibe territory but pretty cool nonetheless. I have some pedals from this series and like them alot.

The DOD FX22 Vibrothang is meant to be a rotary emulator which it does pretty well but it goes beyond that and is capable of other very interesting things. They are also pretty cheap.

That said, the issue with emulating a Leslie is that there are two different things happening - the low freqs are running thru a speaker with a a spinning drum that makes it sound more like a tremolo while the highs are running thru a spinning horn that sounds more like a vibrato. Emulating both of those things is complicated and that's why the best pedals are expensive. About a year ago I bought a Digitech RPM-1, and it does a killer job of emulating both aspects of a Leslie, but it's rack mounted so you may not want that.

I use a Pigtronix Rototron and I think it sounds pretty good. I thought these vids were helpful...

really like this one! joyo has something similar... but I keep listening to the fender pedal and it is exactly what I like (sounds wise)

I have two. The Danelectro Big Spender is a good one. 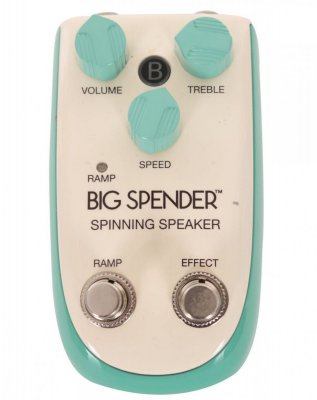 The Keeley DynoMyRoto is also good, but pricier. It has rotary, chorus and flanger settings making it good for a smaller/tighter board. 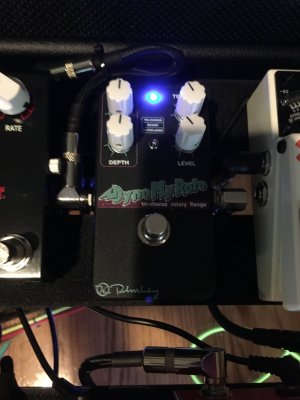 getbent said:
really like this one! joyo has something similar... but I keep listening to the fender pedal and it is exactly what I like (sounds wise)
Click to expand...

IMHO the rotary sound of the Vox Stomplab is pretty good. It's cheap but not cheap sounding. I painted mine and put a handmade faceplate on it to make it look more vintage I had one of these for a little bit. They are very solidly built pedals and it had some good sounds. I think I paid like $80 used. They are still out there getbent said:
really like this one! joyo has something similar... but I keep listening to the fender pedal and it is exactly what I like (sounds wise)
Click to expand...

The Nux Roctary is pretty darn cool. If I had seen that first...
S

It's more expensive than my Squier.
HOWEVER... If I was doing it - I'd get
myself a Ventilator.
None finer.

I like my Line 6 Tonecore Roto-Machine.
Discontinued, I see them go for around $100- $150 used.
Regular stompbox size, with lots of controls to help you get your Leslie on... I use a Boss RT-20, and so far it’s my winner. I’ve tried to match it using a TC electronic Corona chorus and writing a new TonePrint which came real close, but until I need the real estate on the board, the RT-20 is staying put.

Fulltone Dejavibe is a great-sounding pedal, not crazy cheap but sounds like a univibe -- basically because it is a univibe.
You must log in or register to reply here.

My Maxon Phaser is worth a ton. I don't want to sell it..