I Like Acoustic Amps and I Cannot Lie club

I am generally a tube amp man all the way. I gig with a Dean Markley all-tube amp that is as sweet as honey, and weighs about 50 lbs. I wanted a little portable amp to take to jam sessions and play jazz. Someone gave me a Fender Frontman 15G, which was feather-light but sounded tinny and shrill. So I was exploring other options; I know that a lot of jazz players like Roland Cubes.

But then I thought back to a moment during the 1970s -- I went to a jam session in a club, and the only amp that was open was an Acoustic. I thought to myself, "ewww, solid state," but I held my nose and plugged in. To my surprise, it sounded great -- not tubular, but very punchy and with its own kind of singing quality, different than tubes, but pleasant.

I remember during my funk-band days in the 70s that bass players used to used those Acoustic amps with the graphic EQ and crank the midrange for bad-ass bass tones. I have heard that Albert King used an Acoustic amp as well.

Fast forward to Wednesday of this week -- I checked out the little G20, and it still had that sound (even though I imagine that the company has changed ownership multiple times and the gear is completely different now.) It doesn't have much variety in tones -- I like the clean channel, all three tone controls at noon, and that's it. But for jazz, I don't need bells and whistles. And the price was right: $70.

So I grabbed it, and I'll take it to the jam session on Tuesday to see how it fares (the little Frontman was loud enough to keep up with drums, so I imagine this will do so as well.) I have not heard of jazz players that use Acoustics -- are there any out there? The other solid state amp that I will admit to having owned was a Polytone Minibrute -- they were quite fashionable among jazz players in the 1970s.
S

Mr Perch said:
Fast forward to Wednesday of this week -- I checked out the little G20, and it still had that sound (even though I imagine that the company has changed ownership multiple times and the gear is completely different now.)
Click to expand...

I have read (in this TDPRI thread, among other places) that the Acoustic brand is now owned by Bain Capital, along with Musicians friend, Guiitar Center, Music 123, et al.

Several years ago I had (and took) the opportunity to play a number of guitars through the little Acoustic B10 and B20 bass amps at the GC nearest me. (Those models have since been displaced/replaced by B15 and B30.) I was very positively impressed. Both amps were clean, quiet, and made any instrument I played through them sound very good, with only a minimum of knob-twisting. These experiences convinced me that whoever did the design work for these models was extremely competent. Reliability is still unknown to me.

I've been using an Acoustic B200H (bass head) for about 6 years. Very versatile and reliable. With the 6 band eq, gain control and notch filter I can cover a lot of ground. Through my old JBL 15 cab it's plenty loud for our normal indoor gigs. For outdoors I have used the post eq di through the p.a.

A band member has an Acoustic acoustic amp and likes it as much as his newer Roland. He can't decide which one to get rid of.

I took my little G20 to the jam session and it worked out fine, good full jazz tone. I also discovered that if I set the gain on the overdrive channel to "0", I get an acceptable blues tone.

Our favorite guitar player used an Acoustic 150 head with a 6-10 cab back in the day. Always sounded great!
J

I still have my Acoustic 150 head. It's beat but still works though the tone circuit is messed up because they stopped making a certain value inductor (so my tech said).
I used it with a Marshall 4x12 in an R&B/Funk band in the 70s and it sounded great!
Only problem was the white paint that was on the Tolex. It never would dry completely. I was told that the head was used by the Isley Brothers and they did use all white gear.
R

Bill Moore said:
Our favorite guitar player used an Acoustic 150 head with a 6-10 cab back in the day. Always sounded great!
Click to expand... I sat in with a 6 piece jazz band this week. The little G20 amp sounded nice, and I never turned it up past "5".

Of course, brands like "Acoustic" and "Kustom" are now simply recycled marketing names attached to lower-end price position amps. Which is fine.

I've got a green Crate CA15 acoustic amp that I use occasionally with my electrics. Very loud amp with real spring reverb. Seems to work best with hollow or semi-hollow bodies. Sounds best, of course, with acoustics.

I got the idea when I saw a guy playing a jazz hollow body thru one at the Jean Talon market in Montreal. I was attracted by the great tone he had. Couldn't believe my eyes when I saw it was a Crate acoustic amp just like mine.

darkwaters said:
I've got a green Crate CA15 acoustic amp that I use occasionally with my electrics.
Click to expand...

There is bound to be some confusion on this, but "Acoustic" is the brand name for a line of guitar and bass amplifiers. To my knowledge, they don't make any amps that are intended for acoustic guitars, only electrics. 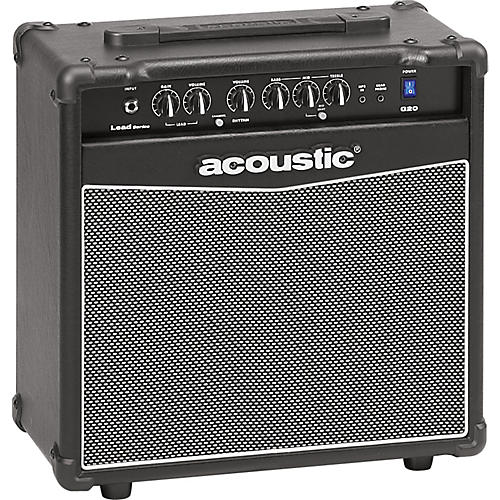 Mr Perch said:
There is bound to be some confusion on this, but "Acoustic" is the brand name for a line of guitar and bass amplifiers. To my knowledge, they don't make any amps that are intended for acoustic guitars, only electrics.

Whoops. I had no idea. Never heard of the brand before. Strange name for an electric guitar amp. Wonder what an acoustic sounds like through one. Must lead to some confusion for music stores.

I've got a 70's Acoustic 136 bass amp. I use it for both bass and guitar. It is crazy loud. It sounds very sterile by itself, but it makes a great pedal platform.
G

I've got the acoustic 125, which is a twin 12. One of the square magnet Eminence speakers needs a recone. Anybody know for sure who does this or where I could buy the kit?

Mr Perch said:
To my knowledge, they don't make any amps that are intended for acoustic guitars, only electrics.
Click to expand...

Acoustic does make an acoustic guitar amp. Model A20, it's a little 20 watt wedge shaped thing. I mentioned earlier that a band mate had one and liked it. He has moved it on in favor of his Roland. Just wouldn't stand up to band volume.
D

Hey all, I thought that I'd chime in and add some $0.02 worth of opinion to an old(er) thread.
About two month ago, I picked up one of the Acoustic G20 amps after eyeing it for quite a while. Plugged it in at the local GC, played on it and really enjoyed the tone it put out for me. It sounded great on both clean and lead channels. Since taking it home, I have really enjoyed the amp a lot... Would have been "enjoying" it more if I'd gotten it when it was $50 at MF, and if it had reverb ;-). Anyway, when I got it home, the first thing I did was a speaker swap. I had an 8ohm, Celestion G10-Vintage just sitting around and wanted something to put it into. I didn't do the swap because the original speaker sounded bad or anything, just wanted the Celestion in something other than the box I bought it in. I really like the amp with this speaker... hell, I really like the speaker! But, the match was not to be a long lasting one. About one month ago, I purchased a Jensen Jet Falcon 10" after listening to the sample on the Jensen web site, and swapped speakers again. I really think that this combo with the Jensen speaker is a fantastic combination! I do like the Jensen lots and lots, and it's much less expensive than the Celestions...
I just wanted to share my thought and opinions. Thanks.

I got a g35fx a couple of months ago, and I've liked it. I really like the fact it has a 12" speaker, especially after only having a Pignose (6" speaker) as my only amp for so long. Got it for $99 at Music & Arts, but started kicking myself when I got home as they also had the 100-watt version for $149 which has footswitchable channels and effects. That said, the 35 sounds great with my Tele and SG, and it worked great outdoors when I led a folksong singalong with our local community chorus.

I had a Acoustic G 60 in the early eighties that I used with a Dyna comp and a original tube screamer. I got a pretty smooth sound out of it for a solid state rig and it was plenty loud. I replaced it with a Ampeg B25 Bass head and a 2x12 cab. Now that was a loud amp!
You must log in or register to reply here.
Share:
Reddit Pinterest Tumblr WhatsApp Email Share Link