I guess my Charvel is officially cool now

As for cool, @Lynxtrap, Joe Walsh and Keith Richards own all the cool in the world. If Joe plays it, it's cool.

And as for Joe, I've seen him playing a dozen different guitars and amps. Always sounds like Joe. That says something about chasing tone.

I have to admit that even though I don't think that Charvels or Jacksons are uncool, I've never really had a desire for one.

Really the only exception I can recall is Jake E. Lee's white Charvel Strat. I think that's because I probably have just always liked white Strats with black pickguards. But I guess in retrospect, it was cool to see a hardtail Strat like that, and something about the neck and middle pickups being reverse-angled just kind of looked cool to teenage me.

Probably more what knocked my socks off in the 80's were the 'slightly updated' Strat themes, like my '85 Ibanez Roadstar II. The necks on such guitars were still very much like older Fenders, just with 22 frets, a 12" radius, and smooth sealed tuners. I actually liked Strat-like stuff with non-locking trems, and that's also what that Ibanez had...

...I also recall playing an ESP SSS Strat-like thing with a non-locking trem in around '86 or '87, that was really cool. I want to say that it was marketed as being something Hendrix-like, which was weird, because it was like all or mostly black. All I know is it played and sounded like a dream, but I couldn't afford it.

What I wish I could get over is the slimmed down upper horn of the 80's Kramer Strat'ish things, because I'd probably get one of the current production variants of it. It looked so normal in the 80's, but just looks so goofy to me now.

I also think I really need to give a Dinky a go. I built a partscaster with a 'not 100% sized' Strat body fairly recently, and the body is like super lightweight basswood. It's so easy to play that it's ridiculous, and I can play it all night long w/o any fatigue.

Anyway, about those Floyds - how long does it actually take to change the strings on a guitar with one?

Midgetje94 said:
Define modern country. Lol pop country? Not my thing. But there’s a LOT of modern guys kicking GREAT country. A Dallas buddy of mine is on a 2 month tour of Europe playing country (Joshua Ray Walker). But there’s tons more. Hit up “Gems on VHS” on YouTube. I found Lost Dog Street Band through them.
Click to expand...

A lot of good honest music there man

I don't think I'll ever think of Charvels as cool, necessarily, but they're sure fun to play. The flat board, low action and hot pickups...always a good time.

The troll in me states that I would bring the opposite of what was expected for
the genre I would be playing.
A

11 Gauge said:
I also think I really need to give a Dinky a go. I built a partscaster with a 'not 100% sized' Strat body fairly recently, and the body is like super lightweight basswood. It's so easy to play that it's ridiculous, and I can play it all night long w/o any fatigue.

Anyway, about those Floyds - how long does it actually take to change the strings on a guitar with one?
Click to expand...

I recently picked up a dinky, mainly because I had an unfulfilled craving for the Charvel model 3 that I nearly bought in the 80s, and have regretted not buying ever since… but, I’ve found that it’s very forgiving on my arthritic shoulder and hands, and play it a lot more than I expected.

There’s no getting around the fact that stringing a Floyd is a pain in the wherever, but, it doesn’t take a lot longer than a regular guitar - about 20-30 mins with string stretching and tuning: it’s a lot easier if you change the strings one at a time, rather than taking them all off and blocking the trem (still put something behind the trem, even if you’re changing one, though).

I'd play a Charvel. But just this one. 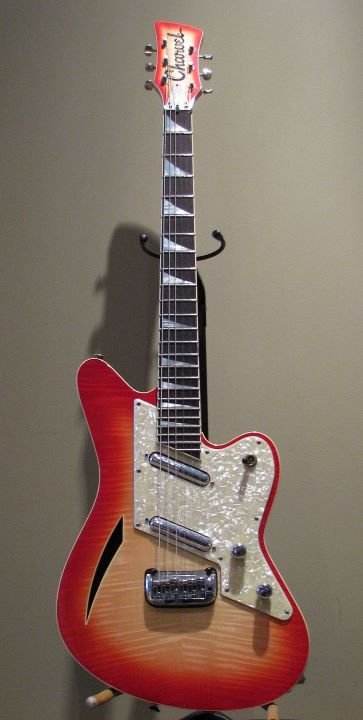 ClashCityTele said:
I'd play a Charvel. But just this one.
View attachment 1037120
Click to expand...