I found an Arrow

Red Ryder said:
And if you shoot an arrow straight up, stand still and you won't get hit because of drift from air currents.
Click to expand...

Brilliant. Unless there's a good wind in one direction you can't know the effects of random wind currents with any accuracy, and you also can't shoot "straight up" accurately enough to know the outcome. Maybe you like to play Russian roulette also?

Skydog1010 said:
Could have unknowingly dropped it without shooting it?
Click to expand...

Possibly but he shouldn't be out unsupervised in a subdivision with a kid's bow and arrow. A field with a backstop like a steep incline works. I suspect it was fired straight up and was shocked at how high and far it went. Probably looked but could not find it. I know speculation but I was a kid once.

I am a hunter and archer and a bow hunter I also dabble as bowyer that builds and breaks Native American style Osage Orange self bows. My father was a hunter who taught me at early age skills and ethics. Yeah its only a kids bow but it can hurt you badly if not handled with care.

Archer here for many years. I have some antique Bear, Scorpion, and AMF bows as well as a few I've built.

My fave bow is this Centaur Archery flatbow. It's center shot, weighs nothing and casts an arrow so soft and smooth and fast with zero stack or hand shock. I have a 31" draw so it pulls to around 50#. Bowyer Jim Nieves makes these to order, fitting the grip to the buyer's hand. Not cheap, but worth every dollar. 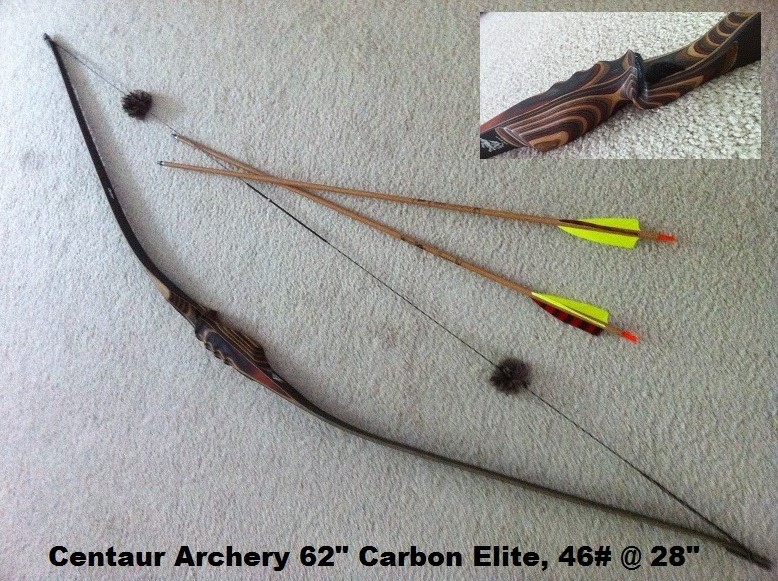 If it were a broken arrow I have an idea who might have shot it....

Peegoo said:
Archer here for many years. I have some antique Bear, Scorpion, and AMF bows as well as a few I've built.

My fave bow is this Centaur Archery flatbow. It's center shot, weighs nothing and casts an arrow so soft and smooth and fast with zero stack or hand shock. I have a 31" draw so it pulls to around 50#. Bowyer Jim Nieves makes these to order, fitting the grip to the buyer's hand. Not cheap, but worth every dollar.

And.... on a similar note, a guy in our hood we lived in about 20+ years ago used to hit golf balls with his son in the backyard. I never thought it was a good idea that they did this, but most of the time we were protected by some trees and foliage, so it really didn't bother us too much. However, every once in a while one would go astray and land in our yard, whereby I'd pick em up and put em in my golf bag. Good ones too like Callaway etc.! To this day I've never had to buy any golf balls

It probably was a kid and this arrow "got away" from him, but I'm very glad no one got hurt or property damaged. Hopefully it won't happen again.

My dad used to make those. Very nice.

When I were a wee lad I had a friend who was a bit, um... spoiled. He had all the toys I wanted but was bored with all his toys. I was over at his house once, admiring his collection of GI Joes, you know, the full-sized ones from the '60s. He had about twenty of them that I could see. Perhaps to make a point, he took a GI Joe, stuffed the largest Estes rocket engine I'd ever seen (plenty of those, too) into the back of his field jacket, and lacquered the jacket until it rigidly held the motor. He then took Joe out back to his launch pad and shot him into the next neighborhood. He said, "That's number seven. I plan to do this with the entire collection, one by one."

I always wondered how the Gi Joes he launched had landed, and if they had hurt anyone. I now have a collection of eleven GI Joes in excellent shape, and all their gear.

TeleTucson said:
Brilliant. Unless there's a good wind in one direction you can't know the effects of random wind currents with any accuracy, and you also can't shoot "straight up" accurately enough to know the outcome. Maybe you like to play Russian roulette also?
Click to expand...

Don't be so uptight. I have a 2 inch cannon that fires a two and a half pound lead ball on top of a half pound of black powder. It's pretty impressive and I've found flattened cannon ball 3/4 mile on top of the levy at the river. It's all fun till someone loses an eye.

Toto'sDad said:
A man serving in a professional capacity in Texas was hit by a falling .223 rifle bullet in the top of his head. It penetrated his skull, and he had to have brain surgery which he survived. A local man who worked at of all places in a cemetery was killed when another man fired a rifle at about a forty-five-degree angle, from an oilfield more than a mile away the bullet came down with sufficient force that it killed the cemetery worker. Almost three years later, the shooter finally came forward and confessed his conscience finally got the better of him. These are only a few incidents that I know of. Firing a weapon into the air is a very dangerous thing to do.
Click to expand...

It is not dangerous unless it falls back on you !: johnny k said:
It is not dangerous unless it falls back on you !:

We had lawn darts when I was a kid, lots of fun!

Several years ago, we had a teen rave-up in a house in the next block raided by the sheriff's department. All of a sudden there were teens running from the back yard of that home, breaking down fences across the street, sneaking through bushes, etc. When the sheriff deputy came by my house after the stampede, I asked about firing a warning shot. Her suggestion was to not fire one, but if it was necessary, to fire it straight down into the ground (not on concrete). The projectile(s) go into the ground, and don't end up falling on someone's punkin head, causing injury or death.

When I was a young child I stayed the night with a friend who had a bow and arrows. We shot for an hour into a large hay bale until we got board. There were three of us so we decided to start shooting the arrows up into the air and run around and try not to get hit.

We shot four times and never got near one of us. Then we shot the fifth. We all ran for cover and my friend who had shot the arrow started running and tripped over the bow. He fell flat on the ground, tried to get up but the bow was around one of his ankles and he tripped again. At this point he just curled up into a ball. We all just watched as no one knew where the arrow was. Most of the time it was forty yards away from where we had shot it. We waited, and waited and then FLOOMPH. The arrow lands not three feet in front of my friend who just looked at it and started laughing. We all started laughing at that point realizing how narrowly we had escaped an injury or worse.
We decided at that point to put the bow and arrows away... then we grabbed our slingshots...

Glad I wasn't hit with the arrow just found it.

Otherwise I wouldn't have Been able to slice my baby finger with a knife while cutting up a Cataloupe this morning. On my fretting hand, right in the tip. Took 4 cloth bandaids to seal it up and stop the bleeding. Hope the Cataloupe is good. This sucks.

I thought this was going to be about a Native American archeological discovery.… lil disappointed to be honest

BelairPlayer said:
More people would know/understand this if we bothered to teach math and physics anymore.
Click to expand...

Or instead of demonizing firearms. Teach more firearm safety and awareness.

Toto'sDad said:
If Texas is anything like California, bullets are being shot into the air on every holiday. Holidays are not a good time to be out walking.
Click to expand...

There was a confirmed case of a young girl here in PA (I think she was 12 or 13), who died after being struck on the head by a falling slug from a bullet that some moron shot into the air.

I would say it happened 2-3 years ago right around July 4th.