I did the silly driveway photo thing again (guitar version)

Is that a factory color on the breadwinner? Don’t think I’ve ever seen a blue one
Click to expand...

Yes, blue is a factory color, sfaik it's dead stock.

Yup, first thing I did was show it to my wife! Nice collection and thanks!

That is an awesome photo. Dang!

As with the others, I am showing this to my wife. I’ll get the look and warned off this forum etc. of course.

You're welcome, lads! It was a beautiful day with good weather, and plenty of beer and tunes.

A bit of work, but good times. Is that a factory color on the breadwinner? Don’t think I’ve ever seen a blue one
Click to expand...

I have seen the blue on the internet many times, but it's rare in the real world. As high as those things are right now, if I had a blue one I'd probably sell it and convert the money to a nice Les Paul.

I disassembled my last Breadwinner (black) with an eye toward customizing it, back when they were going for a few hundred dollars. I increased the pickup route to a Fender style swimming pool, got a pickguard with a Strat layout . . . then put it all in a box. That was 20 years ago and it's still there.

If I had seen that equipment lined up I would've thought and hoped that it was a garage/yard sale! Okay, I showed the wife. Her reaction was not what I expected (TDPRI is a bad influence etc). She was most concerned with the time. That the OP had so much time to spend setting up for that.

I think she feels the chances of any more gear purchases on her watch are so slim that she did not even need to consider that when I showed her.

Love the new behind the scenes shot (from the Making of the Driveway Photo documentary)!

Brian Krashpad said:
For about 8 years or so, the only physical grouping photo of "all" the electric gear (guitars/basses/amps/cabs) I had was one that I took on a Saturday in our old office library back in summer of 2012, before we wound up the firm. Of course, pieces come and go, so it wasn't accurate within a few years of that, if not sooner. But it's such a hassle to hunt everything down, put it all in one place, arrange it, photograph it, and then put it all back, that I couldn't be arsed to do it again. Plus, I've always done a "collage" type photo of the guitars, at least, which was very easy to update.

Anyhow, in 2020 I finally got round to dragging all the gear out on the driveway here at stately Casa Krashpad. It turned into a 2-day thing because I'd forgotten that I lent out a bass to one of my son's friends, and by the time he brought it over, it was dark, haha! But eventually it got done.

Of course, eventually I sold some stuff and bought some other stuff, but I resisted doing another "driveway grouping" simply because of the hassle factor. Until this last Saturday!

Here's the shot with the guitars added (check the amps forum for the amp shot and list of what's what): 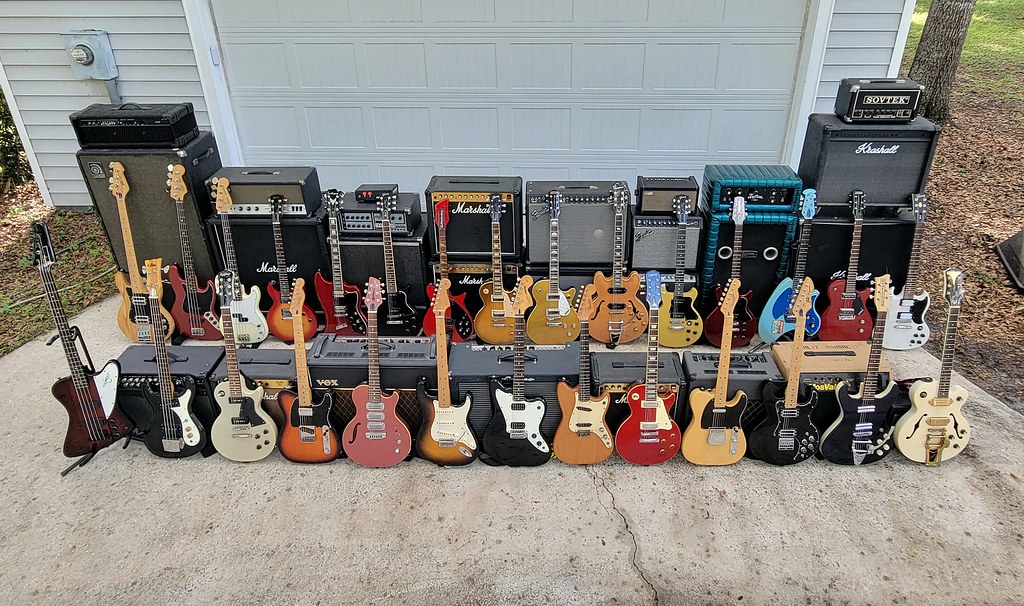 If you had a fire and could only grab one guitar and one amp...

Hahah, it’s not the size of the axe but how you swing it.

If I tried that in Houston there would be a clap of thunder as soon as I got the last piece out, and I'd have to run with everything to get it back inside.

If you ever get bored with it, let me know.