Hopefully A Painlessly Way To Get Into Experimenting With Tubes

I have been thinking about for a while, I am building another building board. A 12" deep piece of shelving, some aluminum foil over it as a ground plane, a press-board back from an organ. A hole drilled into the press-board and a tinned wire running the length of it, sandwiched together with some screws. The wire will go to a ground point and the foil will act as a shield reducing noise. 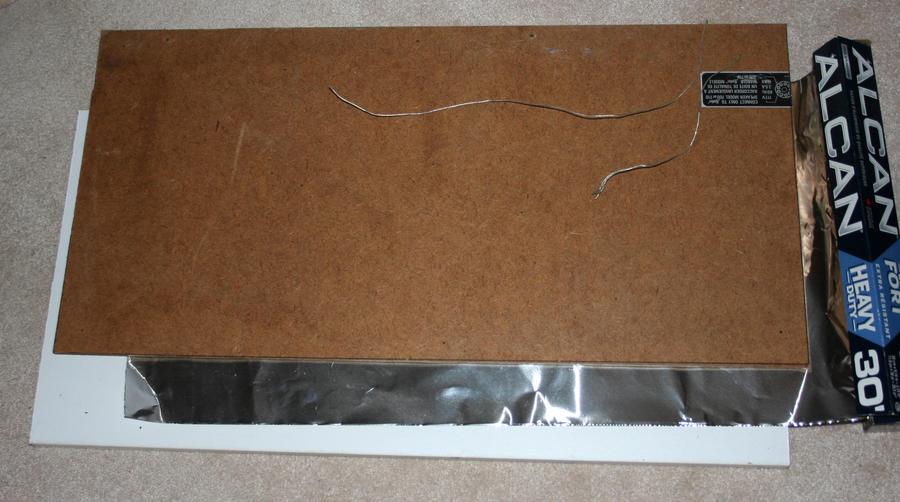 An assortment of switching power supplies at the back mainly 12V although I have other voltages and will discuss them at a later date. Will have a pair of octal sockets, pair of seven pin and four nine pin sockets. Along the left I will have some terminal blocks to make it easier to hook up the power to, not necessarily the ones shown, I think I have some others kicking around here, just depends if I will find them in time. In the front, a plate for input and pots. To the right of it is a stepdown converter hooked to a 6V pentode, will rewire it. Then the tiny board, a single voltage to +/- 24V converter, then a high voltage switcher to put out up to 400V if you can believe the ad. 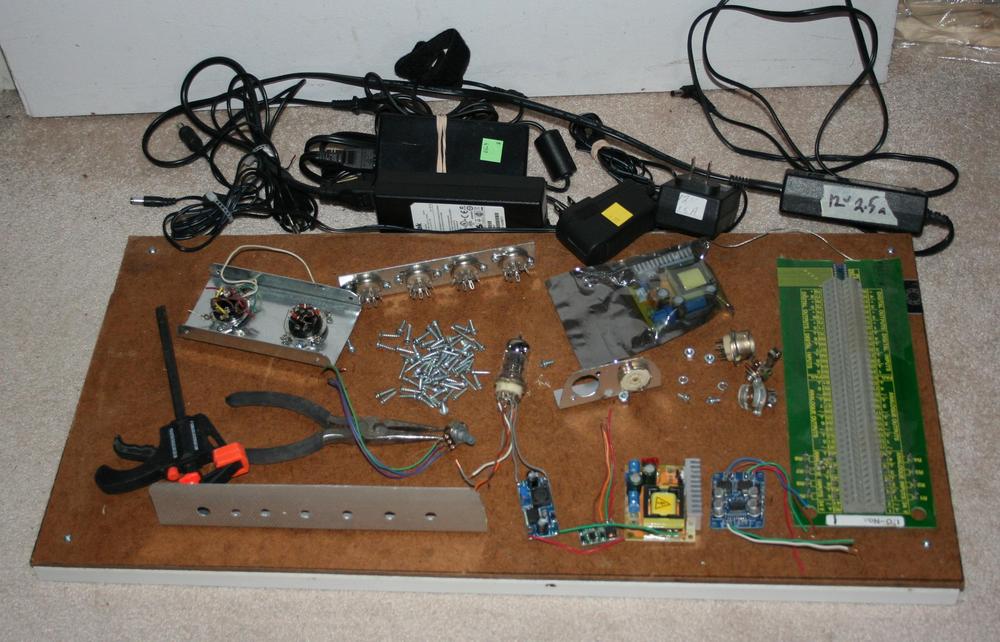 Done enough today, will do some soldering tomorrow and probably screw things down. Then the first experiment, see if the +/- 24V will be enough voltage to put across a tube or two. If so, build a preamp to go into a class D amp. I thought up this project to get a tube to run in a lower voltage circuit for the pedal crowd or anyone that wants to start off without worying about high voltage.

Great idea for a guy with as many ideas as you have - I like it!

Just never had the time to mess around much, too many other priorities, retired now. So I should get to try out some of them. But my real aim is to see if this would be a feasible way for others to go down the rabbit hole. I want to see the limitations of the high voltage module, yes there might be smoke. But getting ahead of myself. First the low voltage tube idea. A 12AX7 sucks on low voltage in my mind (sorry Valvecaster), a 12AU7 should sound better at 48V, I think a 12AY7 might just squeeze enough out of that voltage, only one way to find out. The tube kits for sweetening up your stereo (not my cup of tea) has seen a few people try the 6AK5 (Chinese 6J1) although they only tried it in triode mode. I would like to see it as a pentode.

I have been looking at the tubes I have and what the pin-outs are. Shame they are all over the place, little consistency. I started wiring some of the sockets with colors that hopefully makes some sense to me, really just going to have to make a lookup table for each tube type. I'll wire up what I need to try out this first project and do the other socks as needed. I am splitting my time between this and some guitar building, bouncing back and forth between them. And then there are the non-guitar related stuff I got going on. So this will be a slow burn kind of thread, when I feel guilty about one project being ignored I allocate some time to it.

That looks like the same high voltage switcher I have on my bench right now. I've noticed that it wants a modest load in order for it to start regulating, so a triode amplifier stage may not provide enough of a load. Just be aware. You may need to waste power with a passive load just so that it starts regulating to hold up the output voltage.

I'm using mine for a triode buffer pedal with paralleled triode stages, so the output current of my 12V supply is better than 4W. Just to spill the rest of the beans, it runs on 250V, and drives two outputs, one transformer isolated as a signal splitter.

I have been debating on what to do first, want to use the +/- supply board to power a tube preamp, had some ideas but a thread in another forum had me moving virtual parts around to get a Long Tail Pair type of stage together. Being the curious type I wanted to know if I could cascade the stages with the use of a switch. Just a rough idea, part values will most likely have to change or disappear/show up. A late night idea.

Great. Another thread in Amp Central that inspires me to come up with another amp idea to try. I have no use for micro power amplifiers. Under 2W, who cares? But 2W can be loud through a decent 12" guitar speaker. So you run the amp with an attenuator or a VVR. But since you are running the amp at low voltages why even bother with high voltage? Use a low voltage (relatively speaking) output tube like a 25L6. Normally run off 110-180V, why not 30V? Why 30V? At first I thought a 24V transformer to supply the heater and you end up in the 30V range once rectified, but why not use a cheap DC power supply that already puts out 30V. Like a HP printer PS? Found in many thrift stores.

So output tube, a 12AX7 sounds crappy on 12V in a valvecaster, 30V might be better but if all else fails a 12AU7 will do. Not enough gain so maybe a FET first stage? Or a pedal inspired thingy? I just occured to me, the HP supply has 15V and 30V. IC friendly.

FenderLover said:
That looks like the same high voltage switcher I have on my bench right now. I've noticed that it wants a modest load in order for it to start regulating, so a triode amplifier stage may not provide enough of a load. Just be aware. You may need to waste power with a passive load just so that it starts regulating to hold up the output voltage.

I'm using mine for a triode buffer pedal with paralleled triode stages, so the output current of my 12V supply is better than 4W. Just to spill the rest of the beans, it runs on 250V, and drives two outputs, one transformer isolated as a signal splitter.
Click to expand...

+1 - I have the same dc/dc converter here. Not sure you'd get enough current for an output stage (maybe a 12AT7/reverb transformer type is within reach?) But it'll fire up a few preamp tubes for sure, and, yes, it'll need a little bit of current draw to regulate well.

If you feel like building your own using the 555 timer "nixie power supply" circuit it works very well, just be sure to select an adequate inductor, 2A rating is good. Tayda has a perfect one I can vouch for. I built a couple all the same, they all worked just fine. One day I will make a 555 type of booster, I bought a couple inductors for it. Just a little teaser I guess. Found the HP power supply and a 12V dc 1A adapter that I think might work for the output transformer. I cut the case with a hacksaw being relatively careful to not cut into the transformer, pried it apart with a screwdriver. The transformer is held in place by the prongs, a tap with a hammer gets it loose.

Cut the prongs off with the hacksaw, desoldered the board and soldered wires onto the terminals. I was debating what to do for a case, just in case it actually works. Found a cigar box that I cut off the lid and glued a top on it to be used as a little ukulele to mess around at work. No longer working so off with the top. The idea is that someone with minimal tools could make a low voltage amp. After the bits are sorted out aluminum foil will cover all the internal surfaces, along with the nonexistent lid, glued on with crazy glue. I will breadboard it just in case my bright idea doesn't work out.

FWIW there was an entire family of vacuum tubes designed to operate from low plate voltage. Some info here:

elpico said:
FWIW there was an entire family of vacuum tubes designed to operate from low plate voltage. Some info here:

Yes I have seen them. I have an output tube that runs on 30V but I want to use more regular tubes that anybody could get without too much trouble. And a big part will be to see if it will work.

I know, you all were being polite and thought "He really has been getting covid-crazy." So as to not waist too much time I just tried out the power section into a WGS ET65, listed at 98 dB. As expected it needs some work. I have the screen driven straight off the supply and it sags more than I would like. But otherwise it makes sound at roughly the proper level. Don't expect much clean headroom, but then again that was not the point of it right? Only had the power section going, a 12AU7 in series for the 25L6 to run off the 32V. I used a Champ type amp as the preamp driving the 25L6.

Next day. Change cathode resistor, only around 1.2V bias, told you not much headroom. The sag I was seeing was the cathode cap bias voltage going down. Remove it and a little less gain but steadier sound. Took out the input coupling cap, running at Class A2, putting current into the grid. A little louder. Might as well take the cathode resistor out. Better yet. Still at TV levels but a little more clean headroom.

So in the end the 'Champ' with no speaker plugged into the grid (I have a 50 ohm resistor always wired across the output jack), the 25L6 hooked up in triode, a 220k resistor across the grid but doubt it is doing anything. Basically the output tube hooked up and that is it for parts other than the power supply and the 'output transformer'. I would like to try a lower voltage adapter as an output transformer but I picked a 12V one as it would be easy for anyone to find. I could see an opamp feeding the grid rather that the 'champ'. Maybe a dual opamp with the first stage feeding a tone stack then the second opamp into the tube.
Could get rid of the 12AU7 and use a resistor for the extra voltage. Or use a 15CW6 for the output tube and run the heater off the 15V tap. Fun and games, and nobody gets hurt by high voltage. I also have an output tube that was designed to use low voltage, a 26A7. Heater eats 0.6A though, uses up all the power supply's current. May try it sometime soon.