Boreas said:
The other thing I notice is CORROSION on the saddles.
Click to expand...

Here's the deal...some players will corrode the strings off a guitar in one set because their body chemistry is such that their sweat eats metal. Other guitarists can play for months on a set of strings and they're perfectly fine--usually because their hands don't sweat very much at all.

What you have going on there is galvanic corrosion caused by dissimilar metals. The brass saddle preferentially corrodes in electrical contact with the steel or nickel alloy of the guitar string. That creates a rough spot on the saddle that abrades the string through tuning and bending, which microscopically pulls the string over the saddle.

Graphite saddles will eliminate that problem. If you don't want to switch saddles, try a different lube, such as 3-in-1 oil. Use a very small dot of it, applied with the point of a toothpick. Do this after cleaning the corrosion off the saddles and polishing them.

One thing I found on my strat was that it wasn't the nut, but rather the edge on the bridge plate. There was a little problematic corner. Rather than file on a vintage strat bridge, I took a little bit of wire insulation and slipped it over the string. Never broke another one.

How long are your shows? How much do you play it outside of that? 6-7 shows on one set of strings would be impossible for me. They’d never last that long without breaking, and they’d sound absolutely awful long before they broke.

I replace strings every single gig. That means 2-3 times a week, these days. I haven’t broken a string in years. Knock on wood. But I guarantee I would if I tried to get more than two gig nights out of them.

This may simply be a matter of played out strings deciding they’ve had enough.

guitar_paul1 said:
I took a little bit of wire insulation and slipped it over the string. Never broke another one.
Click to expand...

Stevie Vaughan's guitar tech Rene Martinez did this on Stevie's Strats. He also used a Dremel and a small pointed polishing stone to ease the sharp edges on the bridge plates.

Another thing you can do on a Strat is drill out the string ball holes (3/16" diameter) in the block to bring the strings' end twist wrap up through the bridge plate. This eliminates string breakage at the plate through-holes. This trick will not work with Fender Bullet strings because they have no twist wrap at the ball. 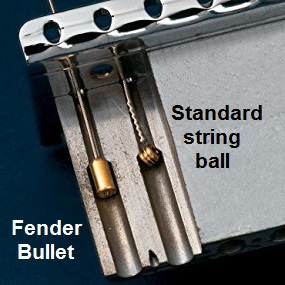 I was a fairly regular string breaker at gigs. It occurred to me that 10's felt right when sitting on the edge of a bed but didn't push back enough against the added adrenaline on stage. I switched to 11's and never did more than 2 gigs on the same set. Worked for me.

Jakedog said:
How long are your shows? How much do you play it outside of that? 6-7 shows on one set of strings would be impossible for me. They’d never last that long without breaking, and they’d sound absolutely awful long before they broke.

I replace strings every single gig. That means 2-3 times a week, these days. I haven’t broken a string in years. Knock on wood. But I guarantee I would if I tried to get more than two gig nights out of them.

This may simply be a matter of played out strings deciding they’ve had enough.
Click to expand...


To be fair, as a support band or for the city festivals we’re playing, sets are usually only 30 or so mins long.

But yep, it seems the general consensus is that while the coated strings I generally use might still be sounding reasonable, they are probably still mechanically wearing and then failing. So changing more often may be the solution!

Chrisholmes90 said:
To be fair, as a support band or for the city festivals we’re playing, sets are usually only 30 or so mins long.

But yep, it seems the general consensus is that while the coated strings I generally use might still be sounding reasonable, they are probably still mechanically wearing and then failing. So changing more often may be the solution!

Time to bulk buy some uncoated strings…
Click to expand...

Keep us posted on the results.

Boreas said:
Keep us posted on the results.
Click to expand...

Unfortunately we don't have another intense run of shows planned until Feb/March time next year now, but if I'm still breaking them in between now and then I know it's definitely a problem

I've had it where the holes where the strings come through the bridge plate had a burr. Also have had the tiniest burr on a saddle do it too. Had to smooth them out didn't get anymore string breakage. Hopefully you sort it out.
Last edited: Oct 26, 2021

I tried to follow the thread but just suck sometimes

So I’m not sure, did the o.p say where the strings are breaking?

As far as where along the length


Peegoo said:
What does the broken end of the string look like? It will tell you precisely what the problem is. Example:

A jeweler's loupe helps, but a USB microscope (about $20 on Amazon) is indispensable for this sort of stuff. And you can take snapshots and vids with it. 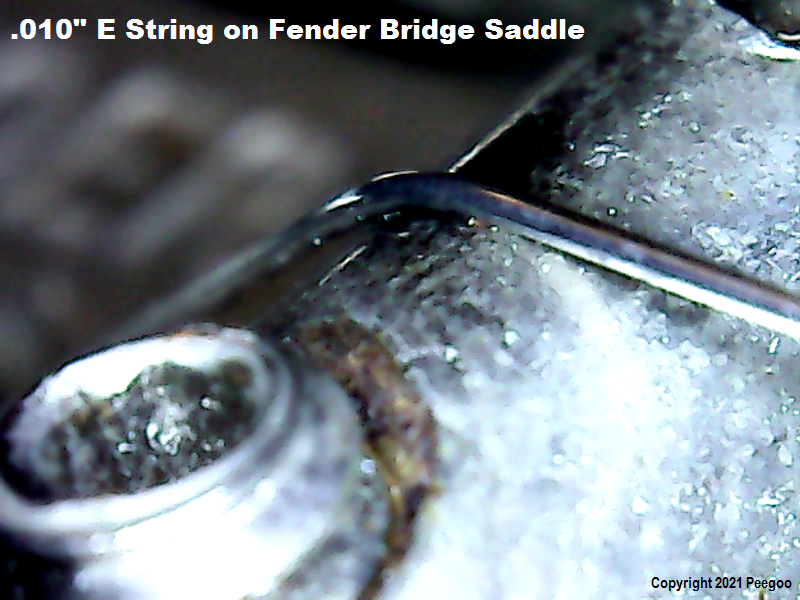 VVVV Great solution for those with three-saddle old timey bridges - glad GraphTech has these! 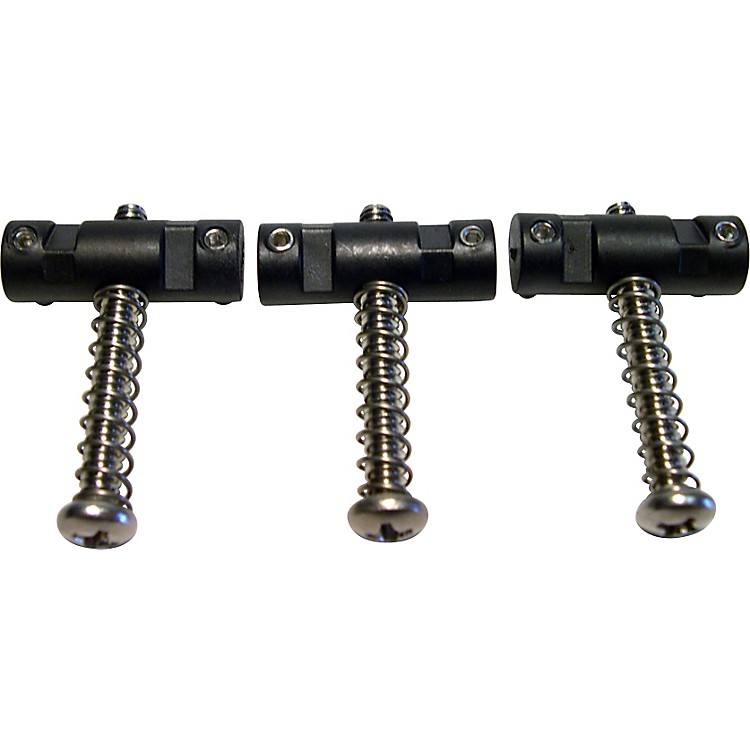 Chrisholmes90 said:
I might just have to find something a little cheaper for the live shows as a pack of NYXL’s a week sounds rather expensive.
Click to expand...

Stick with D'Addario and try the XL's. I play a lot and heavy handed and have not broken one (Yet). Not taking into account your sweat, and how much more you might be playing than me, I've just been utterly stunned by them. They go pretty dead before I change them.

I switched to them in the last two years after three decades of using GHS Boomer 10's. I tried different ones along the way like Elixirs and Ernie Balls but nothing else ever took.

Oh, and sorry if this is obvious but do you clean/wipe down your strings? And not just from the top but run the rag under them all at the pup area and then slide it up and down under. That's what gets missed. the gunk under. Thin nylon works great for this.

And yeah, your saddles look pretty bad at the point the strings hit, especially on those broken ones. Maybe a different material type for the saddles. That looks extreme and like dissimilar metal corrosion.

Chrisholmes90 said:
Thanks for this, how fine are we talking?! Might grab a couple…


Cheers. The break is definitely at the saddle - the USB microscope is a good shout, I’ll take a look.

same thing happened to me with those style saddles, with such a steep break angle like on a tele those sharp saddles just don't make sense really. that's definitely your issue and if I were you I would just get standard barrel notched saddles, you know the ones with the grooves.
T

I went to GraphTec saddles on my Tele both the bridge, nut and string hold down on the headstock and haven't broken any string in a very long time. I did the same on my home built Strat with the same results. I use to break strings all the time, I bend a lot as well. However after looking at the picture I wondered if its the sharp end on the base plate hole since the string does bend across that outer edge?? Just speculating! Maybe its not the saddle itself? Maybe radius those holes would minimize grab on the string. Good luck.

I've broken 1 string in the last 5 years, and that was the high e when attempting a 4 step bend...

I play 9 - 42 too. How anyone is breaking 11s so regularly amazes me. I don't play super hard but being a funk guitarist I do dig in and snap the strings for popping sounds.

I change strings once a month, I use Fender 250s lovely bright clangy strings for funk.

EDIT : The above is not aimed as a criticism just amazed as string breaks hardly ever happen to me.
Last edited: Oct 29, 2021

Small, almost microscopic burrs on saddles are a major cause of string breakage at that point. Abrasive cord is available in several thicknesses and can be used to smooth the groove in the saddle over which the string passes, and also the notches in nuts.
In reading the contributions in this thread, I'm puzzled as to why some players need to change string sets as often as every performance. That sounds ridiculous, as well as costly. I'm a lead player who bends frequently and doesn't play like a *****. It has been years since I broke any string on any of the guitars I play. I religiously use a device called The String Cleaner after every set. It is a hinged device, inserted opened, under the strings at the pickups, and snapped closed, sandwiching the strings, then slid along the strings from the bridge to the nut and back down again. The strings are sandwiched between 2 microfiber pads which line the device's surfaces and effectively clean all surfaces of the strings. I know how long-used strings sound as opposed to new strings. I have used the same set of strings for several months without breakage or loss of much resonance, practicing this cleaning method.

A 4 step bend? Quite an achievement. Bravo.

I use brass saddles exclusively. 9.5 D'Addario strings. Heavy Herco picks. Don't break strings but maybe once a year. Lucky I guess.
You must log in or register to reply here.

neck pup not as loud as bridge on American Pro II

A Belated New Tele Day: A Saga For Our Times
2