Hardtails are so rare

Here you go. I chose hot rod red and tort for you.

eddiewagner said:
I am looking for one. Nowhere to be found. I was such an idiot to sell mine years ago.
Click to expand...

Curious...My Telecaster has a hard tail and in my experience most of them do. I am looking for one. Nowhere to be found. I was such an idiot to sell mine years ago.
Click to expand...

no no no no no you were not an idiot the todo that ! be nice to yourself . An idiot would have traded the guitar for a Marla Singer high malignance relationship. ( I actual think that Marla is on her way to becoming the healthy person in the film ) I have two Strats with a full ensemble of heavy duty springs all cranked down and the wang bar tail pieces are as stable as a hard tail string through body strat guitar.
You may have a though about this I want this I must have, and that's fine and you can get the same effect plus the springs according to Ry Cooder says that they add a little resonance as a plus .

My Strat partscaster is a hardtail. First guitar I assembled in the late '80s. I think that only remaining item on it now is the output jack. Same basic concept just better parts over the years.

Killing Floor said:
Here you go. I chose hot rod red and tort for you.
View attachment 940765
Click to expand...

Nice. But no mod shop in Germany.

omahaaudio said:
Curious...My Telecaster has a hard tail and in my experience most of them do.
Click to expand...

That’s absolutely new to me.

eddiewagner said:
Well, that’s over the ocean in the USA.
Click to expand...

I got a squier tele hardtail on thomann, i don't know if they are still for sale though.

The first guitar I built and still one of my main go to guitars is like a thinking with a hard tail strat bridge. They're great. I've assembled this one: 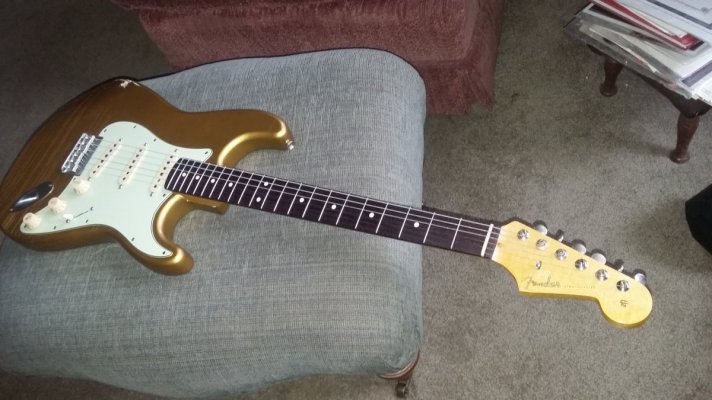 With four more in the queue: 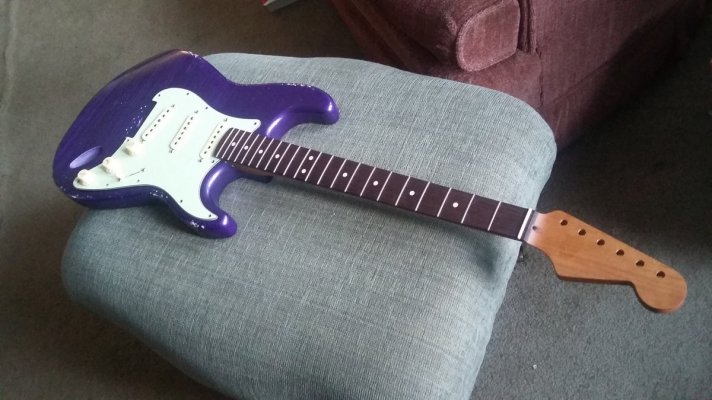 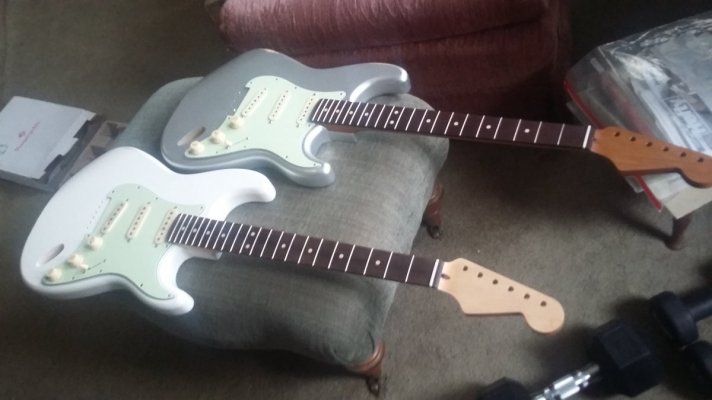 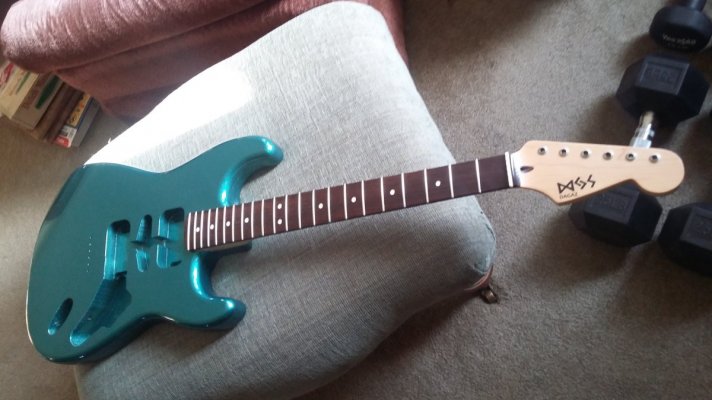 I'm down to one Strat and keep the trem floating on it but, in the past, I usually kept the arm off and tightened down the tailpiece flush to the body. I didn't use the tremolo at all and tuning was much easier.

Look at the Tremol-no. I use it to lock down a 1996 Standard Strat. Quite effective, and can be undone for restoration to the original setup.

If I can build one, so can you. Chicago Matt said:
Maybe a myth, but I still think the trem block adds something to the Strat's tone that I like. Of course, nobody can hear it but me.

I always thought that was an old wives tale, but after playing nothing but Teles for a few months I recently broke out my Jeff Beck and I was amazed how loudly I could hear the springs resonate when I quit playing.

Now that I think about it, the tremolo on my Beck is floating, and I bet that makes the springs resonate much more.
S

Jakedog said:
You’re not the only one who can hear it. I hear a definite difference between a hardtail and a decked trem. I prefer the latter. So does Eric Clapton, for whatever that’s worth.
Click to expand...

I went "the rustic route" - a tree in my old front yard in Warner was shedding a piece of bark and it's been blocking it for better than 10 years. Funniest part was I got it @ the Warner Recycling Center (I miss that place Men) for free. It was one of them Peavey EVH things with a pickup and all that was wrong was the Trem Block so I "barked it."
Works real good now.

You can get a Squier Bullet HT strat, if you don't mind the slightly thinner body and lighter weight. There was also another Squier, made over a decade ago. I've had many Strats with decked trems including 2 pre-CBS. But my hardtail 74 has turned out to be the best and a keeper for life. The new Ibanez AZES31 is interesting too, but it comes with a master tone control and side mounted jack.
W

radiocaster said:
You can get a Squier Bullet HT strat, if you don't mind the slightly thinner body and lighter weight. There was also another Squier, made over a decade ago.
Click to expand...

I was just about to mention those, but they are/were top-loaders if that's an issue.

I got lucky and stumbled across this "Rhapsoby" on Reverb. Made in Korea by Samick, string through hardtail from around 1982ish. 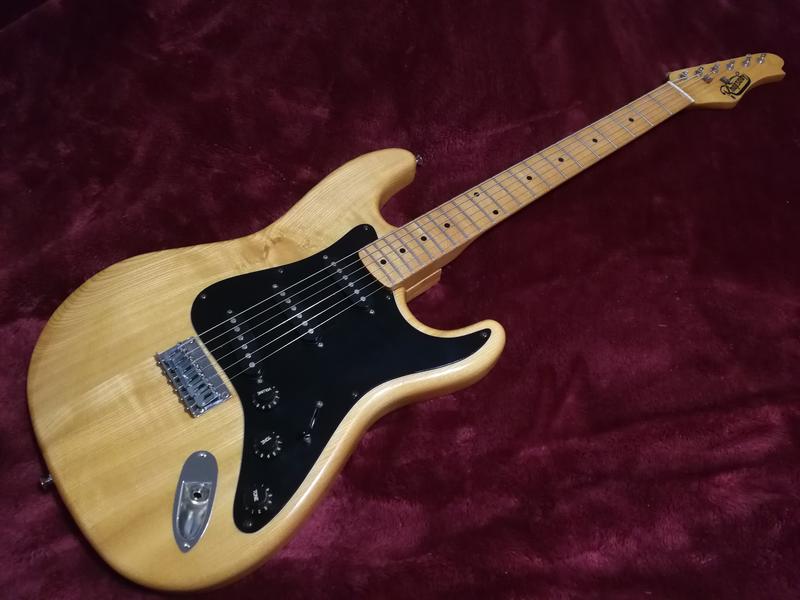 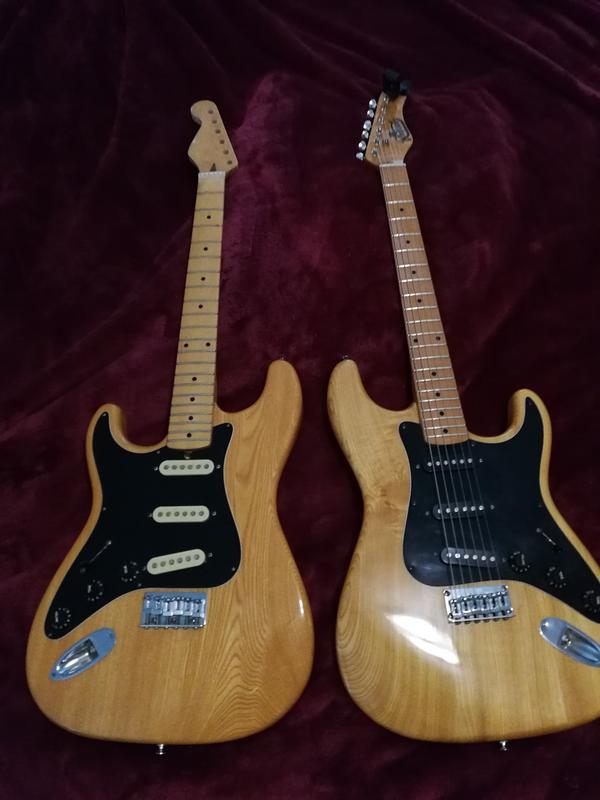 Then found a really odd Aria STG, 2 pickup, and also string through. This one is likely Korean, dated around the time the last Japanese ones were made, but has a plywood body and tuners I associate with Korean guitars 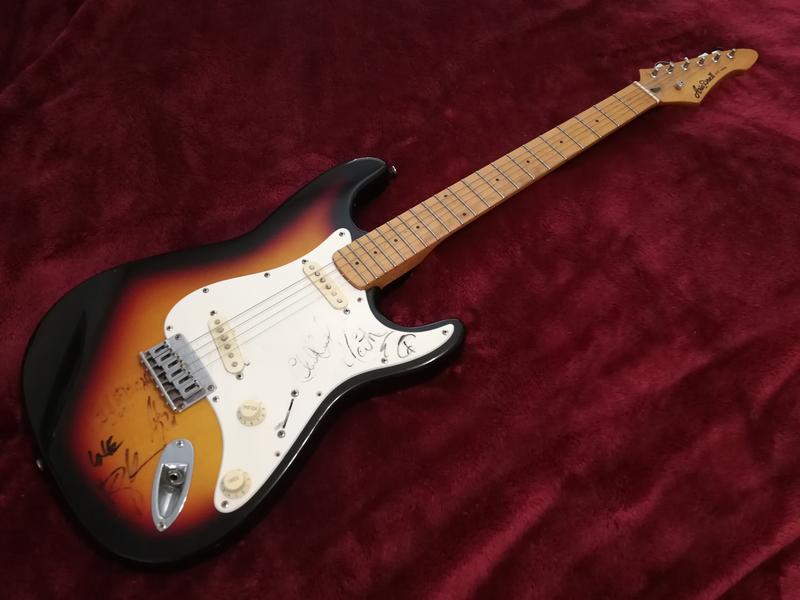 I've seen the Arias pop up from time to time, both 2 and 3 pickup versions.
G

Cost me about 1500 with case, if i dont count the full pickguard/electronics swap.
You must log in or register to reply here.

What do you think of this hardtail body?

Which Hardtail Bridge for 72 Tele Deluxe?