Guitar suddenly going out of tune.. any ideas?

So for the last 2 days I have faced a mystery concerning one of my guitars. I've had it since 2016 and it's been played weekly since. Super solid tuning, generally I can leave it for a month, come back to it and it'll be near enough in tune!

It has a really nicely cut bone nut which was installed in 2017, upgraded locking tuners, although the strings are about 6 months old.

We've had some weird weather here, with it about 20C in the morning, up to 34C in the afternoon, and the guitar is on a stand in a room that has AC for about 6 hours a day. Humidity meter shows a steady 60%.

Yesterday morning I picked up the guitar and it's really oddly out of tune - some strings sharp, some flat. I retune and find that every 5 mins or so the tuning is drifting a lot. I put it down to the AC which is relatiely new, but it's not gone out of tune in a 'uniform way', like all flat or all sharp, it's random. After playing and retuning multiple times for about 30 mins, I gave up and played another guitar.

Today, the exact same thing! The other guitars in the rack don't have the same issue and are pretty much rock solid.

Just wondering if anyone has seen this before on a ingle guitar, do I need to change strings, to call an exorcist, or there is a rational explanation?

Strings are easy and cheap, but maybe not the issue.

Have you checked to see if your neck screws are tight? It almost sounds like if the neck is moving a little bit, one side goes sharp and the other side goes flat.

That is an odd issue, though. Worn strings are more uniform, and don't really pull sharp as much as stretch flat.

$0.02 and all that, from just another bozo on the internet.

...and while you are at it, check the bridge too. It sounds like something may be wiggling a bit loose.

I am liking the loose neck scenario. Is there any direct sun on it?

Change the strings. While you're at it, lubricate the nut and bridge contact points and make sure the bridge, saddles, and tuners are not loose. If that doesn't fix it, you'll need somebody smarter than me to help.

All of the above. I'd definitely loosen & retorque the neck (bring the screws up in stages in an alternating pattern).

6 months for strings? That's a long time unless it's just sitting in a closed case a lot.

I found something similar with mine this year too. First time I’ve noticed it but I’ve been using the AC a lot this summer so I’m guessing humidity amd changes in room temperature are to blame. I switched up from 10’s to 12’s too and thought that might be a factor so I removed a bit of nut material. Still had the same problems with tuning though, so I’m putting it down to weather.

thegaijin said:
I found something similar with mine this year too. First time I’ve noticed it but I’ve been using the AC a lot this summer so I’m guessing humidity amd changes in room temperature are to blame. I switched up from 10’s to 12’s too and thought that might be a factor so I removed a bit of nut material. Still had the same problems with tuning though, so I’m putting it down to weather.
Click to expand...

Same. Every time I picked up my guitars this past spring they were all ridiculously out of tune. I kept commenting on it to my jam buddies but they didn't have the same experience. I think there were big swings in humidity or air pressure or something.

Get a new guitar. And some fun pedals.
S

Some strings going high and not others might be caused by nut being looser for some slots and tighter on others. When temperatures changes cooler, metal shrinks or hotter expands. The cut or tolerances in slot size can then bind to hold in place or allow sting to tighten or loosen. Depending on room temperature some of my string click in nut when adjusting and some don't. Even thought they have been filed, adjusted and oiled. So even if everything is perfect, it's right or lefty.

Does your action change at all when the tuning goes off? Any pattern as far as which strings go out?

Stop worrying about it and do something cheap and easy. Put on new strings and see what happens.

All of the other possibilities involve things moving that should not.

Does this guitar have a vibrato? If it does, one string going out could affect the others.

Dumb question, but is there a small child in the home who could be fooling with it.

Please let us know how this plays out.


EDIT:
I was informed that didn’t mean what I thought that meant. I apologize.

I always keep a tube of Chapstick with me and lube my nut on a regular basis.

lol, when my kids were young, one of their friends thought it was peculiar that the knobs of the tuners were not aligned with each other ... and helped me by aligning them ... and cacophony!

If one side is going sharp and the other side flat, it's definitely the neck shifting.

Lomg ago I had an aluminum-necked headless Kramer Duke with a serious design flaw.
Tuners were on the body, and the ball end of each string was fed through up at the nut.
But the fixture for them was attached with a single machine screw in the center.
If you bumped it on anything, one side would go sharp and the other side would go flat, rendering the guitar unusable until it was straightened and tuned again.

Another problem - as the neck heated up under the stage lights, the whole guitar would go sharp. I could only ever use it for the first song or two of a set. Then our stage tech had to retune it again so the singer could use it mid-set for a tune where she played guitar.

Other than that it was a decent guitar. Hot pink, pretty cool looking onstage (hey, it was the 80s...). It had factory DiMarzio Super IIs - super bright sounding - and a resin fretboard. The heavy aluminum neck never needed any adjustments. It had good unplugged sustain, but no liveliness at all in its feel. 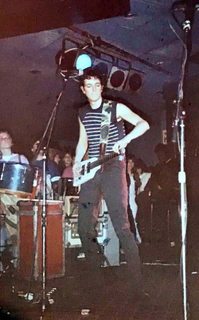 Here's a picture of one that somebody put a less aggressive neck pickup into: 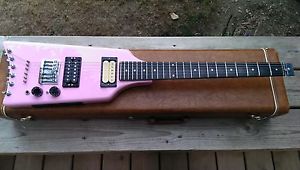 Neck Bend After Only One Year??

What's going on with this neck?