Guess what day it is?

Wikipedia to the rescue:

Cinco de Mayo (pronounced [ˈsiŋko̞ de̞ ˈma̠ʝo̞] in Mexico, Spanish for "Fifth of May") is a yearly celebration held on May 5, which commemorates the anniversary of Mexico's victory over the French Empire at the Battle of Puebla in 1862,[1][2] led by General Ignacio Zaragoza. The victory of a smaller, poorly equipped Mexican force against the larger and better-armed French army was a morale boost for the Mexicans. Zaragoza died months after the battle from an illness, and a larger French force ultimately defeated the Mexican army at the Second Battle of Puebla and occupied Mexico City.

More popular in the United States than Mexico,[3][4] Cinco de Mayo has become associated with the celebration of Mexican-American culture.[5][6][7] Celebrations began in California, where they have been observed annually since 1863. The day gained nationwide popularity beyond those of Mexican-American heritage in the 1980s due to advertising campaigns by beer, wine, and tequila companies; today, Cinco de Mayo generates beer sales on par with the Super Bowl.[8] In Mexico, the commemoration of the battle continues to be mostly ceremonial, such as through military parades or battle reenactments. The city of Puebla marks the event with various festivals and reenactments of the battle.

Cinco de Mayo is sometimes mistaken for Mexico's Independence Day—the most important national holiday in Mexico—which is celebrated on September 16, commemorating the Cry of Dolores in 1810, which initiated the war of Mexican independence from Spain.[1][9] Cinco de Mayo has been referenced and featured in entertainment media, and has become an increasingly global celebration of Mexican culture, cuisine, and heritage.

It's Cinco de Talko around my place. (71st birthday today). 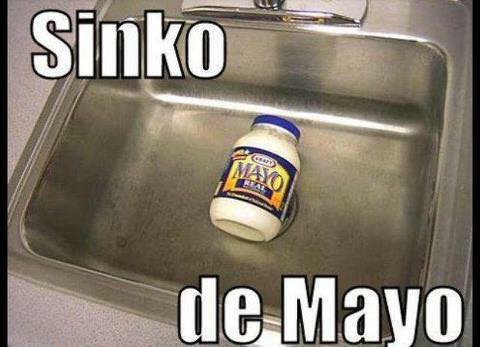 Started yesterday by making the refried pintos.
Enchillada sauce is waiting to be warmed up (made it earlier)
Enchilladas, chalupas, retried beans, single tortilla nachos, guacamole, soft corn tortillas and, of course, margaritas

Gotta make a run for some salsa and some more sharp cheese.

My plans for today. I'll head down there early for lunch, then later for dinner. It’s the only day of the year that I absolutely avoid my local Mexican restaurant. Way to crowded.
You know you are getting old when you walk into an empty bar (or restaurant) and you say “I love this place”.

I don't have a clue what 5 de mayo is. Is it when ozzy took a leak on the alamo or something ? pretty cool song though.

give 'em hell its your day! HB

I made my own salsa today

johnny k said:
I don't have a clue what 5 de mayo is. Is it when ozzy took a leak on the alamo or something ? pretty cool song though.
Click to expand...

I feel it is as if Canada's minor holiday Victoria Day became strangely popular in Korea and folks there walked around eating poutine and dancing in toques.

johnny k said:
I don't have a clue what 5 de mayo is. Is it when ozzy took a leak on the alamo or something ?
Click to expand...

Maybe it’s more like your quatorze juillet, where hundreds died storming the Bastille, for honorably claimed intention, but no reasonably beneficial outcome because, you know, life is futile, then you die.

I know, humor sometimes is lost in translation or by wet blankets who forgot about the having of fun…
You must log in or register to reply here.

Does anyone know what's going on with "The Fretwire Company"