Gretsch guitars...tell me about them

Something about those half-moon inlays on that dark fretboard wood just looks super cool.

The only Gretsch I’ve ever tried was a Duo Jet back in the 90s, and I remember thinking it sounded really cool but its feel was so different than what I was used to that I played it on a few songs and then went back to my guitar.

That’s no shade on the Gretsch; it didn’t feel bad to me, just very different in configuration, resonance and sustain. I’d have needed to learn it to get comfortable on it.

I used to play with a fellow who played a gretsch country gentleman I think it was called. He also had another gretsch he played. They sounded fairly good however my experience with them was they hard to intonate but they had very good tone response. That was in the 70’s . About 1 1/2 years ago I met a younger fellow good singer with a brand new gretsch mij - dont know the model. The action was fairly good .It sounds like crap. We experimented with different strings but it still sounds like crap both accoustically or through the amp. I guess its everyones individual tastes but I wouldnt have that model of gretsch if it were given to me.

Sadly, the company that uses the gretsch name today makes solid guitars that they call duo jets, but are really just another les paul copy. I think it's sad and shameful, personally. Real duo jets are wonderful. 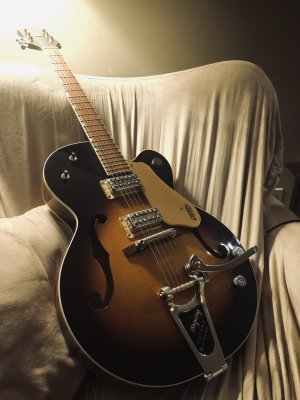 JamesAM said:
congrats to you and your friend on finding the one good 70s Baldwin gretsch. It’s hard to find a specimen whose binding hasn’t rotted away, so good on ya.

I won’t deny that there are dogs in any population of guitars, but general consensus is that the ones built since fender took over in 2005 are top notch.
Click to expand...

Im not talking finding the old one. Im talking playing the the old one. To me a tele still sounds mostly like a tele after 40 years. The old gretsch sound i remember is nothing like the new stuff.

JamesAM said:
hilotron single coils, which are super low output. Not sure of an example of this, but very 60s-ish jangley things.
Click to expand...

Beatles: Day Tripper, I Feel Fine. These were played on a Tennessean (they now call them Tennessee Rose) with Hi-Lo trons.

NTC said:
Beatles: Day Tripper, I Feel Fine. These were played on a Tennessean (they now call them Tennessee Rose) with Hi-Lo trons.
Click to expand...

Ahhh thank you. I wasn’t sure if his tenny had hilotrons or filters, that’s perfect

Some of the new pickups are a bit different than the classic Gretsch stuff. The blacktop broadtrons for example are more like a PAF crossed with a Filtertron. I think they are capable of some great tones, like a really clear version of a PAF.
U

Sadly, the company that uses the gretsch name today makes solid guitars that they call duo jets, but are really just another les paul copy. I think it's sad and shameful, personally. Real duo jets are wonderful.
Click to expand...

1) The ones that look sort of like Les Pauls are not solid, but chambered. Closer to hollow bodies than not but how much chambering depends on when they were made. It took Gretsch until relatively recently to get the chambering the same as it was on the 50s models (Vintage Select series).

2) The knob configuration you notice would not normally be on a model with Filtertrons; that would be on a model with deArmonds or modern deArmond style "Dynasonics". Gretsch deArmonds in the 1950s were made to different spec than deArmonds used on other manufacturers' guitars. e.g., Martin electrics as the Gretsch ones were around 7-8k not 11k.

3) Models with Filtertrons traditionally don't have a tone control but have a tone switch (often referred to as the "mud switch"). I actually quite like the concept as the pickup gets a direct line to the amp without tone pots.

I bought the G5422 12-string a couple of years ago. Very neck heavy, but it is a hollow-body 12 string. I love the thing, gets that classic 12 jangle w/out the anorexic Rick neck and gets a decent sound unplugged for sittin' on the couch playing. MIK and the finish in person on these is gorgeous.

stantheman said:
The 6120's made by Terada in Japan
are IMHO the best Gretsch Nashville's
of all time.
Click to expand...

I strongly disagree as pertains to 99% of them. I have/have had probably 40 vintage Gretsches over the years and around 10 of them vintage 6120s. The Terada ones are to me boring and their poly finish lacks mojo. I've really tried.

HOWEVER, that said, the particular model 6120 Brian Setzer "Smoke" with lacquer equals and I dare say exceeds my vintage 6120s and I am seriously considering selling my 50s ones because it is that good of a guitar and one I highly recommend to anyone I talk to.

Gretsch is a great brand if you want a guitar to play with your fingers instead of a pick.

George Harrison brought the Gretsch out of its elusive tenure, thanks to his Duo Jet and Country Gentleman guitars, and it's also recognizable when you realize it was used by other great guitarists such as Randy Bachman (who has collected and owned several Gretsch guitars), Duane Eddy, Chet Atkins and Joe Walsh (who has played a Gretsch White Falcon for many years.)

There is a clip somewhere of Doug Fieger (the late guitarist for The Knack) where he mentions that his father bought him a Gretsch Country Gentleman after seeing George play it on the Beatles Ed Sullivan Show concert. He also added that it had flatwound strings and that Berton Averre (lead guitarist for The Knack) used it to play on That's What The Little Girls Do from Get The Knack. That guitar was sadly auctioned off after Fieger's death in 2010.

Bob Weston (the guitarist from Fleetwood Mac who was sacked in 1973 for having sexual intercourse with Mick Fleetwood's then wife) also played a red Gretsch that can be seen on the cover of his bluesy 1980 solo album, Nightlight, despite having played mostly Fender and Gibson in the past. Rather handsome too. Weston sadly died in 2012, so there is no clue as to what happened to this Gretsch. Lindsey Buckingham also played a Gretsch 6120 for much of the Mirage album, most notably on the track Oh Diane as well as on solo albums Go Insane and Law and Order. I also have no clue where it is, I assume Lindsey still owns it. NTC said:
Beatles: Day Tripper, I Feel Fine. These were played on a Tennessean (they now call them Tennessee Rose) with Hi-Lo trons.
Click to expand...

The epicenter of Harrison's HiLo Tron Tennessean use was the Beatles for Sale album and Help! There is always some debate around the edges but I think Hard Day's Night is too early and Revolver is generally too late.

Also the Animals "House of the Rising Sun".

JamesAM said:
congrats to you and your friend on finding the one good 70s Baldwin gretsch. It’s hard to find a specimen whose binding hasn’t rotted away, so good on ya.

I won’t deny that there are dogs in any population of guitars, but general consensus is that the ones built since fender took over in 2005 are top notch.
Click to expand...

I've never seen a 70s Baldwin era Gretsch with binding rot. (Baldwin took over in around 1968 but didn't get fully flying till they moved production out of New York to Booneville, Arkansas a couple of years later.) But 70s Gretsches like Fenders can be very heavy and they can be over constructed.

teleman1 said:
My feeling about Gretsch are that if you are a fairly accomplished player, you will be surprised. Whatever it is, you just play differently and inspirationally to certain degrees with a Gretsch. No other guitar seems to do it like that.
Click to expand...

I'm a crap player, and I notice the difference right away when I play one of my two Gretsches. They sound so much like a Gretsch, it's startling. Makes you think of different things to play.

Setzers old guitar that was the model for the Hotrod had a tone post, not trestle bracing. That's a big block going from under the bridge to the back.

My first year Setzer Hotrod made in '97. Terada build, smaller than regular 6120. I fitted alnico magnets to the stock pickups and they have that gritty chimey quality especially into a Vox Topboost amp.. It's a wonderful guitar. I use a roller Tuneamatic bridge I pinned to the top myself. Even on big wobbles of the Bigsby it stays in tune all gig.

This is a great fun guitar to gig. It has a Tele quality at times, at others this sweet dirty tone. Often when I hear a recording and think Tele...? It's a Gretsch.

Sounds like Gretsch Duo Jet.
Not exactly solid bodied. The arch top is a steam pressed laminate, rather than carved maple IIRC. They're not 'hollowbody', not exactly 'semi-solid'.
They're like/similar to nothing else. Usual description applies when it come to a Gretsch. About halfway between a Tele and a Les Paul.
Cutaway knob is master volume, the rest are individual volumes and master tone.
Like the rest of the Gretsch guitars, early ones had Dynasonics, Filtertrons from about '57.

Uncle Daddy said:
The modern Duo Jet is still a semi solid body with a machined out main body with a maple cap.
Click to expand...

They are making different things they are calling duo jets. I love the '53 reissue.
The ones with a stop bar and TOM style bridge are solid, or "chambered".
But a real duo jet isn't just "chambered", it's hollow in a way that lets the top move.
You must log in or register to reply here.