Great guitarists who are far more interesting to watch than to listen to.

effzee said:
I put some thought into this and I think in this kind of weird narrow metric, Prince would probably top my list


And here fom 3:29 (although the whole thing is brilliant)

Yep
That "Gently weeps" thing, if you just listen to it, it's ok.
It's only when watching Prince perform his part that it transcends into the realm of becoming magical. 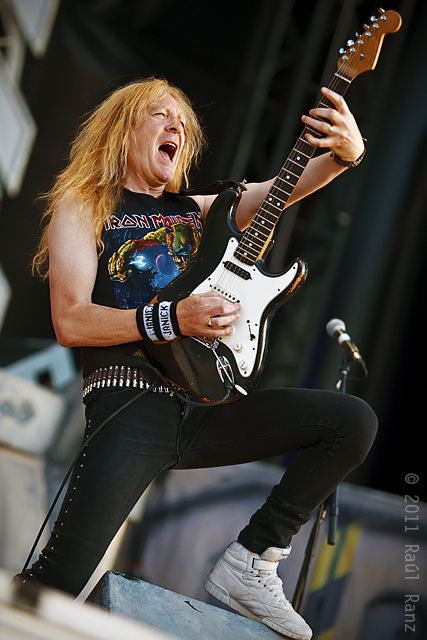 'eavy met'l, innit?​
Sure... he plays his parts in the studio, but live...?
Well... he mostly runs about flailing and posing and not actually touching the guitar all that much.
He can do this with impunity because Iron Maiden already has two guitarists(Murray and Smith) who always are solid
and lay down the parts as they should. This leaves room for Gers to do... well... whatever the heck he's doing.
This also leaves room for me to ask: Why does Iron Maiden need Jannick Gers?
Click to expand...

I thought that was Dave Murray til I googled.
They have more than a passing resemblence:
View attachment 1030562
Obviously I've not kept up real close
Last edited: Sep 19, 2022

Skyhook said:
This also leaves room for me to ask: Why does Iron Maiden need Jannick Gers?
Click to expand...

That one leaves me scratching my head also. I was aware of him from that terrible Bruce Dickinson solo album, "Tattooed Millionaire" (I wish I could get my $12 back). I have no clue why anybody in Iron Maiden thought they needed a third guitarist.

TheCheapGuitarist said:
That one leaves me scratching my head also. I was aware of him from that terrible Bruce Dickinson solo album, "Tattooed Millionaire" (I wish I could get my $12 back). I have no clue why anybody in Iron Maiden thought they needed a third guitarist.
Click to expand...

Yeah... he can play guitar for sure. It's not his fault per se that Tattooed Millionaire was sub-standard as a whole. Although, guilty
pleasure, I do like the title track. However... Gers is no Adrian Smith! Neither as a guitarist nor as a song writer.
This was painfully obvious when he replaced Smith on the mostly dreadful album No Prayer For The Dying. This album was the
absolute pits, especially coming off the extended hiatus following their masterpiece Seventh son of a Seventh Son.
So... Maiden soldiered on for a few albums and in the end lost Dickinson as well. After two really terrible efforts:
The X Factor and Virtual XI they regained both Dickinson and Smith in one fell swoop for the Brave New World album.
But they retained Gers and this is where the "why?!" comes in. My best guess is that he's a mate and mostly harmless
in the big scheme of things.

Funny thing... on the "b-side" of the single release of "The Wicker Man" there are two live tracks. One from The X Factor(Man on
the Edge) and one from Virtual XI(Futureal). Both these now sung by Dickinson. On The X Factor it was painfully obvious that
Maiden still wrote material for Dickinson's range even though Blaze Bayley did not have command of that range.
On Virtual XI they had learned their lesson and composed tracks more suitable for Bayley's range. So... lo and behold...
On those two live versions Man on the Edge sounded really good and well suited for Dickinson while Futureal put
Dickinson out of his comfort zone and into a range that was, if not catastrophic, then at least audibly sub-optimal for his voice.
Last edited: Sep 19, 2022

Don't know HOW MANY braincells I lost listening to Uncle Ted over the decades. He's amazingly energetic and mesmerizing live, even after a hip replacement, and his bandmates are mostly 40 years his junior. True, his lyrics are not poetry, but then we can't all be Joni Mitchell. But if his brand of authentic scathing rock 'n roll blasting through the car stereo doesn't make you reach out and crank the volume knob, get off my bus.
L

Man, I saw these guys back then, and everyone was going crazy over that skinny dude flailing around. I was right up front for the show and the noises coming from that amp... pretty much sounds like this clip, it's almost like a "shreds" video.

Had to think a while before understanding the question. Like, why watch someone if you don't like the music? And why not listen if you like the playing? What about live albums?

But then I came to think of Eric Johnson and Rory Gallagher. I think I get it now

I am not a guitarist, but the player who mesmerized me is Al Di Meola The last time I saw him was in ‘95 or 6 in Palo Alto. Just an amazing talent, but his music is never going to be mainstream. He makes it look so easy

Easy.
Oturus Orungus, Balsac, and Flattus (IIRC, the second 2 are about half a dozen people from the 80s to now).


I own 1 Gwar cd.
Much better show than music.

I'd say the same about KISS, but
1. They're too imbedded and have songs that are pop culturally significant
And
2. Ace doesn't suck. I'm not an Uber fan, but he's the only member of that band I can say wrote pretty good stuff as a solo guy.

Most of the notes flurry virtuoso guys are pretty bland to sit and listen to. Vai almost has songs that seem like songs, probably due to Satrianis influence (who himself has some actual songs, with repeating parts you can hum, unlike Malmsteen et al...)
I think SRV is great to listen to and watch, but once you've seen one SRV-A-LIKE, you've seen them all. And trust me, you've seen them: they play voodoo chile behind thier back and make weird expressions on the easy parts because they can barely play the faster parts so can't break concentration....
I noticed the difference when I was about 15, between really sharp blues players covering SRV because people wanted to hear it and guys trying to wank on a strat to look as good as SRV.

So, I suppose if you can't get noticed because you're a person with writing ability and strong sense of musical structure, may as well be known for looking impressive as you play, right?

There's nothing wrong with it. I'll leave yall with this non guitar flashy trick. They band is great, but everyone only youtube searches this song instead of thier 6ish great originals. You'll see why at 2:28

Jeff Beck? I have no desire to listen to his last 5 or so releases, but pretty sure I can still enjoy him playing live.

The Mars Volta was a better listen and less of a show live, but Omar's pedalboard was a show in itself

brookdalebill said:
The guy plays great.
He’s also ANNOYING as all get out.
Same with Greg Koch.
Click to expand...

I love watching both.
O

The premise is a non starter due to the specification of "great" guitarists. Lead guitarist Tommy J. Croole is not great, but he's quite good and I always find his stage mooves entertaining.

Jack White. Can't take more than a song or two but how he uses effects is fascinating.

Defending Joe, Steve, Yngvie - you're just not into their style of music. I listen to their albums from front to back all the time.

That was pretty freaking amazing.

TheCheapGuitarist said:
That was pretty freaking amazing.
Click to expand...

The guys got an amazing neural system to, well, do what he did in that video, and that isn’t even scratching the surface.

I was a devoted fan of Return to Forever, and Al was the diamond in that treasure chest.

Yeah, pretty much all of radio friendly modern country for me is in that category. Fantastic first call players on the records and utterly banal song writing, the Nashville machine. Then when I run into those stars on youtube demoing some lick I always think, "wow, these guys can really play!"

Picked up a Dierks Bentley CD the other day, 'cause someone told me they loved the guitar tones. And they do sound good, the players are all clearly pros, but the content is such a bad caricature of what Country could be that after a single listen through it's relegated to my stack of "use only as a reference for some guitar tones when mixing that style".

To the OP's list I mostly agree, but I love watching and listening to SRV, I think he was a great songwriter and player, a very rare combination. But I think that of Prince as well. So many fabulous guitar players can't write themselves out of a paper bag but those 2 were great IMO. I used to like Nugent, he had some really good records in the 70's and earlier, but now he's just an old irrelevant racist, can't listen to him with that baggage.

Songwriting is every bit of a practiced skill as shredding on guitar is, being good at one doesn't mean you will be good at the other without putting in the commensurate work.

All IMO of course.
You must log in or register to reply here.

So I go over to my friends home around 1976. He says you gotta listen to this band called "THE TUBES"!
2

Who is your favorite jazz guitarists of today playing over CLASSIC jazz tunes?
2 3

New Found Love for playing along with the Grateful Dead
2