Got your holiday lights up?

Its almost 60 degrees here in Pittsburgh today, so I'm hustling to get the outdoors lights up today. Metal ladders are no fun when its cold.

My Lights don't go up until After Thanksgiving.
I only do indoors anymore.

My daughter got me a string of lights to put around my desk at work. I installed them this past Monday (11/21). The last time I put lights around my desk, (my teammates and) I got bumped out of the building I was (we were) working in (back in '19). So it's almost like a joke to see if I can tempt fate and have it happen again.

Just to add a little context to things, I'm not the festive decorating type. I put the lights around my desk in '19 more at the request of a fellow teammate, who wanted to see if we (collectively as a team) could make things look kind of festive. The ironic thing is I had been at the same desk for like 4+ years, but the lights had to be taken down shortly after they were put up.

I will also admit that I wanted to put lights around my desk (this time) because I sit apart separately from my current teammates (we're on totally different floors within the same building). While I have some really nice neighbors around me, the lights kind of help me feel like I belong here. The cool thing is I've gotten a few compliments on the lights being nice, even if they're just a single string of 100 blue ones.

...As to decorations at my house? Nothing yet. We had an inflatable snowman thing for the lawn that broke/popped last year, and I think we're still trying to decide if we're going to replace it. Also, we have a 4' or so pre-lit tree that we put on a table, but I don't think the family is really crazy about it, so that might get replaced too.

Not till mid Dec.

Neighbor across the street took down his elaborate Halloween decor and started the Xmas lights the next day.

I gotta scarf leftover Turkey sammiches for a while to gain the strength to put up 6 strands of std lights on the front porch...

Absolutely not. Putting up any Christmas decor before thanksgiving is good and over should be a first degree felony. Selling or displaying them before Halloween should be a captitol offense.

Any business or person caught playing Christmas music before thanksgiving is over should be taken away in a non-descript van in the middle of the night and never heard from again.

Nightclub Dwight said:
We switched over to LED lighting and it has really reduced our December electric bill.
Click to expand...

I actually meant to install them. To get even a decent lighting display would cost at least $500.

"I got a lot of problems with you people". (for the rest of us)

I have a little battery operated lava lamp angel I stick in the window. Done.

I’ve got most of ‘em up outside. I don’t turn them on until after Thanksgiving. We do the inside too - that will be done next week. I like the tradition of it as much as the actual lights, and I wouldn’t like the over-the-top craziness of some displays on my own house. But I like looking at the crazy ones when driving by.

I understand this sentiment. That said — the lights that I do put up, I put up unrelated to any particular holiday and not because of any religious affiliation.
I put up lights because it is winter, because here in the Midwest it’s cold and
it’s dark and anything that even makes it feel less cold and dark — I’m in.
Last edited: Nov 24, 2022

Just finished with Phase I. 40+ today. Couldn’t waste it. 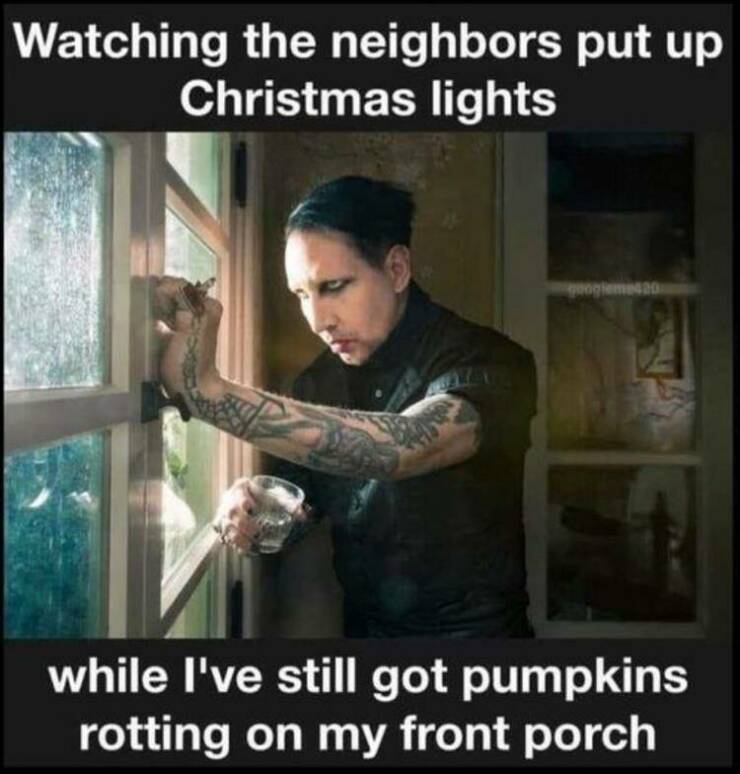 As much as I intend to.

Our deer take care of our pumpkins before they rot

No way. We have a rule: no Christmas music or decorations allowed till after thanksgiving at the earliest. We won't put up lights or get a tree till maybe two weeks before Christmas.

We didn't put ours out yet. Maybe will have time this weekend.

I walked into the pack and save, Safeway by any other name, mid November and there were xmas decorations going up in the store!
Mein Gott, ist nichts Heiliges?
apparently not...
Read the poem "Christ Climbed Down" by
Lawrence Ferlinghetti In the Pocket Poetry series
Coney Island of the Mind that might express a different perspective than the Ad-Mas scripting.
I try to stock up and make it out of the stores prior to the Xmas rush shopping hysteria event of the season and not come out until December 28 or 29th . Crowd hysteria leaves a metallic taste on the psyche kinna like too many chain smoked cigarettes', big lines of crank, and beer from a can. Definitely a taste you'll remember , well at least I have.
Seasons Greetings I think the only lights we put up are on the tree. Okay, maybe on the wreath on the front door. It goes up the day after my wife's birthday in early December.

She was born on the exact same day as Ozzy Osbourne, but don't tell her I posted this.

Only partly. The rest - on a weekend. I think we still have a lot of time for all the decorations and first i want to look at this site and decide on what i am going to do with the math paper i need to write for the next week. All those assignments always put me in so much pressure that i can't even think clear anymore.
Last edited: Nov 25, 2022

Nah, I don't have to do that anymore. It's been years.
You must log in or register to reply here.

Got my holiday jam rig picked out, how about you?

G
How Do You Mark Or Identify Your Hand Tools?
2

3 wires on (both) tele pickups?