I use the American Stage cables - I can't remember who makes them at the moment.

They have good solid end plugs on them and evidently, they also have a sturdy cable construction, because I've got a few that I've abused for years now with no failures.

Their price used to be very reasonable, I'm not sure how they are priced now.

I remember buying a couple of those Monster brand cables in the 1990s and those only lasted a year or two before crapping out on me - a lifetime guarantee isn't much good when the stuff breaks down when you are depending on it.


edit: For myself, a good cable is one that continues to function properly when you are counting on it.

radtz said:
Please send me your old ones. I could use a perfectly good cable or two.
Click to expand...

Thanks for asking nicely, but ahhhh NO. I'll keep my cables, thank you

Make my own, Canare GS6 and Neutrik ends. Tried Mogami once, and didn't like it, felt like it was choking the sound.

I've got some Whirlwinds around that are good general purpose.

I also have a George L that I use when recording.

Only have to buy it once.

I am not a fan of buying expensive cables. However, I do remember that back in the 80's, every cable I bought had a "lifetime" guarantee. I used have a stack of the card board cards they were mounted to when you bought them.

I still have one particular 20' instrument cable I use for my bass from back in the day. I was using it before I went wireless. I was at a gig and I must have walked too far from my and pulled the amp head off of the speaker and it crashed to the floor. It was an old Lab Series guitar head and the spring reverb made the loudest sound ever. Believe it or not, everything kept working. The only damage I could find was the instrument cable end bent about 25 degrees but it was still solid, and I still use it. The actual causality came later when I ripped the spring reverb out and through it away in a fit of pique.

Yeah, Jimi used only the best! : 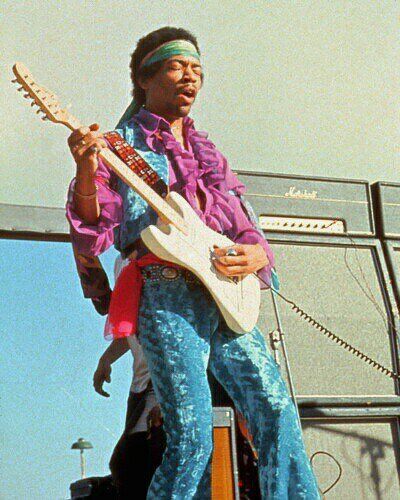 A lot of folks are real persnickety about finishes, hardware, pickguards, straps, amp grilles... but are fine using boring black cables. Life's short—give your audience more for their money and use something that adds a little interest!

loudboy said:
Make my own, Canare GS6 and Neutrik ends.
Click to expand...

This is exactly what I use too, making your own really is the best way to get high quality cables at a reasonable cost.

Timbresmith1 said:
The cables I bought 20 years ago are so good I haven’t needed to replace them.
Click to expand...

I've got a cable with screw on plugs, so I can trim off a short piece and reconnect the plug. No soldering. I might have had it longer than 20 years and it's a little bit shorter than it once was, but works perfectly.

I've got some 3' Fender ones (that look a bit like the cable off an iron) for use at home as they go straight down to my pedal board and straight into my recorder. I had to cut the plugs off and put new (better) ones on fairly soon after I bought them. If they sound any different it might be because they are so short and have less capacitance (less roll off of the high end), but to be honest I can't hear that if I compare them to the 15' one I have with the same cable.

I just keep a few spares in my gig bag, just incase of a failure mid gig as it only takes a clumsy step on the cable or to pull it too hard and it might cut the connection inside. I just keep a few spare of the decent plugs to solder back on after the gig if it comes to it. Gradually they all end up with the replacement ones on them, but (so far) I've never known one break in the middle of the cable.

I have normally viewed instrument cables like the "My Pillow" products...mostly marketing that drives the sales rather than anything inherently superior to any of them. Sure, the difference between a truely bad cable and a good one is significant, but the rest all fall in essentially the same category. Even worse, there are always videos being posted with cable shoot-outs where the guy claims to hear a vastly different tone while I sit there with studio quality headphones on not hearing any real difference.

That disclaimer aside, I did just receive my new cable from Rattlesnake Cable and thought it would be a good time to comment on it. I chose to order it out of curiosity and a need for some really robust cables for stage use now that the old band is talking about re-forming...yes "Gas Station Chicken" might be taking the stage yet again, grey hair and all.

Anyway, I use a bunch of cables that I have compiled over the years, mostly home built ones. The red and blue cloth covered are both just mogami 2524 wire with switchcraft ends that I built about 12 years ago. They are very similar to the Fender Custom Shop cable in the picture and likely used the same source for the cloth covering back then (although I can't recall who that supplier was now). I think the Fender cable runs about $40 these days, my builds were likely half that.

The bare wire with the gold ends is the Southcreek audio cable (I have many of them) which sells for about $12 these days!! It is a bargain with good shielding, strong connections, drapes really nice, and sounds as good as the Mogami to my ears. For home use, can't go wrong.

The other bare wire with the silent plug is also a home built using Mogami 2524 and the neutrik ends...I think it cost me about $20 to make give or take. It also drapes well, sounds good, doesn't tangle.

Then there came the Rattlesnake cable in (obviously) the rattlesnake covering that I received today. These run around $45 so on par with the Fender Custom Shop cables. Right off the bat, I noticed that the covering is different from the cloth used on my home builds and the Fender offerrings. The others feel like cotton, smooth to the touch while the rattlesnake feels very much like a hemp rope, a little scratchy in a crystallized way. If you ever did any roping with a hemp rope, you will understand what I mean. It even drapes and acts like a quality hemp lasso in how it moves and lays on the ground. A little stiffer than most cables, but also feels VERY robust and durable without any risk of tangling or developing any memory.

I plugged in expecting the same neutral tone that I get from any quality cable, but it surprised me. I clearly heard a little more mids and a smoother bass response. I laughed it off and attributed it to just a case of listening with the eyes instead of the ears, but after 20 minutes, it was clearly there. I tested it against my mogami cables and the southcreek and there was no doubt, the bass was smoother and a little punchier. It wasn't a eureka moment, but there was a noticeable tonal difference....in a good way.

Okay, so to wrap this up. I think rolling your own or buying the southcreek audio cables if you don't solder is the best bang for your buck, especially for home use, but I will have to give Rattlesnake their due in that their cable really did offer something other than just bling and marketing...it is a good sounding cable. I think I will have to oder one of the snakehead versions which leaves a few inches of bare cable at the guitar end since the covering is a bit stiff and rough....don't want to rub the finish off the guitar.

100%. 1 or 2 at a time I replaced all my instrument and speaker cables with Rattlesnake. And my pedal jumpers are all EBS. Worth it.

And if you think the Rattlesnake cables are too much just get on the mailing list. He sends discount codes every week.

Also, true story. A few months ago I ordered one of his new red cables. I ordered online Saturday after 4 my time and it was in my mailbox Monday. Do the math. Custom/handmade to order. Shipped 1,500 miles Saturday night to Monday. That’s basically time travel.

Killing Floor said:
100%. 1 or 2 at a time I replaced all my instrument and speaker cables with Rattlesnake. And my pedal jumpers are all EBS. Worth it.
Click to expand...

I might be doing the same thing piece by piece although i have been happy with my speaker cables thus far...still might.

George L's are pretty good value for the money. I have never tried the George L's, mostly because of the forum blather over the years complaining about the high treble and overly thin wire. All of which is likely unfair, but it was enough to steer me away from them.

Milspec said:
I have never tried the George L's, mostly because of the forum blather over the years complaining about the high treble and overly thin wire. All of which is likely unfair, but it was enough to steer me away from them.
Click to expand... Maybe overrated, but I'm still using some Monster cables I bought 25 years ago.

I like Fender Custom Shop cables. They're good quality, no particular hype, and they lay flat. Maybe $39 for an 18-footer?

I do not like those $10 Reverb-branded cables. I used a few, and didn't think much of it, but when I used one of my usual Fenders in that spot... oh yeah, big difference. The Reverbs went right in the trash.

Guess I’m in the minority. I haven’t bought or needed to buy any for 15 years. I own other decent brands, but I mainly use George Ls. I’ve never noticed the trebly sounds. Oh, I know! I have tone controls on my guitars and amps. I know Eric Johnson used them; they make them in heavier gauge but he liked the thin ones. Anyway, they’ve been working for me.

strat54 said:
What is the "best bang for the buck"?
Click to expand...

The "no snake oil" brand is the absolute best.

There's no mystery or "sound" in cables.

Soundwise the ONLY "truth" is that there are cables with low capacitance that let all frequencies "pass through " and higher capacitance ones that filter out highs.

It all depends on your style,preference and gear.

But claiming that a particular cable has or "improves " a "sound " is the epitome of internet BS. (Well not exactly since "speaker cable" actually takes the internet BS cake )

I’ve had the same Monster cables for over 15 years now. They’ve been rock solid.

I “upgraded” to Mogami Gold a few years ago. I didn’t find them any better or worse than the Livewire cables I also have around. Same deal with George Ls.

I just bought some new ones from another company because that’s what the local store had for different connector options, I think they’re EBS...some acronym. I’m sure they’ll be fine, too.
You must log in or register to reply here.

the dissapointment of it all