This is kind of repetitious but it sounds like at least three problems.

You did say (or I didn't see if you did) exactly what your "tuning problems" are. Does it go sharp, flat, over time or immediately after being tuned? Each string? New fresh strings? Are the nut slots sized to the strings? Backlash in the tuners? Tuner bushings tight? Is the guitar subject to variations in humidity? Temperature? This time of the year most of my guitars are going sharp when they sit in a cold closet. Each of the above have solutions, you just have to figure out what is happening

The cracks in the lacquer (I'm assuming it is lacquer, do you know for sure) do look like expansion from temperature or humidity swings. The cracking around stress risers look a bit like bonding problems with the prime coats - I had this happen one time on maple when I did not use vinyl sealer. I agree that it should not be happening with a new guitar.

Frankly the pictures of all your lovely guitars hanging on the wall scares the heck out of me. Particularly the acoustics. Unless you have really good humidity control you are asking for problems. My little mom and pop music store has a closed loop humidity system that during the winter dumps two galleons of water per day into the showroom air. My little room humidifier in my music room goes thru a half galleon. I still keep all my guitars in their cases with individual sponge/baggie humidifiers.

Guys, modern Gibson lacquer does not check like 1950/60s lacquer, it's a very different finish to the stuff they used back then. If you're thinking of the delicate spider webbing you see on vintage guitars as typical checking, you're very unlikely to see it on a modern one.
S

The tuning thing is probably nut slots.
The finish...
Todays nitro is not the same formulation as nitro of old. They add plasticisers, these days, to reduce the checking. I've two Custom Shop LPs that I've had a couple of years. They live in my living room with central heating, no special conditions and the heating is turned down at night. No checking or cracking, whatsoever.
The Gibson factories did close down for a few weeks in the early part of the pandemic - they literally stopped what they were doing, locked the doors and picked up where they left off a few weeks later.
It could be your's was one that was in the middle of being sprayed at the time, though the COA and QC tags will only tell you when it was passed for shipping. I think, May '2020 was when they resumed production, but I couldn't swear to it.

IMO There's a problem with the wood not being fully cured to perfection before they finished it, and I'm not sure the finish was applied to perfection which seems to show it lifting up where the cracks are. My guess is that over time that finish will flake off in big chunks. This is not normal checking and IMO they should give you a replacement FWIW. I love natural checking as much as the next guy, but what I'm seeing here ain't it.

You got a bad finish. You can try to convince Gibson to cover it under warranty, but they’ll probably blame it on the environment, not matter what you tell them, and refuse to cover it.


Your tuning instability is your nut. I’d bet cash on it. Gibson hasn’t cut a decent nut since they started plekking everything. I know that seems counterintuitive, but it’s the truth. Their nuts suck. Take it to a good tech (who is used to cutting nuts for Gibsons) and get a fresh one done. Or perhaps a great tech can even fix the one you’ve got. Gibson just doesn’t cut their nuts correctly for the way the strings pull kinda sideways through them. They all stick these days.

jayyj said:
Guys, modern Gibson lacquer does not check like 1950/60s lacquer, it's a very different finish to the stuff they used back then. If you're thinking of the delicate spider webbing you see on vintage guitars as typical checking, you're very unlikely to see it on a modern one.
Click to expand...

Agreed. The standard finishes today seem to be about 10 times thicker and very tough - not "designed" for checking at all. It takes a lot to crack it, but when it does - BOY do they crack! Break out the eye and ear protection! Certainly nothing "subtle" or "fine" as with nitro or thin poly.

what ya want for it then?

The long vertical lines seem to start in earnest in the 60s, although they can check either way in that era. This is a '69 with typical long vertical checks: 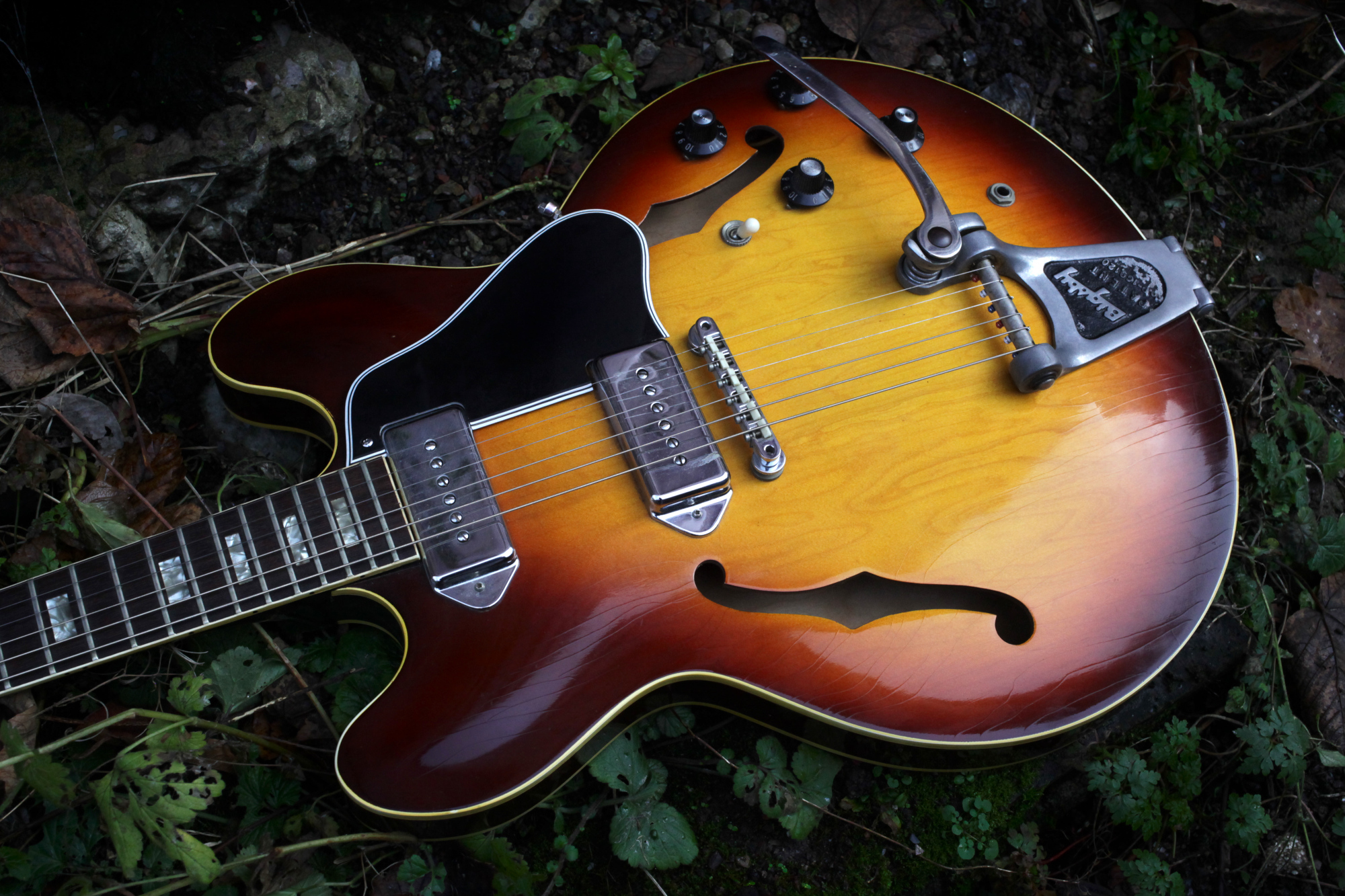 And a '65 with more classic checking but still vertical: 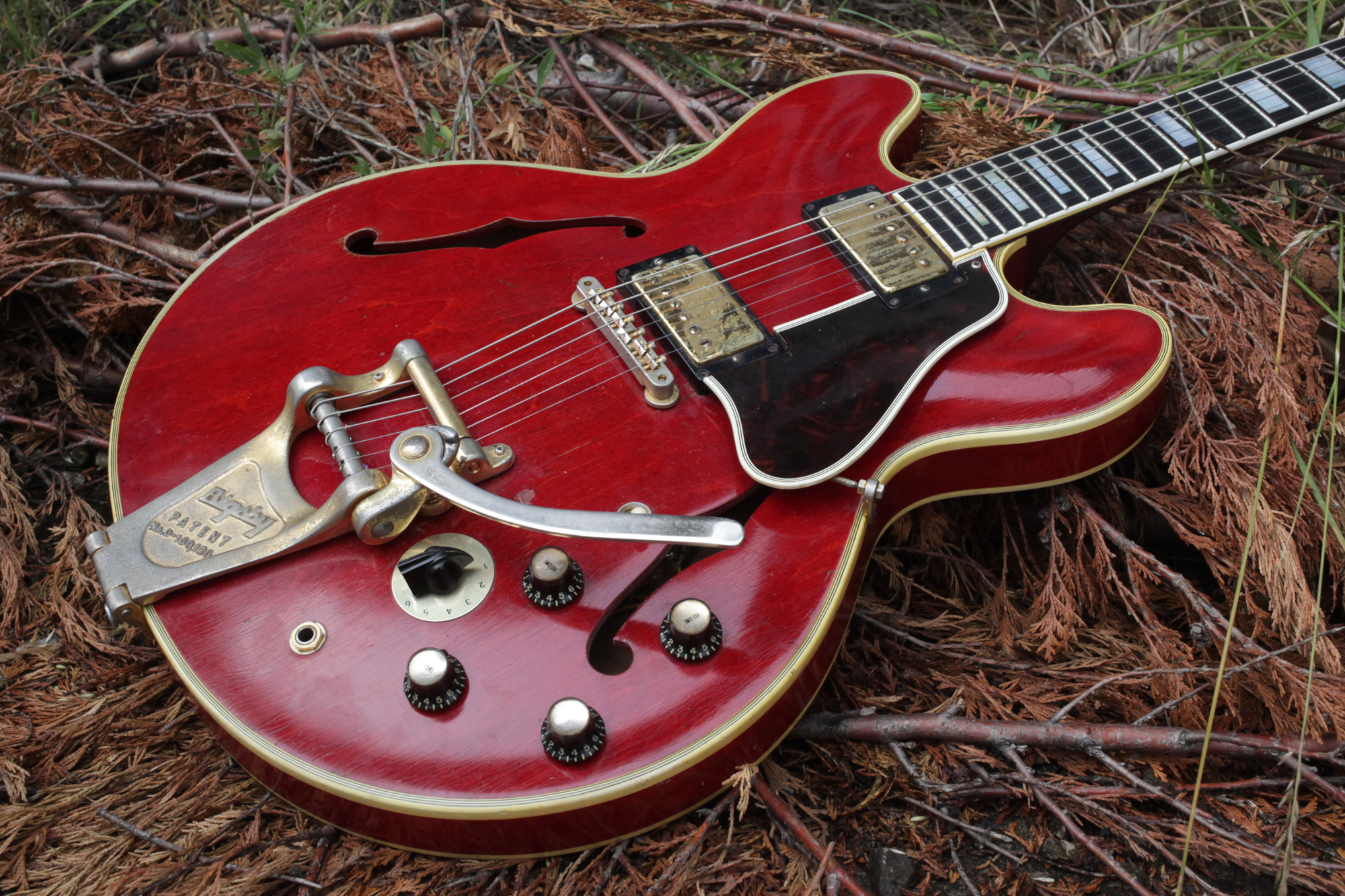 Something definitely changed in the lacquer around '66, and it's common to see '66-67 guitars with little to no checking, then the larger lines like the '69 start to come in.

Modern Gibson checking I've had a couple of guitars and it looked just like the OP's, although they were both Bozeman made acoustics. More often than not they just don't check but when they do it's not pretty.

This old MM has both It has taken a little while to resolve the problem but its time for an update.

The guitar was purchased from Andertons.co.uk, they refused to accept there was anything wrong with the guitar and said "It's nothing to worry about, and can actually be considered desirable as it'll make the guitar look like a vintage instrument! "

Andertons eventually agreed to have the guitar returned to them regarding the tuning instability.

The Andertons returns process was a hassle, they insisted the guitar was returned in the original packing box with all original contents and also this all had to be shipped in a larger outer box.

This reminded me that the guitar had been shipped to me from Andertons in just the original Gibson carton with no external box which was strange as usually the couriers only insure instruments that are "double boxed".

The SJ200 that i purchased at the same time came double boxed so i was able to use that outer box to return the Junior, the SJ200 did not have any cracking issue and would have been exposed to similar conditions but did have more protection during transit.

Andertons courier company missed a few collections but eventually they collected it.

I had requested that Andertons investigate the tuning instability and the cracking and discuss with Gibson re Gibson also physically examining the guitar.

6 weeks later the guitar was returned to me and i asked Andertons what they had found and what work had been carried out they said they had changed the strings and the finish checking is not covered under warranty so a string change was the full extent of their work.

The "case candy", (original documentation, strap, multitool, photograph ...) was not returned to me from Andertons.

Basically it had been a complete waste of time.

I also asked about the "double boxing" and Gibson said that the Gibson cardboard carton alone would not be protection against winter weather.

I know the guitar has been stored by me in a very stable environment but the guitar was shipped in December / January and delayed slightly due to the new year holiday so the guitar may well have been subjected to weather conditions that could have contributed or caused damage before it arrived with me which could have been avoided if Andertons had packed the guitar properly, (as per their requirements for returns).

After some discussion and photographs Gibson Europe agreed to replace the guitar under warranty.

It took another 8 weeks to ship the guitar to Gibson Europe and receive the replacement just this week, (i think this was slower than normal mostly due to covid related issues in Europe, both transport and within Gibson), i will say that the communication from Gibson Europe Customer Service was great.

I will buy Gibson guitars in the future but i certainly won't be rushing back to Andertons.co.uk
J

I am far from a Gibson fanboy, but it's good they were given the chance directly, came through, and that you reported their resposiveness. Big manufacturers get bad rep all the time and often times unfairly. The seller of that guitar let you down miserably IMO, and quite frankly, I wonder how much actual contact they had with Gibson........or if they had any at all.

Glad that you finally got this satisfactorily resolved and hope the new one brings enjoyment in spades!
You must log in or register to reply here.

G
What to use for filling small cracks in guitar body