guitar_paul1 said:
I'm with Chester P Squier and Sasquatchwisperer. A couple years ago I picked up a used closet queen Comanche custom shop for $1400 and it has a lot to love. So much so that I bought it on impulse.

The z coil pickups sound and look really cool. The switching on the pickups is extremely versatile. The honey colored maple cap is very pretty.

They are beautiful guitars, and the Z coil pickups are fabulous. I love them in my ASAT Z-3 semihollow. i think folks who try G&L guitars with Leo's MFD pickups either love them or hate them.
I love them. Everything sounds great in my basement. And my (1) Tele's alnico p'ups (a '52 AVRI) are wonderful.
But if I play out with the band, the G&L's just win every time. They are higher outpt, drive the front end of the pre-amp a little harder, "cut through the mix" better, and with proper tone control and amp eq adjustment, they are very toneful. I have G&L's from the '80's, and some from '07-'17. The ones i have kept are with excellent build quality, a variety of unique p'ups, neck profiles and cool features like the PTB tone control system on the s-style gtrs, the DFV vibrato bridge/tail-piece, and the saddle lock bridge on the ASAT specials, all Leo's creations. You can get really nice used USA ones for $700-900 if you watch and wait.

50sTeleneck said:
I read and watched videos on the G&L ASAT guitars. They look like a good value.

The American guitars are very good. The imports are kinda, well not consistant.
J

Have the bluesboys always had a seth lover in the neck?

jayroc1 said:
Have the bluesboys always had a seth lover in the neck?
Click to expand...

No; at some point they switched to their own in-house wound vintage-style humbucker but you can still get a the Duncan Seth Lover as an option if you go through the "Option Order" tier or go through their Custom Shop. The Fullerton Deluxe only comes with the G&L pickup.

The date of the change is buried somewhere in a long FAQ section on guitarsbyleo.com but I find that site hard to search - it's almost like they are stuck in the Boolean search era, like you're using Alta Vista in 1994.
J

EsquireOK said:
As my post stated, within the BBE era, the older, the better. The first 10 or 15 years of BBE management didn't do too much damage; they left most things alone, and kept prices down.

I started noticing a quality decline somewhere in the mid to late aughts, and it has only accelerated since then, IME. The "ME" in "IME" consists of about eight G&Ls purchased from that period, a solid 2/3 of which had uncharacteristic quality issues, based on their previously established reputation. Then the prices hiked quite a bit in the past 6 to 8 years, while the quality issues stayed the same, or got even worse. After my last new one, about two years ago, which had unacceptable quality issues at the price, I finally gave up on new ones, and reverted to "vintage" or early BBE only.

The pre-BBE era are top notch...but after this much time and real-world wear and tear, you have to watch out for neck issues (especially on the basses).

I have broad experience with G&Ls, across all eras. At present time, I own 25 G&Ls. I played my first circa 1990, and first owned one in 1996 (still own it). I have three early BBE era basses, and about 7 late BBE era instruments (a majority of these later ones being rare or one-off ones, so kept despite their flaws). A handful of Tributes too, one of which is better built than several of my U.S.A. ones. The rest are pre-BBE, some quite rare (El Toro, Interceptor, certain rare combos of colors and/or features, etc.). They are still my favorite guitar company, all things considered. I just would not buy a new one today.
Click to expand...

,I am thinking of selling my Fender limited edition American Pro strat Surf Green with matching head stock lefty.. It has a natural neck. I prefer a rose wood or anything darker style neck. With your experience is there a model you suggest? I was hoping to sell for ,1500 and try to pick up a g&l strat model for 500 or so. Possible? Thanks.

Jamzpl said:
,I am thinking of selling my Fender limited edition American Pro strat Surf Green with matching head stock lefty.. It has a natural neck. I prefer a rose wood or anything darker style neck. With your experience is there a model you suggest? I was hoping to sell for ,1500 and try to pick up a g&l strat model for 500 or so. Possible? Thanks.
Click to expand...

My first electric was (is) a Tribute ASAT Special. I have nothing but good things to say about it. I love the jumbo MFD’s!
Later I got an natural ash 2-piece ASAT Classic on a stupid deal. It is beautiful and very well made. I’ve been using it a lot lately in an effort to get sounds I like from the pick ups but I’m not 100% satisfied yet. I have some Tonerider Hot Classics to try if I give up on the originals.
Coincidently, a package showed up today with another stupid deal. It’s a Tribute Legacy, my first S-type guitar. I showed it to my wife on Saturday and bragged that I was exercising restraint and was going to skip buying it. So she bought it to surprise me! (She’ll be even more surprised when the Classic Vibe Jazzmaster I ordered yesterday shows up tomorrow!)

guitar_paul1 said:
I'm with Chester P Squier and Sasquatchwisperer. A couple years ago I picked up a used closet queen Comanche custom shop for $1400 and it has a lot to love. So much so that I bought it on impulse.

The z coil pickups sound and look really cool. The switching on the pickups is extremely versatile. The honey colored maple cap is very pretty.

Jamzpl said:
,I am thinking of selling my Fender limited edition American Pro strat Surf Green with matching head stock lefty.. It has a natural neck. I prefer a rose wood or anything darker style neck. With your experience is there a model you suggest? I was hoping to sell for ,1500 and try to pick up a g&l strat model for 500 or so. Possible? Thanks.
Click to expand...

Your $500 G&L would have to be a used lefty import model S-500 or Legacy, and it would be a significant quality downgrade from the guitar you already own...as well as harder to locate than a righty.

I love my current Teles (55 Thin Skin and Dave's 62) but lately been thinking about adding another Tele.

I have owned several G&L ASATs in the past and really enjoyed them. I am looking at USA ASATs now specifically for a Natural, Orange or Butterscotch finish at a reasonable price.

Looking through Reverb it seems used pricing (on Exc or Mint) are close and/or exceeding new prices.

I have also noticed as G&L is not a popular as Fender, there is a fair amount of new inventory available and dealers will make deals unlike Fender dealers who are not dealing much these days (given supply vs demand, I certainly understand this. But, as it's my money I am gonna watch it closely)

Anyone else here recently purchased a new USA G&L and if so what's your review? 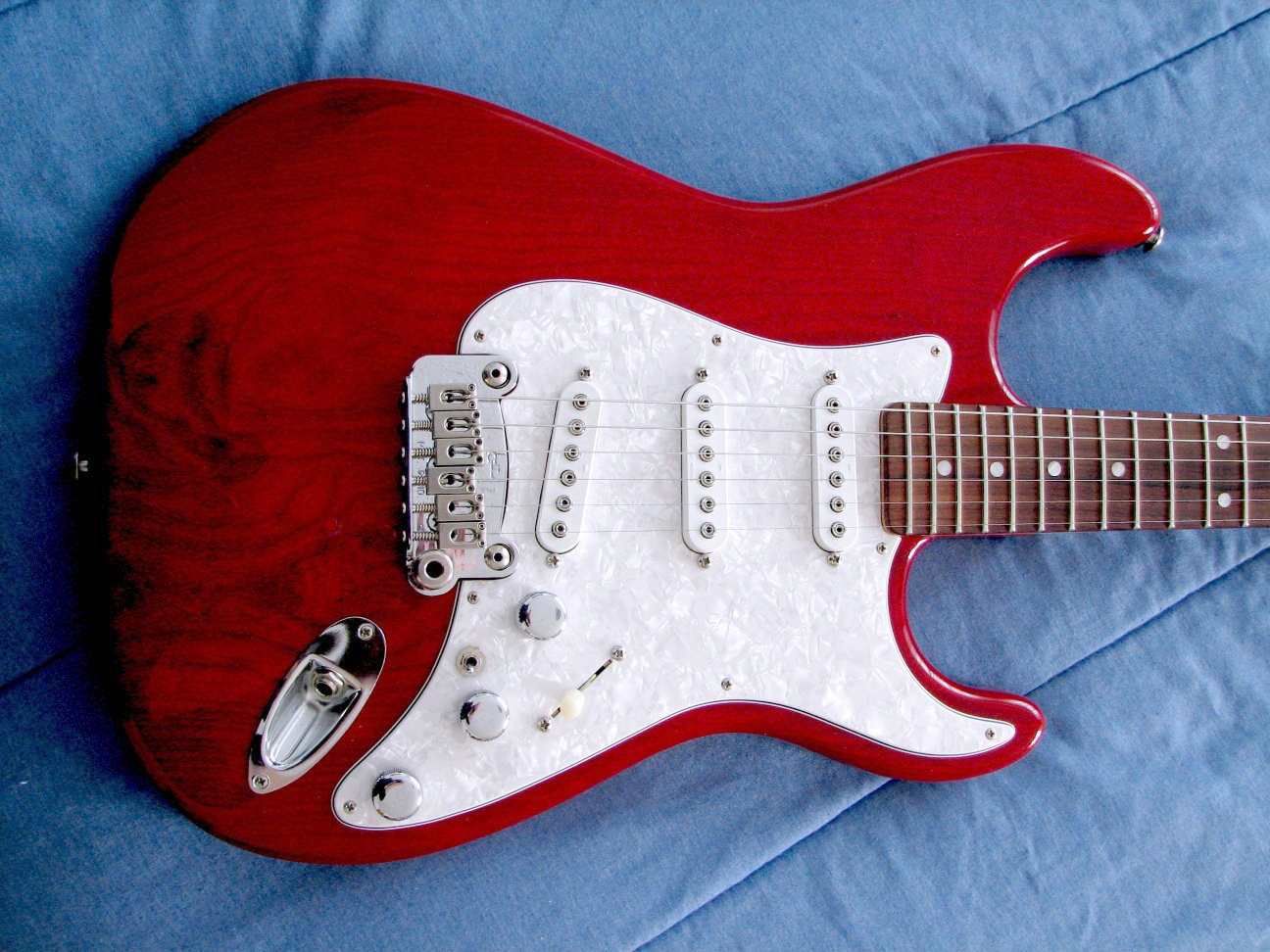 It has played more sessions than I would care to count. The build quality is absolutely outstanding and it has roved to be quite robust. After looking into the Fenders of the period I wasn't impressed and the G&Ls were more impressive. They advertised the S-500 as having a ready-to-record sound right out of the box and they aren't kidding. I have had, and want once again, a maple neck alder body Strat for its poppy sound but I love this guitar.

I just recently bought a 2016 Tribute Fallout. Indonesian. Seems as decent or better in some ways than Fenders overseas models. I don't know if they're made in the same factory or not.

I feel like G&L's hardware is superior on the overseas models. The bridges in particular. My tone pot is loose and it's not that old. It's a coil tapped one.....

So far I like the sound but the pups are Paul Gagon Humbucker and P90.

I have no clue which I prefer between Fender and G&L. I do feel like they're different enough that you get some options that Fender doesn't do. I think Fenders just look better in general but I can't really tell you why I think that.

All I know is that to me a lot of the new MIM Fenders I play, Player series, seem like they are slipping in quality. The Vinteras are very good in general. I haven't really played any americans of either cuz they're out of my price range so my experience comes from lower end stuff. I did own an American Standard Tele for a bit and I was, meh, about it.

The fall out neck shape is pretty thick from what I can tell. And the nut feels wider than my Affinity Tele. But I didn't measure.

I don't really understand all the options with pups on G&Ls yet. Like they're strat models. And I'm just starting to sort of understand how I like a Fender / Squier strat set up. LOL.

I think they both can work and have their upsides and downsides. And are of similar quality. But those bridges on the G&Ls... The tribute models.. just niiiiiiice.

Ordered (in stock) a new ASAT Classic in Butterscotch this afternoon.
Weighing in at a svelte 6.5lbs, it will live happily among my Thin Skins and contribute to my serenity.
Should arrive by end if the week
Last edited: Jul 27, 2021

I have a few guitars and have been slowly thinning by style. After having my Fullerton S-500d for a couple years I gave my MIJ Stratocaster (double barrel mod) to my brother. His son is gigging with it as his main axe.
IMHO the quality, playability and tone of the G&L is just superior and made that Strat feel like a toy.
I am not a “made in USA” only or brand name only person. I’ve been playing for a lifetime (or maybe two rock n roll lifetimes) and have seen a lot of guitars come and go- my G&L is a keeper
Last edited: Jul 27, 2021
You must log in or register to reply here.
Share:
Reddit Pinterest Tumblr WhatsApp Email Share Link