For aircraft enthusiasts: the very first dedicated night fighter which was too far ahead of its time. 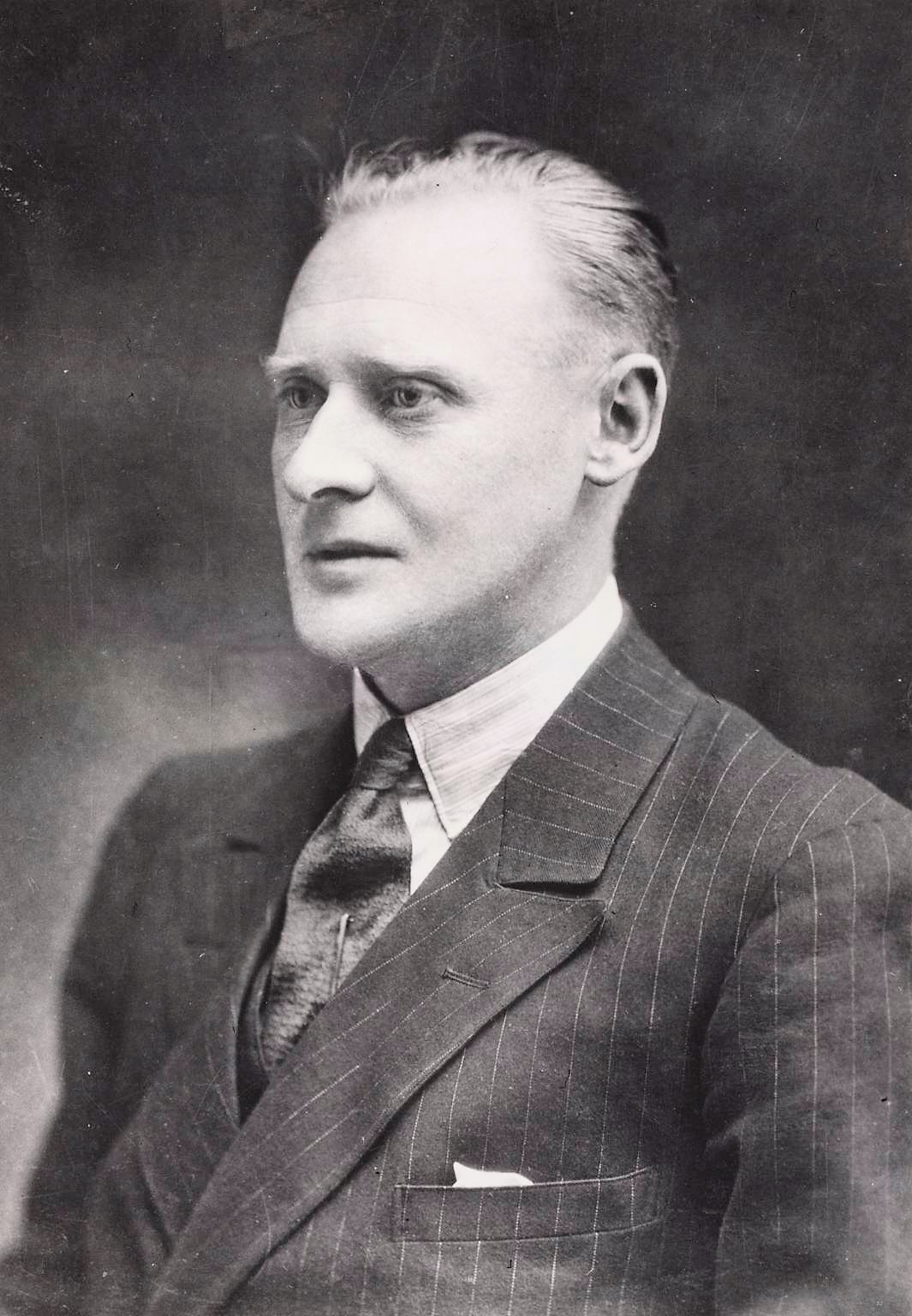 This is Reginald Joseph Mitchell, who will forever be remembered as being the father of the Supermarine Spitfire, which no matter how you slice it, is very much a legacy that nobody can surpass.

Early production model Spitfires with two blade wooden propellers. Mitchell himself would see nothing of the type's glory as he died in 1937 not long after the type entered service.

But everybody has to start somewhere, and it was all the way back in 1916 that Mitchell was hired by Supermarine to develop what was back then a brand-new concept in aviation. And it was to counter THESE.

Zeppelins, which during the first world war, were used by the Germans as long range high altitude bombers. Which struck English cities at night and with total impunity, because the interceptor aircraft of the time couldn't reach the altitude the blimps were cruising.

Also, with radar being a technology which didn't exist yet, and telephone being a technology in its infancy, those blimps were the Stealth aircraft of their day. They would appear out of nowhere, and because it took time to get the call in to the Interceptors to scramble and take care of them, got out of there scot-free.

So when Mitchell and his team got the order to develop a dedicated night fighter, they knew they had their work cut for them. How can you take down something which flies higher than any normal aircraft, and be there when it arrives on the scene and once it has, how can you spot it in the ink black skies?

They decided the best answer was THIS monster, a quad plane, twin engined beast they called the Nighthawk. 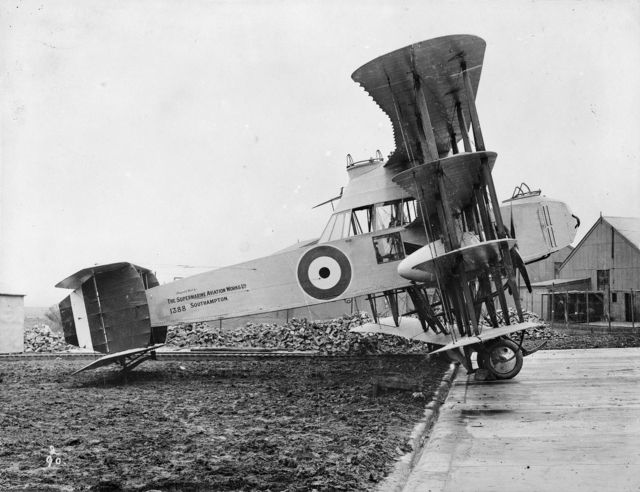 And a side view. So how was this behemoth supposed to take on a Zeppelin, what on earth were they THINKING?

Actually, what they were thinking about created a plane which incorporated some very innovative concepts which are commonplace in modern day aircraft. Such as:
- A fuel payload which enabled it to stay airborne for 18 hours on end.
- A crew rest area in the fuselage, so they could fly the plane in shifts.
- An enclosed cabin with a heater because as those poor saps had to fly at such high altitudes, they could freeze to death.
- A very powerful searchlight in the nose, so it could see the blimps in the night sky. It was for that reason why the plane also had a petrol powered generator onboard.
- Two turrets, one in the nose with a machine gun. And the other on top of the cabin with a heavy calibre cannon. 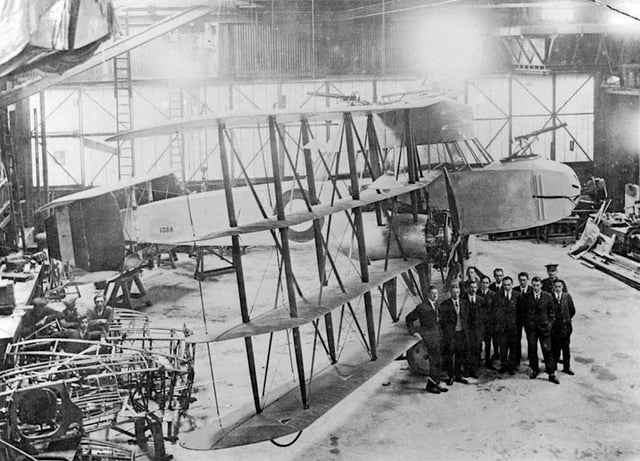 The sole Nighthawk in the assembly hall of Supermarine, showing its scale to dramatic effect.

So, so much forward-thinking, why was there only one made?

Well, when testing the aircraft, it was found that it took way too long to reach cruising altitude and it was so slow that even a Zeppelin could overtake it. And with aviation technology advancing at a very high rate, it was rendered obsolete pretty much straight away. As types such as the Sopwith Camel and the S.E.5 now were entering service with the performance to take out a Zeppelin with ease and needed far less time to do so.

So was R.J. Mitchell's first design a failure?
- As an interceptor for high-flying Zeppelins it was.
But take a look at long range maritime patrol aircraft that came around three decades later, such as the Lockheed P-2 Neptune or the Grumman S2F Tracker. They all took a page out off the concept of the Nighthawk since it ended up making such perfect sense.

A Neptune as operated by the Royal Netherlands Navy, its searchlight very clearly visible, a feature it got directly from the nighthawk.

Yeah, they made only one, but that sole Nighthawk was the right plane in the wrong era and in the wrong role.

The sole remaining part of the Nighthawk.
Last edited: Jul 2, 2022

Mitchell was a brilliant aircraft designer for sure. The Spitfire says it all, but he had been involved for many years, as the OP points out.

After his death in ‘37 ( cancer, wasn’t it?), one of his contemporaries said, “he was always trying to look over the horizon “.

Cheers Blazer, another good one. Thank, Blazer - always a treat to read your historical articles - I always learn something new!
PS - a personal interest for me... my dad served in the RAF in WWII, while my mum was busy building Halifax bombers!

The Supermarine S.6B designed by Mitchell for the Schneider Trophy first flew in 1931.

Surely the progenitor of the Spitfire and a thing of great beauty in its day.

As a kid I had a model of it

Thanks for reminding us of the genius of RJ Mitchell

Re nightfighters, I have a good book which was written by one of the Beaufighter pilots.

Thanks, very interesting. I have a WW1 aircraft obsession, so I've seen that crazy plane before.
Main problem was too many wings & not enough horse-power.
Someone was even mad enough to build a scale model from scratch. 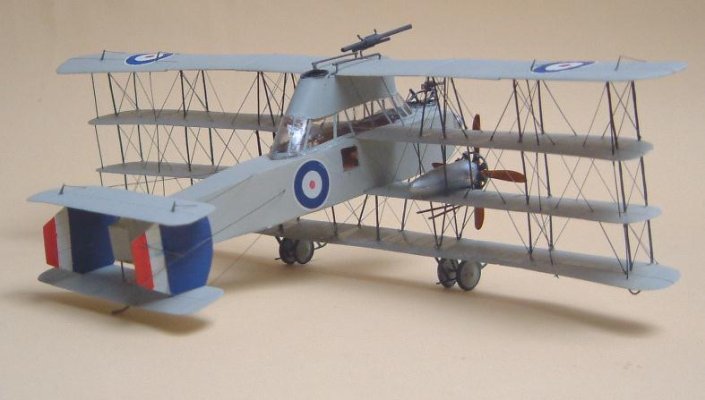 Mitchell had plenty of flops...things had to be learned emperically back then. There was (and still is) much wrong thinking in both specification and design.

Blazer's vignettes always send me off on enjoyable tangents of study.

The Nighthawk procurement specification was likely based on flawed and even silly requirements. No doubt there was a call for an "Aerial Battleship" to defend London. That 37mm cannon probably outweighed one of the planes engines (2X, 100hp 10-cyl Anzani).

Probably the best defensive tactic against Zepplin attack wasn't even tried until 1917...London turned off the lights, fired no AA and hid in the dark. It worked!

And the Northrup Black Widow

Is that an oil spot on the runway?

But in both cases, you guys posted the wrong version of the "Schwalbe."

THIS is the night fighter variant.

My dad was a flight engineer in a B-25 during WWII. He said flew several night 'very scary' night missions also. He finally ended up a major in the Air Force and mentioned that he wish he would have been part of this project. Enjoy

Can you do one on the Sopwith Camel and it’s brethren and their opponents?

And the Northrup Black Widow

No love for the Havoc? 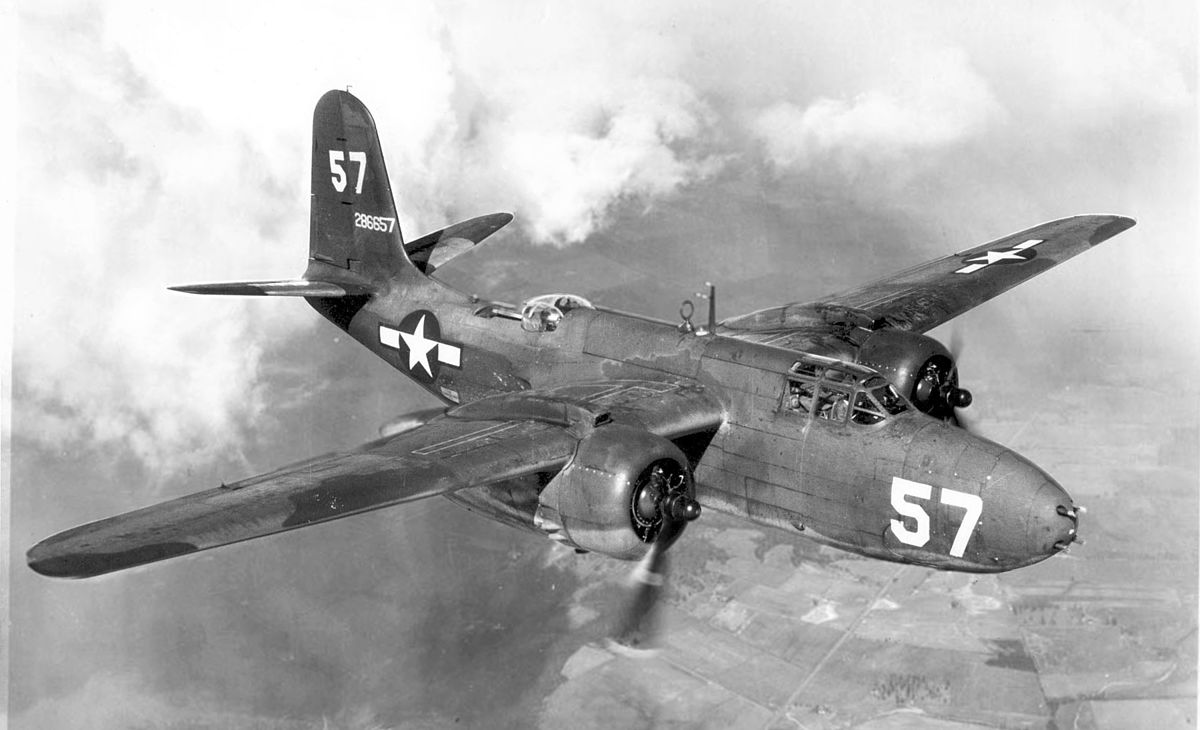 en.m.wikipedia.org
You must log in or register to reply here.

For aircraft Enthusiasts: On a wing and a prayer, ten more of the worst planes ever.
2