Foo Fighters announcing a Taylor Hawkins tribute concert in the UK and the USA.

Taylor Hawkins and Dave Grohl, "Brothers from different mothers" as they said.

Well if there's one word you can use to describe Dave Grohl, it's "Ambitious" he goes into doing whatever comes to mind with 150% drive. Of course losing Hawkins earlier this year meant that the future of the band is in doubt, the ball was with them: if they were to pack it all in, everybody would have understood. If they were to continue with a different drummer, everybody would understand too.

Anyway, I guess they decided to take a leaf out of the Freddie Mercury Tribute concert which happened 30 years ago this year and do their own version. 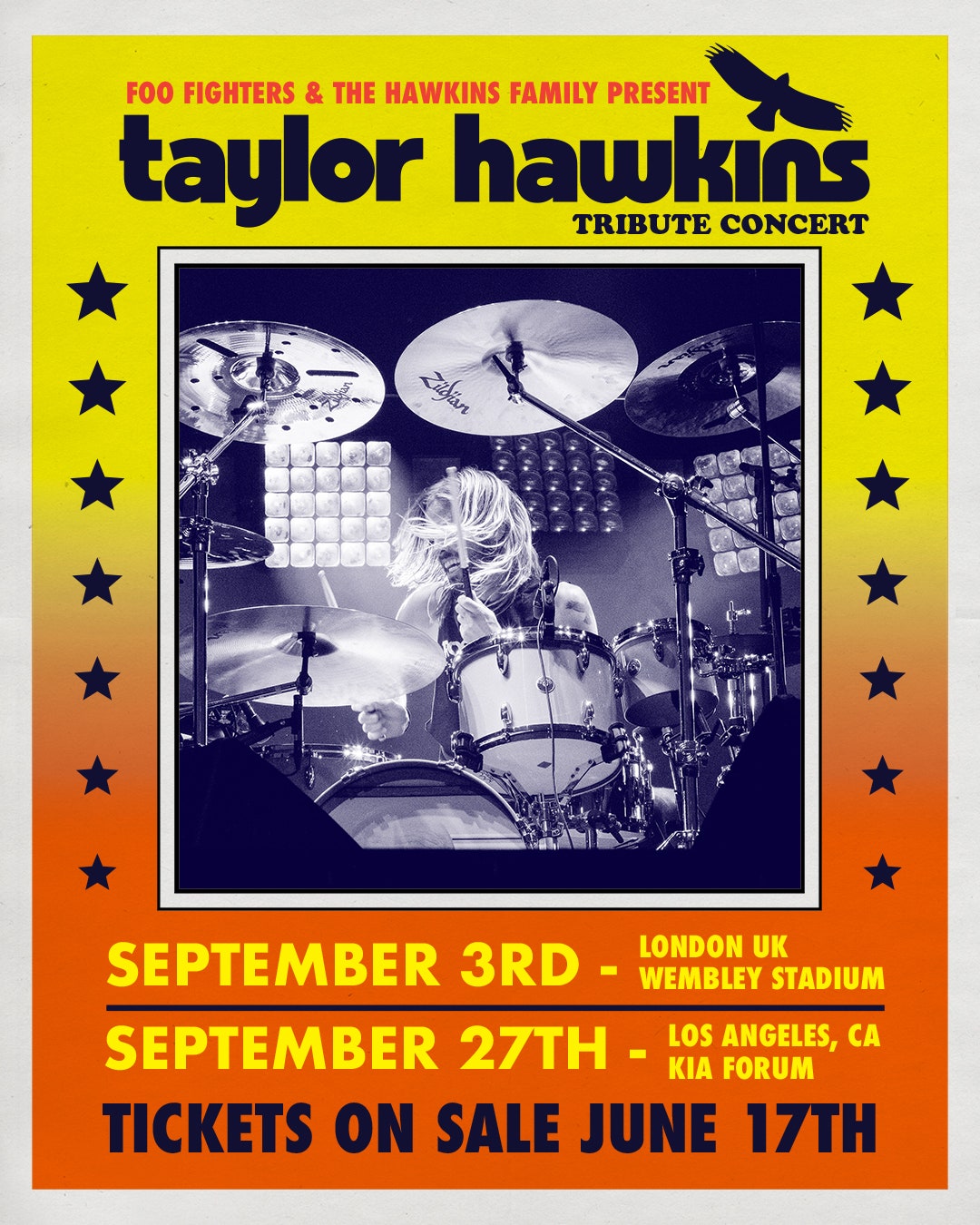 Dave Grohl, Nate Mendel, Chris Shiflett, Pat Smear and Rami Jaffee will come together with the Hawkins family to celebrate the life, music and love of their husband, father, brother and bandmate with The Taylor Hawkins Tribute Concerts.
As one of the most respected and beloved figures in modern music, Taylor’s monolithic talent and magnetic personality endeared him to millions of fans, peers, friends and fellow musical legends the world over. Millions mourned his untimely passing on March 25, with passionate and sincere tributes coming from fans as well as musicians Taylor idolized. The Taylor Hawkins Tribute Concerts will unite several of those artists, the Hawkins family and of course his Foo Fighters brothers in celebration of Taylor’s memory and his legacy as a global rock icon—his bandmates and his inspirations playing the songs that he fell in love with, and the ones he brought to life.
The all-star rock and roll shows will take place September 3 at London’s Wembley Stadium and September 27 at The Kia Forum in Los Angeles.
The lineups for each show will be announced shortly. Sign up to receive information on timings, ticketing links and on sale dates here.
Taylor Hawkins joined Foo Fighters in 1997, first appearing with the band on the tour supporting sophomore album The Colour & The Shape. He made his recorded debut with Foo Fighters with 1999’s There Is Nothing Left To Lose, playing on every subsequent FF album, including One By One, In Your Honor (the first FF album to feature him assuming lead vocal duties on his song “Cold Day In The Sun”), Echoes, Silence, Patience & Grace, Wasting Light, Sonic Highways, Concrete & Gold (also featuring him as lead singer on “Sunday Rain”) and Medicine at Midnight. As a member of Foo Fighters, Taylor was a 15-time GRAMMY Award winner and member of the Rock & Roll Hall of Fame. He lived and loved music to an insatiable degree, with Foo Fighters as well as his numerous solo and side projects and collaborations.
Click to expand...

Well, it sure got ME all riled up, so curious to see who shall be on that bill.

In the meantime, here's my own tribute to Taylor Hawkins.

I spent a day with Taylor & Dave at a rally & performance by the Foos. Dave is always moving , thinking and and has enough energy to power the town of Quartzite, a desert community .And easy thing to see, those guys were connected at the hip. They loved each other & it was obvious.
S

Saw them live in the early 2000's at the Salem Armory in Salem, Oregon. A pretty small venue.

Took my son. He still talks about it. It was a great concert.

Taylor, as well as the rest of the band were killin' it.

Wonder who the guest drummer will be?

There's some good live Alanis Morrisett footage out there with Taylor.

I read that title fast and thought it said "Tony Hawks" tribute tour.

Didn't think he was dead... and I couldn't see the connection.

I have a feeling that Dave had no problem finding Top-Shelf Talent willing to help out.

I’m sure Chad Smith will be there, and Matt Cameron because both of those guys were close with Taylor. On the other hand, they were also both involved in the recent Rolling Stone article about Taylor and Dave and Taylor having a hard time with the gig schedule recently and for the last couple years. don’t know if any of it is true.

So hopefully all of those rich survivors get everything patched up because Taylor Hawkins WAS rock ‘n’ roll. And he deserves a nice loud rocking sendoff.

By the way someone mentioned Alanis Morissette and that is the only time I ever saw Taylor Hawkins. It was one of those 90’s holiday alternative package shows by one of the local radio stations and Alanis was just about to blow up. They didn’t even do five songs but I couldn’t believe what I was seeing

. I said “who is that surfer dude on drums ? he is a freaking monster !”

And all the women that were with us were instantly in love!

teleman1 said:
I spent a day with Taylor & Dave at a rally & performance by the Foos. Dave is always moving , thinking and and has enough energy to power the town of Quartzite, a desert community .And easy thing to see, those guys were connected at the hip. They loved each other & it was obvious.
Click to expand...

Their bromance was very much like Bruce Springsteen and Clarence Clemons'.

Alanis Morissette said to Taylor at the end of the "Jagged little pill" tour that he was about to get the phone call from Dave, since the Foos were having trouble with William Goldsmith.


I saw the Foo Fighters only once in 2019 at the Pinkpop festival, and they were fantastic, a rock show in the truest sense of the word.

Although, it must be said, I would have LOVED to have seen them in 1997 just after Taylor joined, because that was them at their absolute best.

I was listening to the Color and the Shape and Nothing left to lose mix a few minutes ago before coming back to this thread, I saw it posted earlier today. It will be so hard to get tickets for those shows. I've seen them 5 times in concert, 4 of them in the LA area ( Long Beach, Irvine, Inglewood, Carson). I remember in 2006 when they were doing the Skin and Bones acoustic show at the Pantages theater I was so mad that I couldn't get a ticket and trying to call KROQ to win tickets. The last time I saw them was 2012 in Sacramento, it was an indoor arena and people were lighting up some weed and Dave goes "I didn't know Sacramento smelled like this" Hopefully it will be available live stream. I think the last 3 shows included Taylor singing “Cold Day in the Sun” and also my middle name is Taylor.
Last edited: Jun 15, 2022